Why Black or African American Citizens Are NOT Serving in Donald Trump's Administration!

“CNN has no black employees reporting to President Jeff Zucker...the news organization has no black executive producers...no black VP’s or senior VP’s on the news side.”

But @realDonaldTrump is ”RACIST”?"

Hello. Is INTRA-RACIAL DISCRIMINATION the reason there are no black or American citizens of African descent serving in Donald J. Trump's White House administration?

I'm referring to America's apparent illogical-thinking PRO BLACK community that in addition to engaging in nasty, HATEFUL name-calling, has in some instances threatened physical VIOLENCE toward peaceful black American citizens who PRO BLACK Americans believe are acting "TOO WHITE."

___​
Knowing he or she will become the target of PRO BLACK American HATE and possible violence, why would a successful, accomplished, free-thinking citizen join the President Donald Trump Administration! 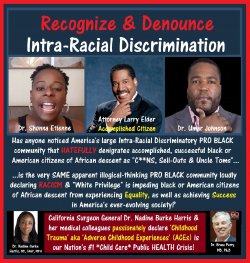 AOC has a non-white chief of staff--she must be racist
You must log in or register to reply here.

President sparring over WHCD next month

CNN Cannot Even Pretend to be Real News : R.Kelley?

"Blacks Are Taught To Hate America"
2 3

This Hyperventilating About Contraceptives is Overblown
4 5 6

at least 21 teenagers found dead in a South African club !