Is the proliferation of war-themed literature, movies, and comic books in the USA a sign of liberal attitudes towards the celebration and honoring of America's armed forces?

In the Soviet Union and North Korea and Communist Cuba, the celebration of the army has been a matter of nationalistic pride; during Nazi Germany, this 'ideal' was obviously taken to the extreme (i.e., the colored Nuremberg Rallies).

In America, war-honoring films such as Saving Private Ryan, war-pensive novels such as A Farewell to Arms, and the war-podium comics franchise G.I. Joe: A Real American Hero reveal a special attitude towards Americans serving in uniform.

Snake Eyes symbolizes the 'heart' of the patriotic G.I. Joes, while Cobra Commander is a symbol of the terrorism-fury of Cobra. Both 'soldiers' are masked 'knights' (one good, the other evil).

As we hype stories (on the Internet, in movies, in comics, etc.) which get circulated to America's youth, how do we differentiate between American patriotism (towards the military) and pseudo-fascist propaganda (as seen in Nazi Germany)?

Such questions are surprisingly important in this new age of media-gauged socio-politics.

Donald Trump defeated the first serious female contender (respected politician Hillary Clinton) for the office of U.S. president, even though he is a non-political 'civilian' (a businessman). How will his administration address concerns that the today's generation of American youngsters are as curious about 'pedestrian involvement' as they are about 'military intelligence'?

We all remember what movie-star president Ronald Reagan did for American economics; what will finance-wizard and celebrity-president Donald Trump do for American morale? How do we think of Trump in terms of U.S. armed forces support, given that Trump was satirized in the media-hysteria film Celebrity?

This may be the challenge of the Trump administration --- censorship.

President Trump eyed the battlefield-arena on which stood the two deadly super-soldiers Snake Eyes and Cobra Commander. In front of an audience of many in the Philadelphia Flyers Spectrum ice-hockey stadium (where Cobra had brought in the valiant 'G.I. Joe ninja' Snake Eyes as a hostage), Trump had to introduce Cobra Commander and Snake Eyes as the two ultimate 'gladiators.' The G.I. Joes had been vying with the diabolical terrorist organization Cobra for some time now, and now they kidnapped Snake Eyes and brought him into the Spectrum (during a game in which President Trump was a special spectator) for a gladiatorial match.

If Snake Eyes won the battle, Cobra would retreat, but if Cobra Commander won the contest, then President Trump would be taken away by Cobra and held as ransom until the G.I. Joe leader Duke surrendered to Cobra Commander and the new Cobra 'emperor' Serpentor. President Trump felt the worry lines on his forehead as perspiration ran down his face. "Geez, if Snake Eyes loses, all hope is lost!" he muttered to himself. Snake Eyes stood on the ice-rink (which was now cleared as all the Flyers players and competing Penguins players exited the 'stage' to allow the 'battle' to begin) and stared at Cobra Commander who stood across from him.

Cobra Commander held a hockey-stick in his hand, and Snake Eyes had a hockey-stick in his. Neither had ice-skates and had to balance themselves while running towards each other on the slick ice-rink. President Trump was enraged that the CIA was unable to anticipate this pseudo-terrorist event but remained hopeful that Snake Eyes could take down the ruthless Cobra Commander and that the G.I. Joes would arrive in time to clear out the Cobra forces which had garrisoned the Spectrum very effectively. All TV cameras where shut off, and the parking lot was patrolled by Cobra drones with machine-guns and bazookas.

Snake Eyes started running towards Cobra Commander. When he reached the terrorist creep, he swiped Cobra Commander's legs from under him, causing him to fall down. However, Cobra Commander used his leg to swipe out one of Snake Eyes' legs, causing him to fall down as well. As the two men both got up simultaneously and backed away from each other to prepare for their next offensive maneuver, President Trump yelled, "Go, Snake Eyes!" Suddenly, Duke's G.I. Joe forces arrived by hang-gliders and swooped down on ropes from the Spectrum skylight. However, Snake Eyes ordered the G.I. Joes to back off and simply man the Cobra drones as he personally dealt with Cobra Commander. 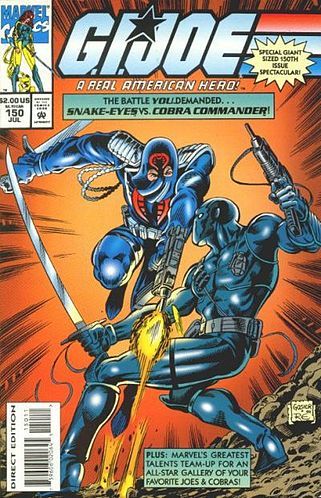 “Is the proliferation of war-themed literature, movies, and comic books in the USA a sign of liberal attitudes towards the celebration and honoring of America's armed forces? “


No, it's a sign that Hollywood and publishers want to make money. You will understand better when you get out of mommy's basement and into the real world.
You must log in or register to reply here.

CDZ How Would You Enhance/Fix the Olympics?
2 3