Has Team Romney forgotten that the Bush years were terrible? - The Washington Post

Not just Romney is pretending that Bush was not among the very worst presidents we've ever had. Just read the posts here.

Interesting however, that none of the Clown Candidates have mentioned gDub.

Whether or not the R/rw's want to say it out loud, we cannot afford to go back to the FAILED tinkle down that Reagan started and other pubs have championed. We can't afford another pub-puppet-plutocracy-president, which is what Mitt would be.

Obama told a crowd of some 9,000 in the battleground state of Virginia that Romney was backtracking on his conservative-leaning promises.

"He's forgetting what his own positions are, and he's betting that you will, too. I mean, he's changing up so much and backtracking and sidestepping, we've gotta ... name this condition that he's going through," Obama said.

"I think it's called Romnesia," he said to hoots and applause from the crowd.
Obama took the riff on amnesia to great length, describing "symptoms" that coincided with Romney's positions on abortion and taxes for the wealthy.

The act of forgetting a position or belief that you had previously expressed the opposite point of view with regards to.

He didn't forget that it wasn't about a video did he?
K

obama already lost Virginia, he can say anything he wants.

obama is making the mistakes that are going to cost him the election. It's all about how bad Romney is, but nothing about how good obama is. It would be difficult because his record is so bad, but he's not even making a show of doing so. Because his fall back position is to only attack Romney, he's repeating himself and people are tuning him out and moving on. They've heard it all before, an hour ago. Move over here where Romney has something to say that's worth listening to.

Too bad Obama didn't think of that joke sooner because he could have used it last night. I think "Romnesia" must be highly contagious because many in Washington, including Obama, seem to suffer from it.

Name one politician who kept his campaign promises or didn't "evolve" on certain issues.

Katzndogz has a point. Incumbents have a clear record to run on. It's usually the challengers that do most of the criticizing on the economy. Obama has been there 4 years and has been busy. Lots to talk about other than taking hits at his opposition.
Last edited: Oct 19, 2012

Probably didn't even both talking about that.

Probably didn't even both talking about that.
Click to expand...

Obamatrons like to forget Obama's lack of a record.
OP

And so ACCURATE!!
OP

We have got to name this condition he is going through. I think it is called Romnesia. I think that's what it is called. Now I'm not a medical doctor. But I do want to go over some of the symptoms with you because I want to make sure nobody else catches it.

If you say you will protect a women's right to choose but you stand up in a primary debate and say you'd be delighted to sign a law outlawing that right to choose in all cases, then you have definitely got Romnesia.

"If you come down with a case of Romnesia and you can't seem to remember the policies that are still on your website, or the promises you have made over the six years you've been running for president, here is the good news: Obamacare covers pre-existing conditions," Obama bellowed. "We can fix you up. We've got a cure. We can make you well."
Click to expand...

Obama Turns From Jokes to Jab About 'Romnesia'

This is great stuff, I love it!!

If for a moment Thursday night, President Obama and Mitt Romney could enjoy a brief respite from an otherwise contentious campaign, by today they had put away their jokes and were back to practicing their jabs.

After an evening spent in white ties and tails at the Al Smith dinner gently ribbing each other, the tone of those jokes today turned much more pointed, as the two men readied for their third and final debate in Florida on Monday.

At an event at George Mason University today, the president was still making jokes, but they carried a punch.

"[Romney is] changing up so much and backtracking and side stepping we've got to name this condition he's going through," said the president.

"I think it's called'Romnesia,'" he added to cheers and laughter. "I'm not a medical doctor, but I do want to go over some of the symptoms with you because I want to make sure nobody else catches it."

After stumping in Virginia today, the president will spend the weekend at Camp David preparing for the debate.

Romney headed to Boca Raton, site of the debate where he will hold a fundraiser and then begin another round of debate prep.
Click to expand...

Your guy has racked up more than 533 LIES.

Every day, he comes up with some new line he thinks you might like so he flip flops.

He has ROMNESIA! And, try as you might, you simply cannot deny that.

luddly.neddite said:
Has Team Romney forgotten that the Bush years were terrible? - The Washington Post

Not just Romney is pretending that Bush was not among the very worst presidents we've ever had. Just read the posts here.

Interesting however, that none of the Clown Candidates have mentioned gDub.

Whether or not the R/rw's want to say it out loud, we cannot afford to go back to the FAILED tinkle down that Reagan started and other pubs have championed. We can't afford another pub-puppet-plutocracy-president, which is what Mitt would be.

Charles_Main said:
I thought you guys killed the GOP in 2008.

This may be the last GOP chance to win the WH. The populations of many of the southern and midwest states are less white and more people of color. They need very badly to win to have a shot at putting another right winger on the Court. But things aren't looking so good.

I mean Obama basically sat out the first debate, and Romney is still trailing...I think the Romnesia comment was incredibly funny. Maybe the Boss can write another song about it!

You left-wing nutters are grabbing more tenuous talking points by the day.

Do you fools have ANY idea how fucking DESPERATE you're coming across?

Obama is gonna give me a heartattack. He was not overly excited at his convention speech. He was practically asleep at the first debate. I watched some of his rally today. (Will watch rest soon.)

This guy does not really kick in until his back is up hard against the wall. He needs a fight to fight. I guess it finally got close enough for him be himself. It is not enough for everyone to love him, like Clinton, he needs people to need him. That's how he got Obamacare passed.

Everybody please note when the thread was started. I think the President owes the OP some royalties.

That is too funny. Maybe someone was catching up on their quality reading.
OP

candycorn said:
Everybody please note when the thread was started. I think the President owes the OP some royalties.
Click to expand...

I just noticed that too. WTH? I think the mods must have gotten confused when they were combining the Romnesia threads. I can't think of any other reason for a post that old to suddenly be at the top of two threads that were started today.

BUT - what I wrote is still true.


ROMNESIA​
is an incredibly funny way to draw attention to 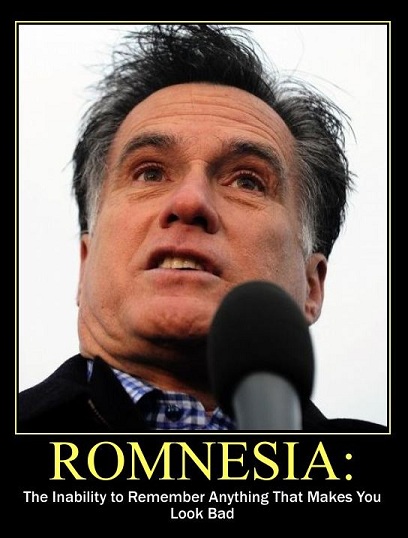 L.A. Bureaucrats Shut Down Restaurants for Selling Groceries Without a Permit