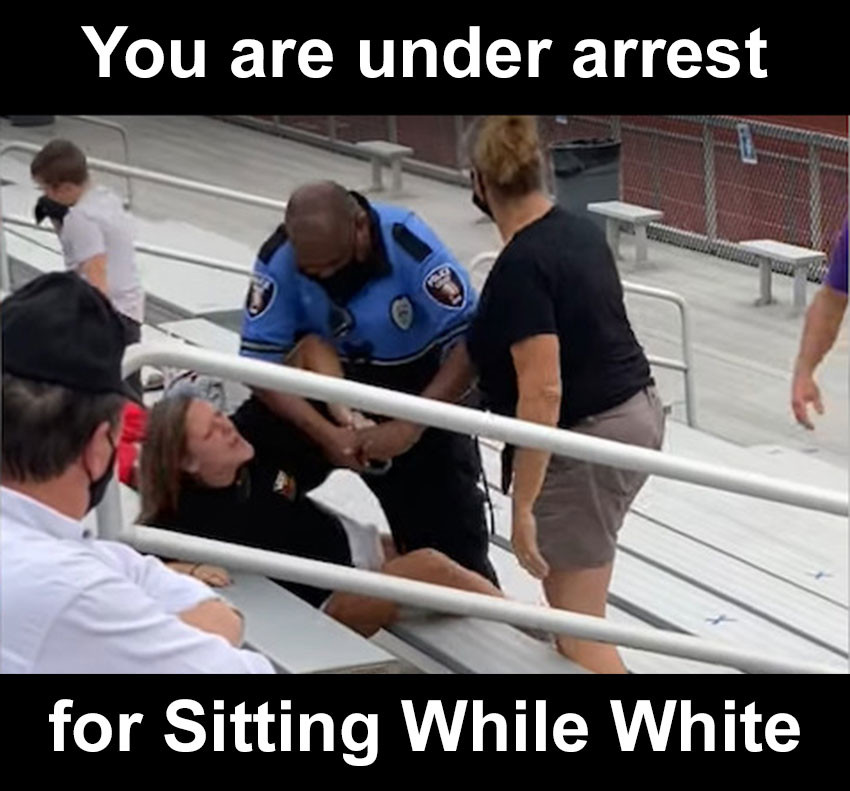 She should not have resisted. I am serious about that. One should obey lawful orders, and handle it in court. Everyone should know that by now, but no one seems to.

We need to educate our youth on how to interact with law enforcement and also to be respectful of the country that gives them the amazing freedoms that they exercise and occasionally abuse.
Click to expand...

they didnt give her a lawful order,,,thats the problem,,,

what we teach our youth is how to stand against tyranny not submit to it,,,and she did that by resisting,,,
Click to expand...

I consider it to generally be a lawful order when a LEO orders one to do something. It can be handled in court after that.

A cop tells you to get out of the vehicle, you do so. Leave the stadium you do so. Or maybe you go limp, but you don't fight them for being potentially wrong.

If they tell you to put your hands behind your back, you do so, or face the consequences. I expect officers to use force to effect an arrest. If it's a wrongful arrest, forceful resistance is not justified unless there is life or limb at stake.

I can totally relate to not wearing a mask. I don't wear one except at work where they pay me to do so. Resisting arrest is a different matter entirely.

If this was a private venue, the case would be cut & dry, but this is a public venue. Her case clearly needs to be heard in court.

youre allowed to be a useful idiot as much as you want,,,just dont drag us with you,,,
Click to expand...

No need for the ad hominem. Those are usually resorted to when one runs out of rational arguments.

I am sure you can think of one if you try hard.

Perhaps you could try replying substantively to a point that I made and you disagree with.

what rational discussion is left,,
you said youre OK with cops tazing and arresting a women for not following something that isnt law and I'm against that kind of a Nazi action and attitude,,,
Click to expand...

I didn't exactly say that. I said she should have complied and handled it in court. There was no need for things to escalate to this point, but she chose to do so.

Life is full of choices, and choices have consequences.

Everyone thinks they can disobey cops these days, I don't think that is right, even when the cops might be wrong. In this case, It's arguable if she was not following the law. I am on her side with regard to the freedom to not wear a mask, but I am not at all in favor of her resisting arrest with force. That's not a peaceful protest, and I am sick of lawlessness. I tend to #BackTheBlue .

this is a perfect example of acceptable civil disobedience,,,

what pisses me off is all the people that sat back and let it happen,,, if it were me I would have gone to jail with her,,
Click to expand...

Thanks. That is certainly putting your money where your mouth is. I fully respect that, but please be nice to all police officers; they have such a difficult job.

Ya know, I went to court this week for jury duty. I did not wear a mask all day. No one bothered me about it, except one Karen. Had the judge told me to put one on, I would have. And then I would have gone home and probably written a letter to the court.

I thought she was very nice about it,,, the cop was an authoritarian dick though,,
keep in mind he violated social distancing when he attacked her,,, sorry ,,arrested her,,,

LOL, Arguing for free stuff to Republican voters. A large fraction of us actually pay federal income taxes, while about 50% of the US population pays none at all.

Trump made me lots of promises that I never really expected him to keep. But in his first three years, he had already done his best to keep most of them. That's a sign of honesty and integrity, and something few politicians do (name ONE). My support for Trump is much stronger now than when I voted for him.

There are more than 62M other Americans who feel like I do, I bet.

I also think that a lot of moderate Democrats are unlikely to even show up, as they can't in good conscience pull a lever for riots, BLM, defunding the police, letting criminals out of jail, shutting down the economy for a flu-like virus, and basically, anarchy and erosion of freedoms.

On 11/08/2016, I had a feeling that Trump was actually going to win, after thinking about all of the rallies and signs everywhere. It was a movement like we had not seen in a while.

This year, I am much more optimistic. His support is so much stronger.

It's going to be a landslide. And we are going to MAKE AMERICA EVEN GREATER.

Trump has already done the following...,

- Replaced NAFTA with USMCA.
- New trade deal with China, replacing TPP.
- Building the Wall.
- Mexico indirectly paying for the wall (USMCA, troops in Mexico now helping to protect our border under threats of more tariffs if they stop).
- Withdrew from Paris Climate Accord.
- Must cancel two new regulations for each one passed.
- Two new SCOTUS justices that are Constitutionalists. Maybe another soon.
- ISIS pretty much devastated; don't even hear much about them anymore.
- Immigration restrictions for certain countries where a significant fraction of the population is likely to desire harm to the US.
- Obamacare is no longer mandatory.
- Tax bill passed & hundreds of companies invest in the US by hiking wages and giving bonuses.
- Stock market rocketed.
- Fake media is being recognized.
- President shames NFL kneelers.
- US negotiates from a position of strength again.
- Jerusalem is recognized as the capital of Israel.
- Manufacturing coming back after Obama said it would never happen.
- Lowest African American employment ever.
- Lowest Hispanic unemployment ever.
- Lowest female unemployment in decades.
- Terminated Obama's Iran deal, resulting in their economy collapsing.
- Obliterated Iran's top commander, Soleimani, who orchestrated an attack on the US embassy in Iraq and was planning more.
- North Korea releases US hostages and returns remains of 55 soldiers.
- North Korea has not launched long-range rockets nor set off atomic weapons.
- NATO members are paying more.
- Millions of Americans off welfare and food stamps.
- America is leading in energy production again, even exporting oil to China.
- Military and law enforcement are respected by the executive branch again.
- Close to flipping the 9th circuit court, by appointing 10 judges to it, (Obama appointed seven)
- Normalization of relations between Israel and the UAE and Bahrain. Maybe five more countries to come.

It's quite a legacy.

Use contraceptives so that you don't have to kill a baby. 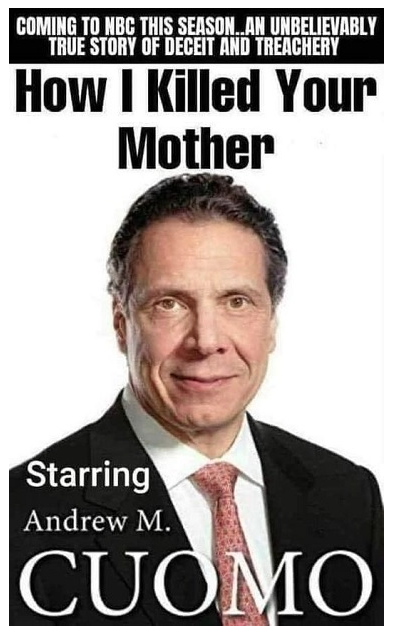 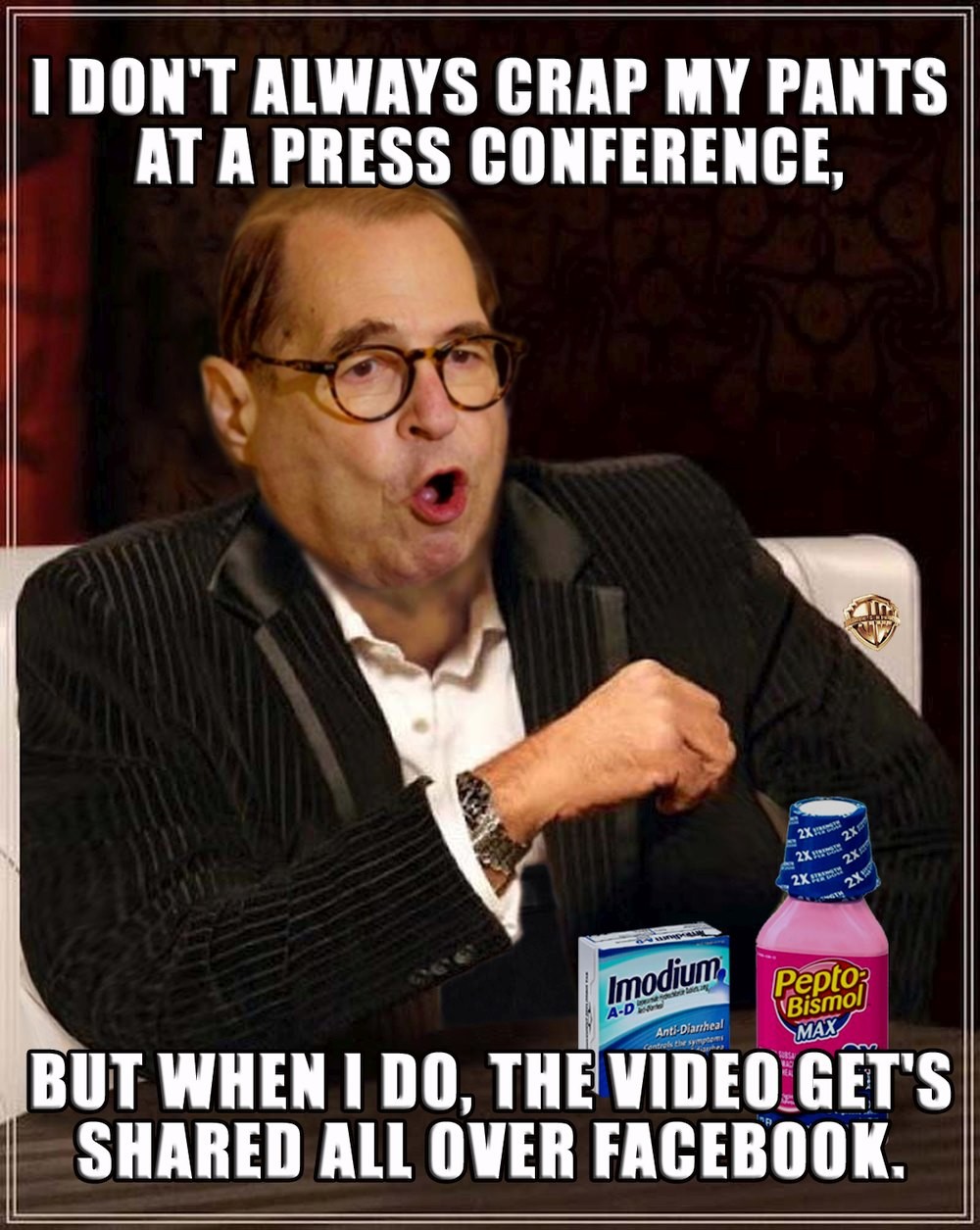 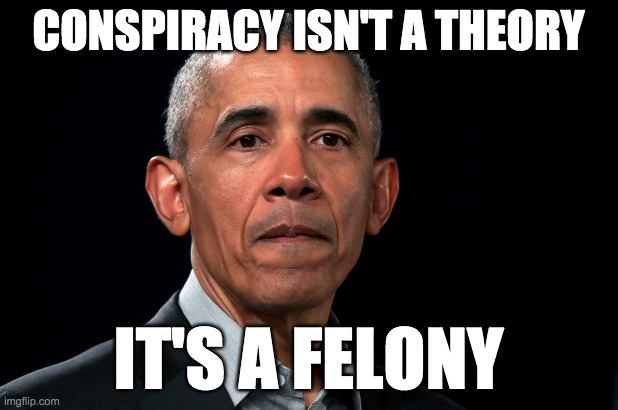 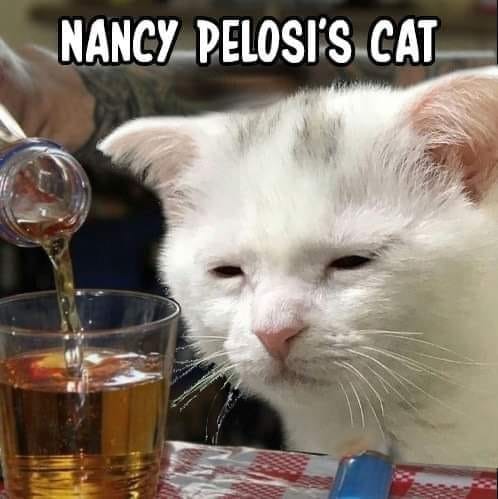 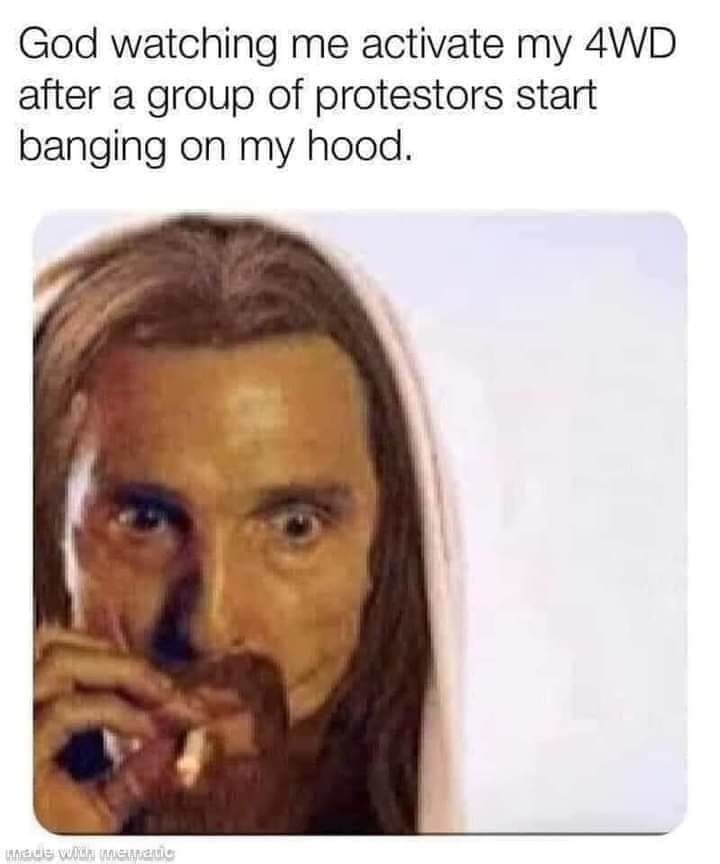 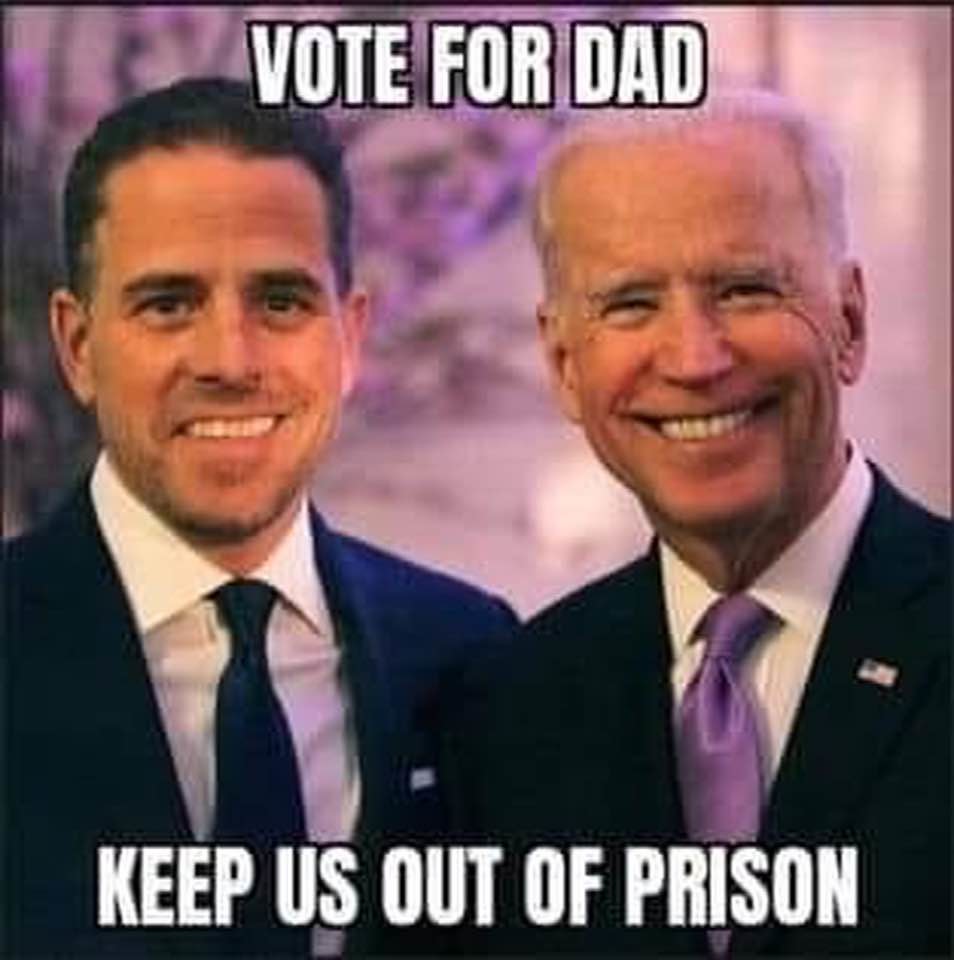 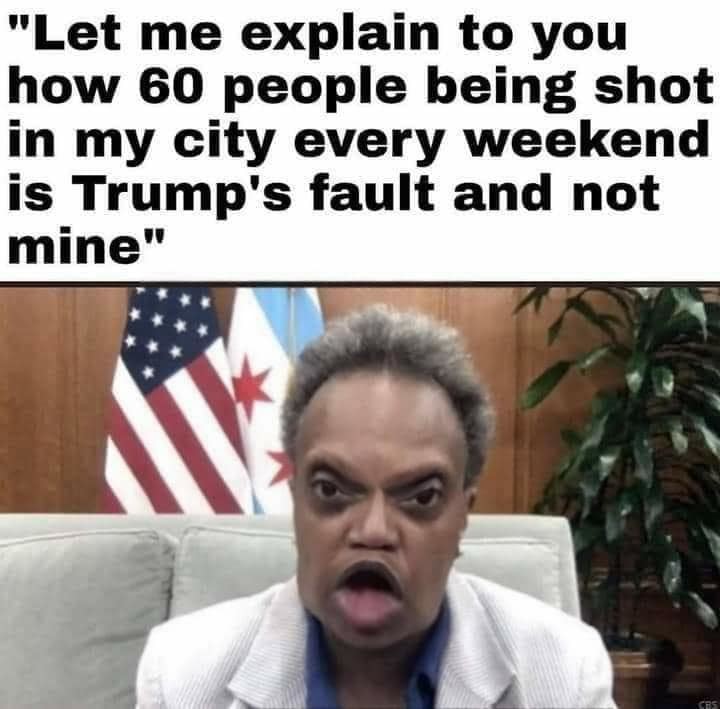 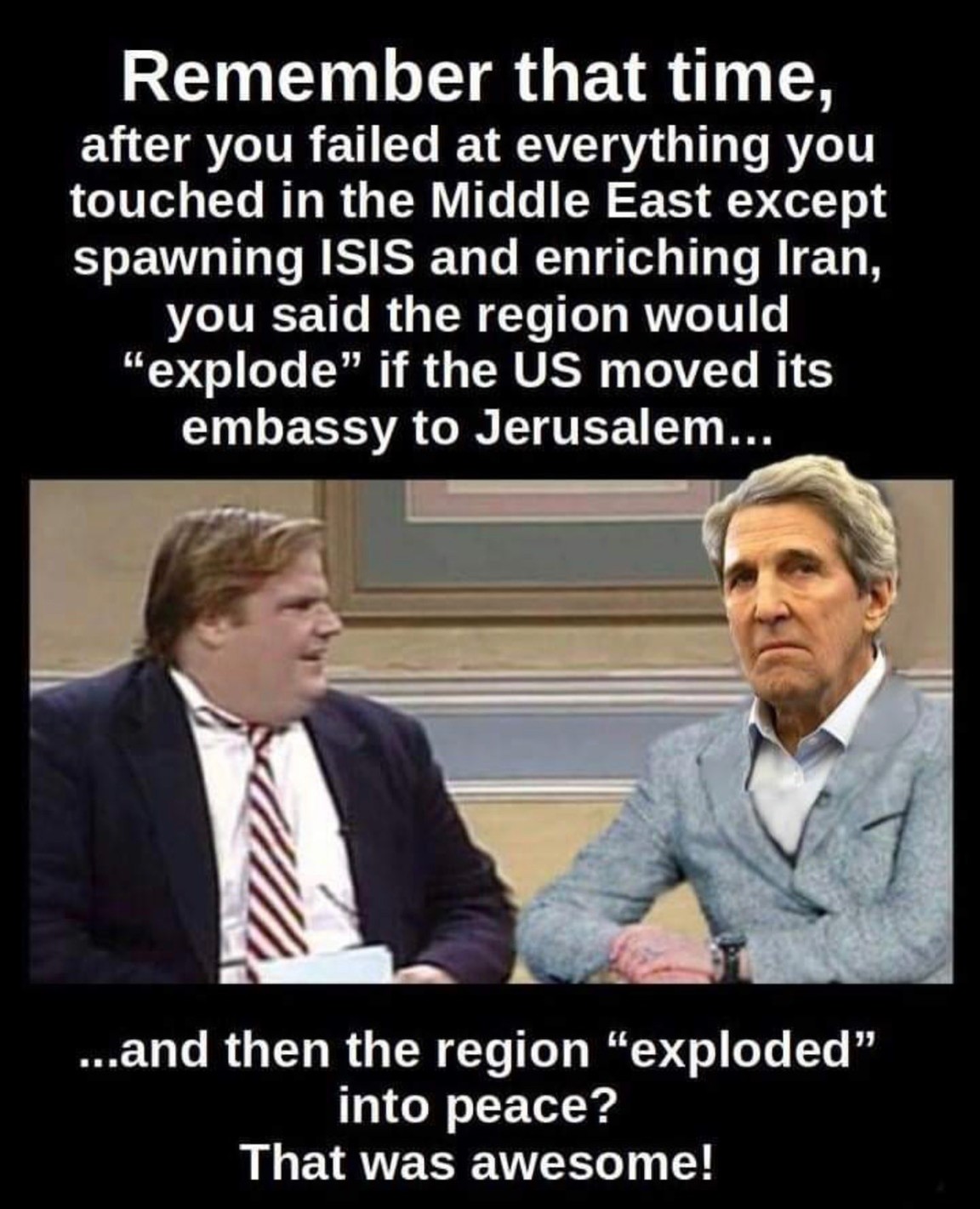 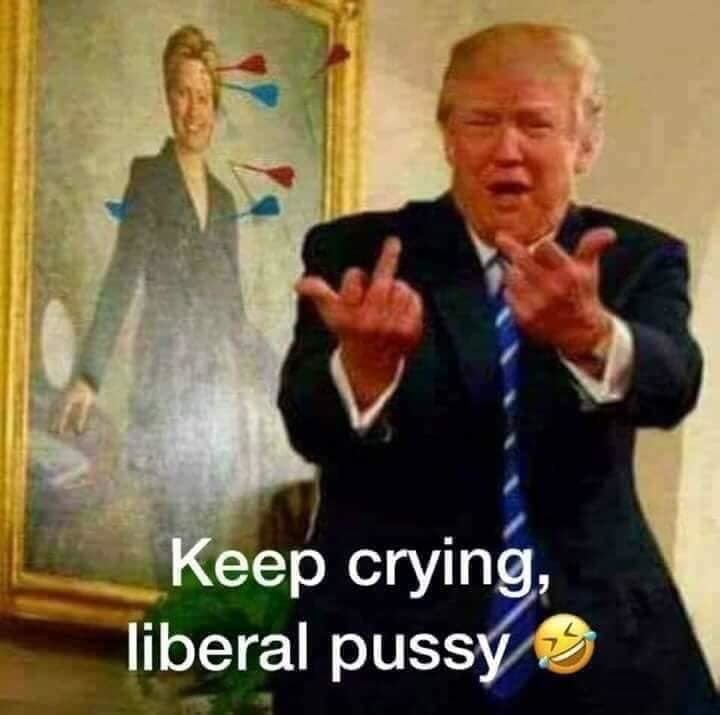 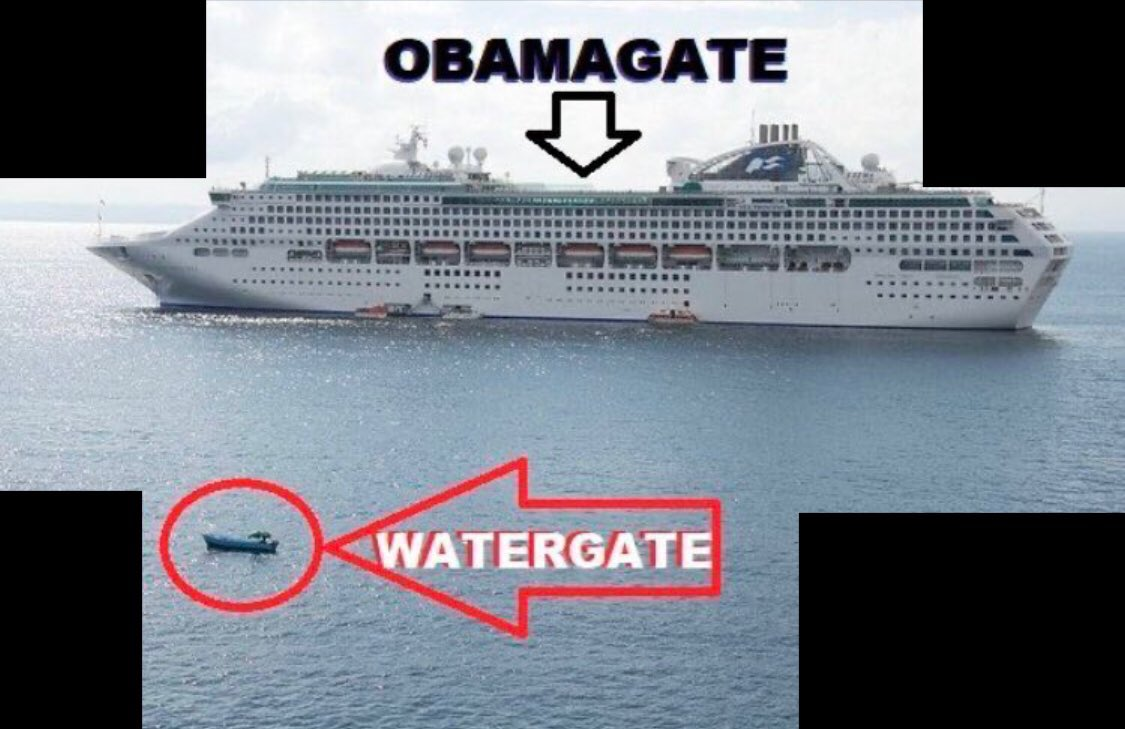 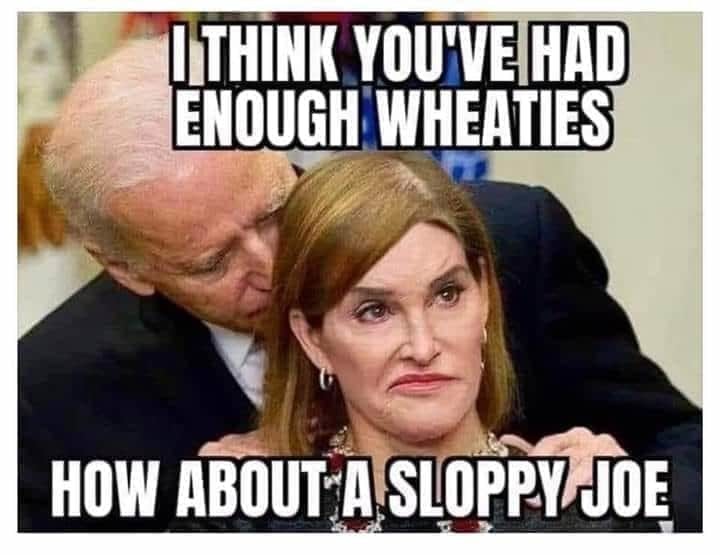 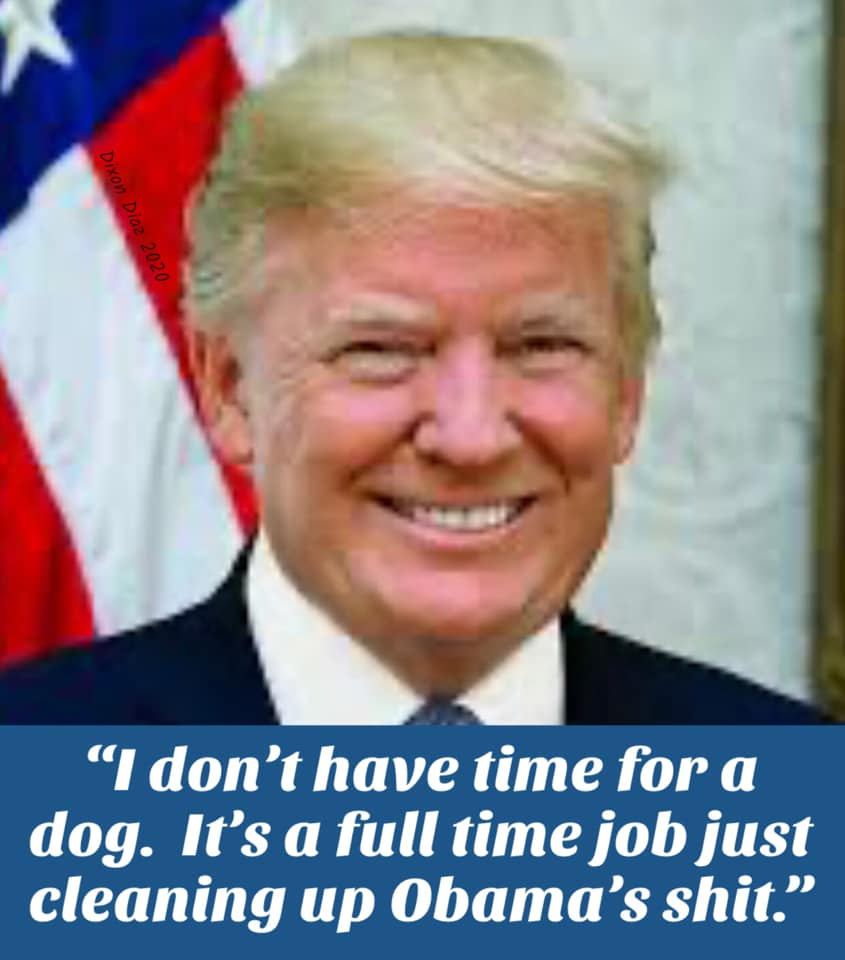 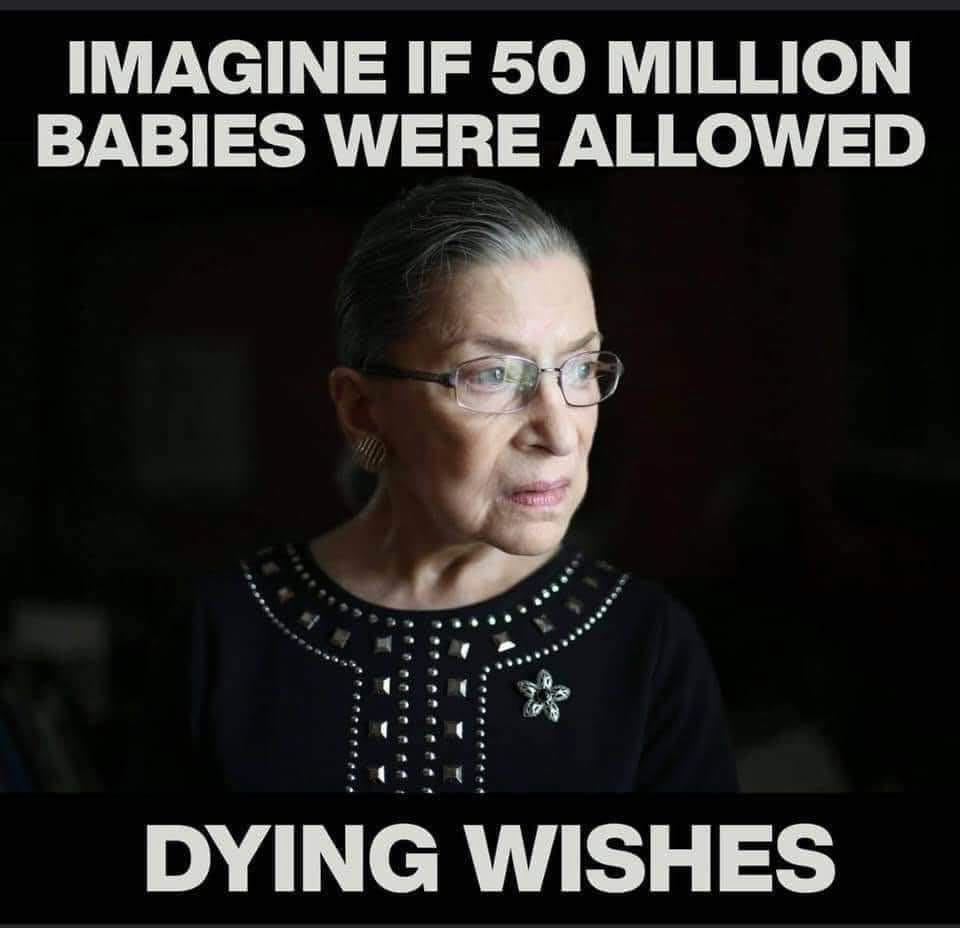 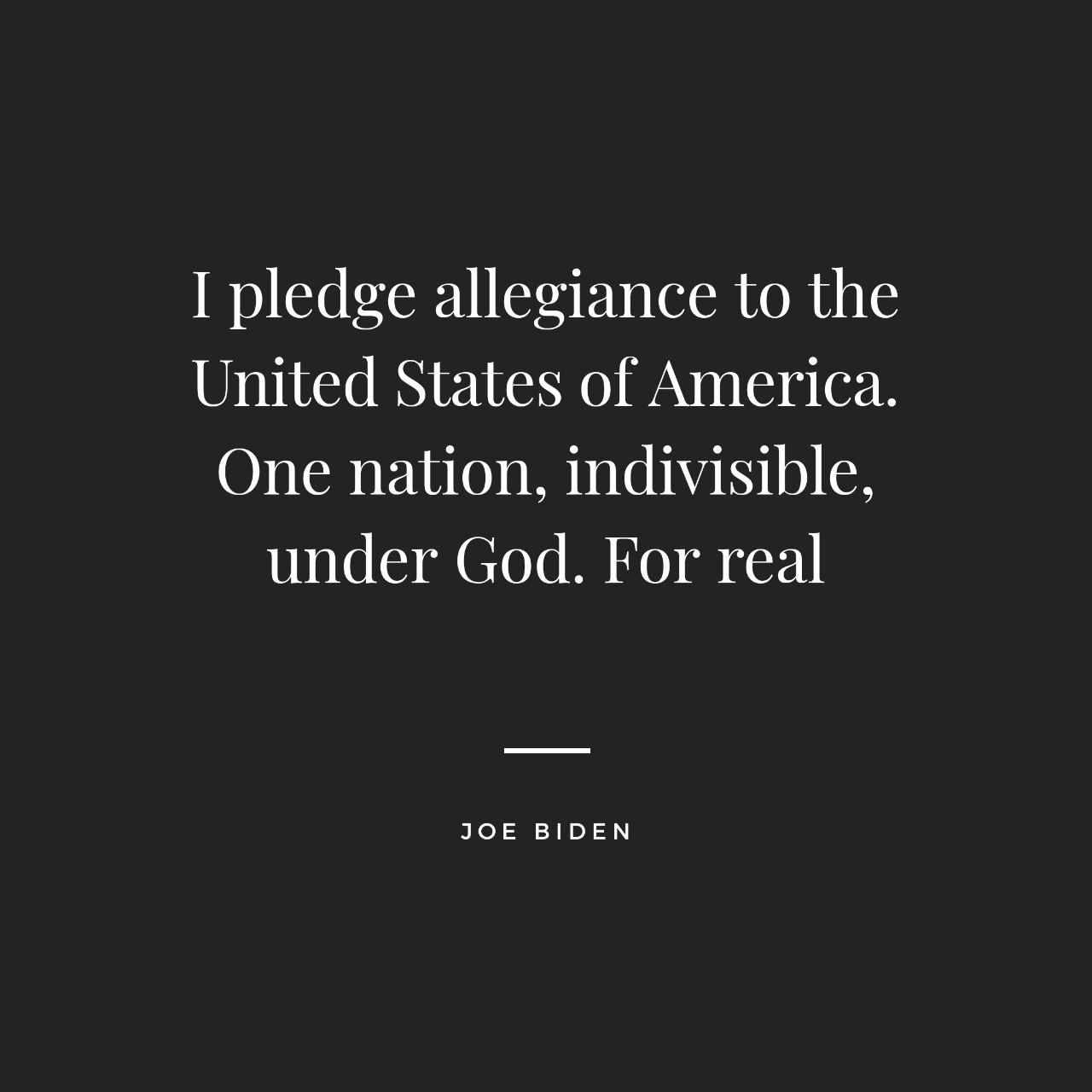 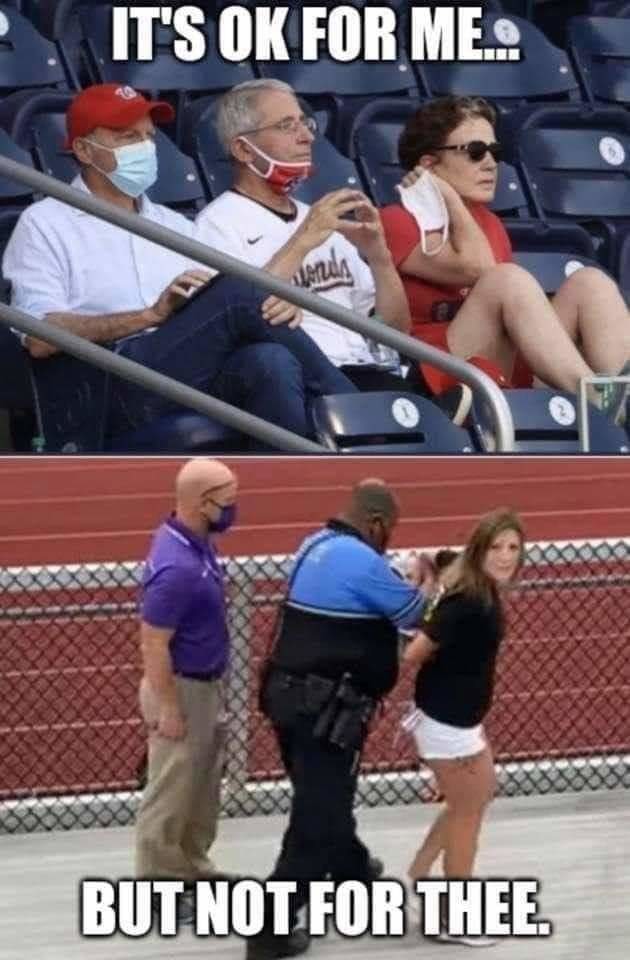 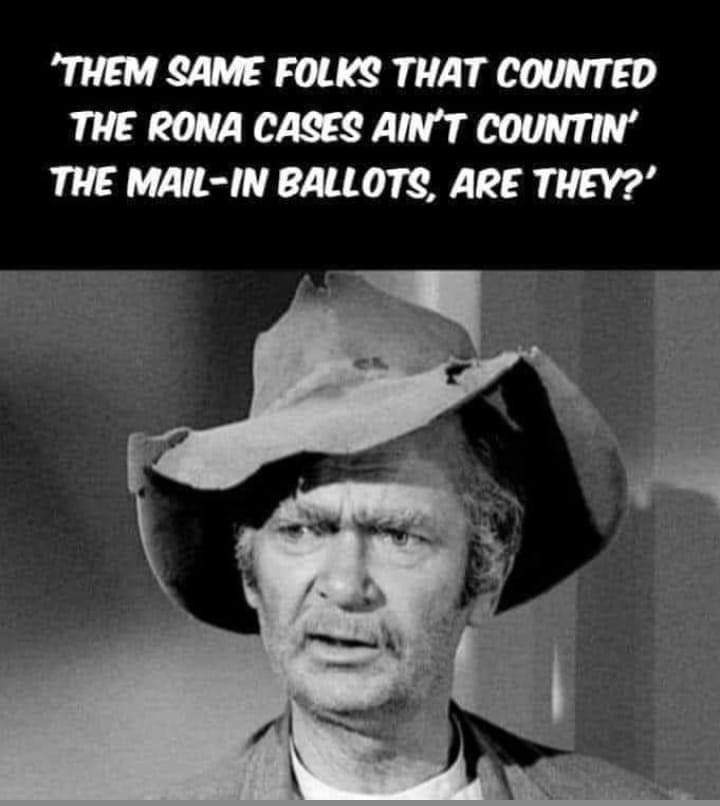 You keep hearing how the "RICH" dont pay their fair share, but use the infrastructure and other stuff the Progs keep saying...But!!!!
2

Can China be sanctioned by the UN and forced to pay reparations to every nation on earth affect by the CHINA VIRUS?
2

What was the worst you have ever been hurt in a fight?
2