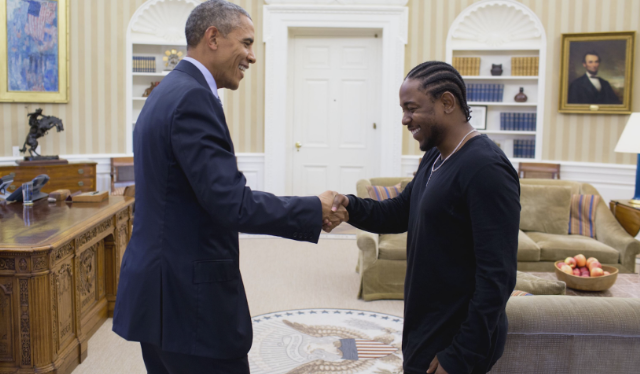 Quite A Interesting Read About Kendrick Lamar!
​
With all due respect to Kendrick Lamar, isn't he a mega-popular American recording artist rapping and speaking about his adult and childhood depression from dealing with the torment of being deprived of experiencing and enjoying an 'Average Joe' American kid childhood by his "living wild" VIOLENT FELON family members?

Reading his raps and public interviews Kendrick laments that he never experienced Safe Streets in a peaceful neighborhood for him, his three siblings, his many cousins, school classmates and neighborhood friends to travel and play on.

I'm not hating on, Kendrick. I genuinely feel sorry for him or any child witnessing his "living wild" family members or neighbors playing with shotguns and selling dope in front of the home six-year-old Kendrick, his siblings and cousins were suppose to feel safe in.

I am guessing the torment young Kendrick's mind experienced flip-flopping between the values his educators were trying to instill, and the values he was 'forced under duress' to comply with in his "living wild" family environment and in his community's 'Street Hustle' culture would cause a thoughtful, caring, gentle person to become depressed, angry and frustrated.

I admire that Kendrick has half-walked away from that life. I understand why he is reluctant to fully walk way from the Gangsta 'community/people harming' culture that is the foundation for his tormented life, as well as his wealth and fame.

If he listened to President Obama's (aka America's Premier Presidential & Parental Figure) remarks about Violent Felons having access to guns and mentioning six-year-old children becoming victims of gun violence, I wondered what thoughts crossed Kendrick's mind?

Considering the community and people harming anti-social lifestyle his "living wild" Violent Felon caretakers chose for him to witness and experience during a critical period of his emotional development, I wonder if Kendrick views himself as a victim of gun violence?

Clearly, if Kendrick Lamar desires to become a common person genuinely deserving of the title "The Chosen One," in my mind his focus should be on finding ways to help kids avoid the torment he experienced as a child.

Kendrick still has a few realities to squarely face and painful truths to accept and reveal. Once he has, I'm hopeful he will make the right choices.

*(NY Times May 18, 2015 - Rise in Suicide by Black Children Surprises Researchers)*
___________________
Robert K. Ross, MD, President and CEO of The California Endowment, gives a compelling overview of the role that exposure to childhood trauma plays in the lives of *troubled* and chronically ill Americans.

Smoking or what year was I in.

Donald Trump Had a Standing Order for Declassification of Docs

Most delusional story I've seen in a while. Of course, it's about Trump.