Even if they are from WAY the hell back in the day. For instance; Anne Rice. I've never read her works. Any fans? Dean Koontz? Stephen King? I've got a Kindle gift certificate, and I want to branch out from my usual fantasy fare.
*
*
*

George RR Martin !! a song of ice and fire series !!

Tom Clancy
Vince Flynn - he has cancer. I hope he makes a full and speedy recovery. 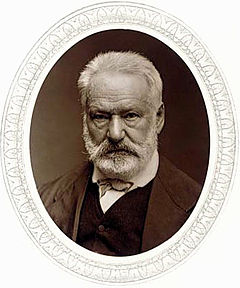 Victor Hugo was devastated when his oldest and favorite daughter, Léopoldine, died at age 19 in 1843, shortly after her marriage. She drowned in the Seine at Villequier, pulled down by her heavy skirts, when a boat overturned. Her young husband Charles Vacquerie also died trying to save her. Victor Hugo was traveling with his mistress at the time in the south of France, and learned about Léopoldine's death from a newspaper as he sat in a cafe.[2] He describes his shock and grief in his poem À Villequier:

Alas! turning an envious eye towards the past,
unconsolable by anything on earth,
I keep looking at that moment of my life
when I saw her open her wings and fly away!

I will see that instant until I die,
that instant&#8212;too much for tears!
when I cried out: "The child that I had just now--
what! I don't have her any more!"
Click to expand...

He wrote many poems afterwards about his daughter's life and death, and at least one biographer claims he never completely recovered from it. His most famous poem is probably Demain, dès l'aube, in which he describes visiting her grave.

Les Miserables made a huge impact upon my young mind. His poetry as well.

BDBoop said:
Even if they are from WAY the hell back in the day. For instance; Anne Rice. I've never read her works. Any fans? Dean Koontz? Stephen King? I've got a Kindle gift certificate, and I want to branch out from my usual fantasy fare.
Click to expand...

You could do a lot worse than to check in to Harlan Ellison. He writes a lot of short stories, some of which are science fiction, some are creepy, some are downright funny as hell.

But, no matter what the vehicle he uses (fantasy, science fiction, real life, etc), all his writings have a unique perspective on the human condition.

If you can find it, I recommend "Gentleman Junkie and Other Stories of the Hung Up Generation".

Vladimir Voinovich
Men build too many walls and not enough bridges.

H.P. Lovecraft, the author Steven King so ineptly "borrowed" from.
This board needs an enema!

One author you can't get on kindle you should trot on down to the bookstore and buy anyway is Robert Graves. If you get nothing else, get I Claudius.
Men build too many walls and not enough bridges.

A back in the day author. These 2 books are not read in a day nor in a week. You want a taste of what the war in Europe was about and how it affected the people, these 2 books are a must read. I like thick books and the characters here become a part of your life from the very beginning.
Behind my smile is everything youll never understand..​

If you like black humor, try anything by Carl Hiassen.

The Communist Manifesto and Capital : a critique of political economy by Karl Marx
The Protestant ethic and the spirit of capitalism by Max Weber
The Elementary Forms of Religious Life by Emile Durkheim
The Structure of Social Action by Talcott Parsons
Social Theory and Social Structure by Robert K. Merton
Class and Class Conflict in Industrial Society by Ralf Dahrendorf
The Sociological Imagination by C. Wright Mills
The Polish peasant in Europe and America by William Isaac Thomas
Coming of age in Samoa by Margaret Mead
The Social Construction of Reality by Peter L. Berger
A Social History of Anthropology in the U.S. by Thomas C. Patterson
Myth and Meaning by Claude Lévi-Strauss
This board needs an enema!

You won't be sorry

BDBoop said:
Even if they are from WAY the hell back in the day. For instance; Anne Rice. I've never read her works. Any fans? Dean Koontz? Stephen King? I've got a Kindle gift certificate, and I want to branch out from my usual fantasy fare.
Click to expand...

Why People Believe Weird Things, by Michael Shermer. Helps explain the echo chamber. Can't be read in one sitting or fully grasped in one reading.

One of my favorite page turners is Shogun ,by James Clavell.
Last edited: Oct 15, 2011
Anyone who supports DJT is a fool

IDIOT-GRAM: a phrase or one sentence post which lacks substance & is not thoughtful or thought provoking.

Sucks. Game of thrones without the badly written love and honor crap would be good reading.
S

Joe McGinness "The Rogue". A very funny book.
B

A new author I enjoyed:

Taylor Stevens "The Informationist"
You must log in or register to reply here.

The Voice of the Night (Dean Koontz)

Fraud Alert: This One Is For The Ladies
2 3

Names of the fallen

A moment ago
themirrorthief
T

"Just Say That The Election Was Corrupt, And Leave The Rest To Me And Congressional Allies"
6 7 8

They Identified The ‘Enemy’
2