Milley, McKenzie say they recommended 2,500 troops stay in Afghanistan, after Biden claims he was never told

Godboy said:
Hey moron, you do realize most of the Taliban fighters were in Pakistan in May, right? The Taliban cant mobilize to fight in May because its too cold. No fight would have taken place at that time. Youre dumb.
Click to expand...

They live there
.
The Jerk Store called….They are running out of YOU!

rightwinger said:
That is ridiculous
Taliban has always been in Afghanistan waiting for our withdrawal

"In winter, roads are blocked and mountains are covered with snow in parts of the war-ravaged country that slows fighting and the Taliban usually allow many of its commanders to put down their weapons. The long break lasts until a "spring offensive" is declared, normally in late April or early May, which marks the beginning of the annual fighting season." Senile Joe has either lied, or his dementia has reared it's head.
The civil war has started, the only thing that is missing are the bullets.

You've already applauded Quid Pro for modifying TRUMP!'s plan, this is another thing he could have modified. Since it's his responsibility, he owns this result.
OP

Pakistan, Taliban and the Afghan Quagmire​ 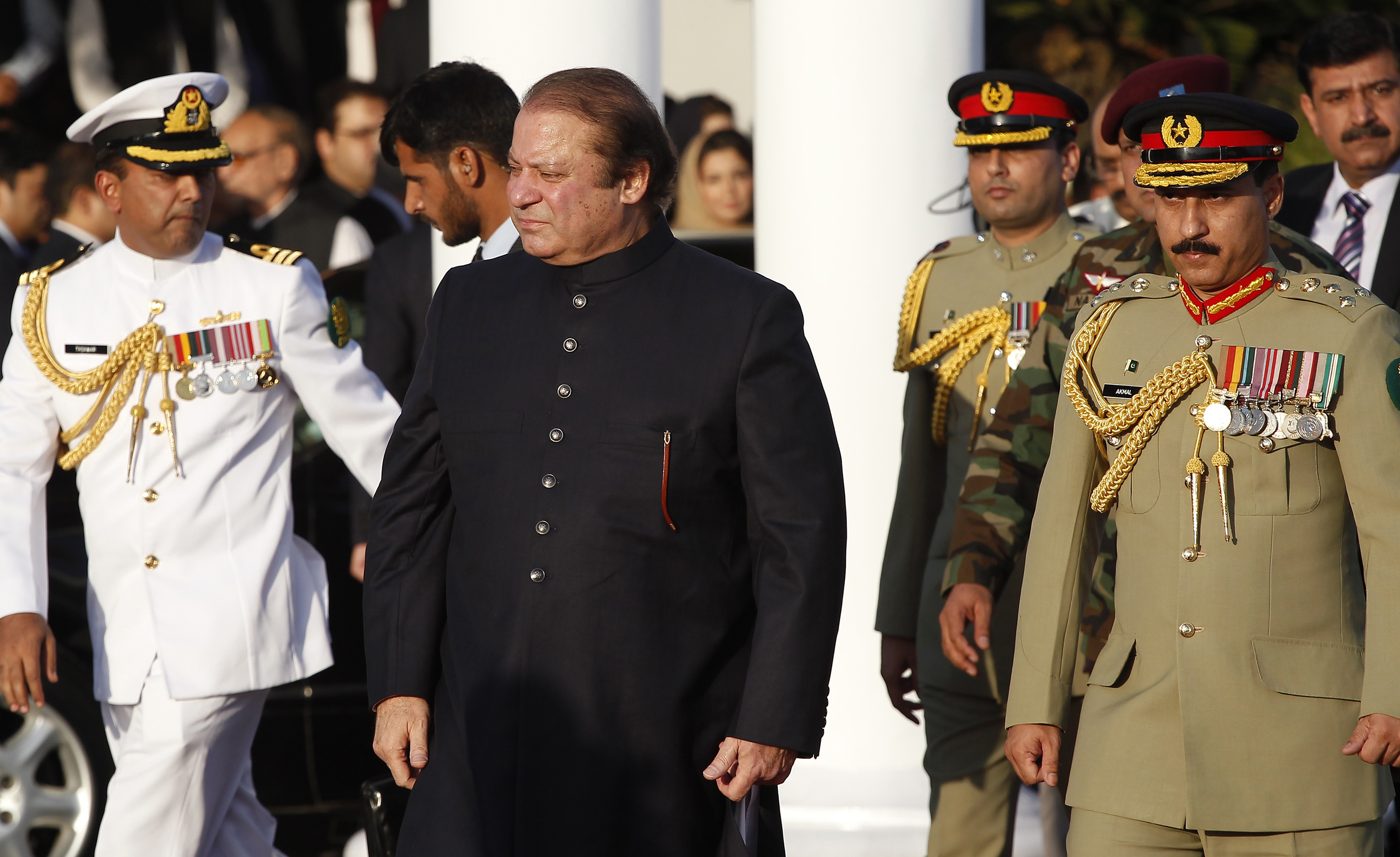 Pakistan, Taliban and the Afghan Quagmire

<p style="margin: 0in 0in 10pt;">Pakistan and its intelligence service have more influence over the Afghan Taliban than any other country or intelligence organization, writes Bruce Riedel. However, Pakistan's influence is not complete, and whether the country could persuade the Taliban to agree...

www.brookings.edu
24 Aug 2013 ~~ By Bruce Riedel
With American and NATO combat troops scheduled to depart Afghanistan next year, the relationship between the Afghan Taliban and Pakistan has become more important than ever. It is a complex and complicated nexus. Without doubt, Pakistan and its intelligence service, the Inter-Services Intelligence Directorate of the army (ISI), have more influence over the Taliban than any other country or intelligence service. It provides critical safe haven and sanctuary to the groups’ leadership, advice on military and diplomatic issues, and assistance with fund raising. But its influence is not complete, and whether it could persuade the Taliban to settle for a political settlement in Afghanistan, is unclear at best.
PAKISTAN’S SUPPORT FOR SURVIVAL AND REVIVAL OF THE TALIBAN
Pakistan has been intimately associated with the Taliban since its birth in the mid-1990s. The ISI provided support to Mullah Omar when he founded the organization in Kandahar. It had trained Omar even earlier in the 1980s at one of its training camps for the mujahedin that fought the Soviet occupation of the country. Pakistan was one of only three countries that recognized the Taliban’s Islamic Emirate of Afghanistan as the legitimate government of Afghanistan in the late 1990s (Saudi Arabia and the United Arab Emirates were the other two). By 2001, Pakistan was providing the Taliban regime in Kabul with hundreds of advisers and experts to run its tanks, aircraft and artillery, thousands of Pakistani Pashtuns to man its infantry and small units of its Special Services Group commandoes to help in combat with the Northern Alliance. Pakistan provided the oil needed to run the Taliban’s war machine. All of this despite a half dozen United Nations Security Council resolutions calling on all countries to cease aid to the Taliban because it was hosting al-Qaeda and Osama bin Laden. According to the 9/11 Commission, the ISI had mid-wifed the alliance between Mullah Omar and bin Laden, so it was no surprise that Pakistan ignored the UN.
~Snip~
Pakistan gave it (The Taliban) critical help and assistance. Without it, the Taliban would never have recovered. A NATO study published in 2012 based on the interrogations of 4000 captured Taliban, al-Qaeda and other fighters in Afghanistan in over 27,000 interrogations concluded that ISI support was critical to the survival and revival of the Taliban after 2001 just as it was critical to its conquest of Afghanistan in the 1990s. It provides sanctuary, training camps, expertise and help with fund raising. Pakistani officers have been killed on the battlefield in Afghanistan operating under cover with Taliban forces. The NATO report concluded “the ISI is thoroughly aware of Taliban activities and the whereabouts of all senior Taliban personnel.”
~Snip~
The Taliban’s Pakistani patrons, the army and the ISI were very pleased with the outcome. They control the lives of the leadership in Pakistan and the lives of the Taliban team in Doha. As the former head of Afghan intelligence, Amrullah Saleh, likes to point out that the Taliban negotiators fly home to Karachi from Doha whenever they want to see their boss or their families. They are not independent players.

Comment:
The deep involvement of Pakistan in creating the Taliban and their role in this latest disastrous debacle lies in the leadership of Pakistan and it's Intelligence force the ISI. Without the material support of Pakistan and Paki-Pashtuns the twenty year war could never have been achieved.
Even today as questions are being asked, our politicians and military have completely ignored this fact.
Mullah Omar, Bin Laden and key Taliban, Al Qaeda and ISI leaders all reside(d) in Pakistan.
Had any president from Bush '43' to Biden placed 'extreme' pressure upon the leadership of Pakistan and stopped this proxy war being fought by Pakistan again the coalitions forces things would have turned out differently.
One wonders whether the fact that Pakistan has nuclear weapons has anything to do with the reluctance for American leadership to stop the Pakistan gov't.
Where is, repeat, where is Joey Xi Bai Dung? "The World Wonders".​
OP 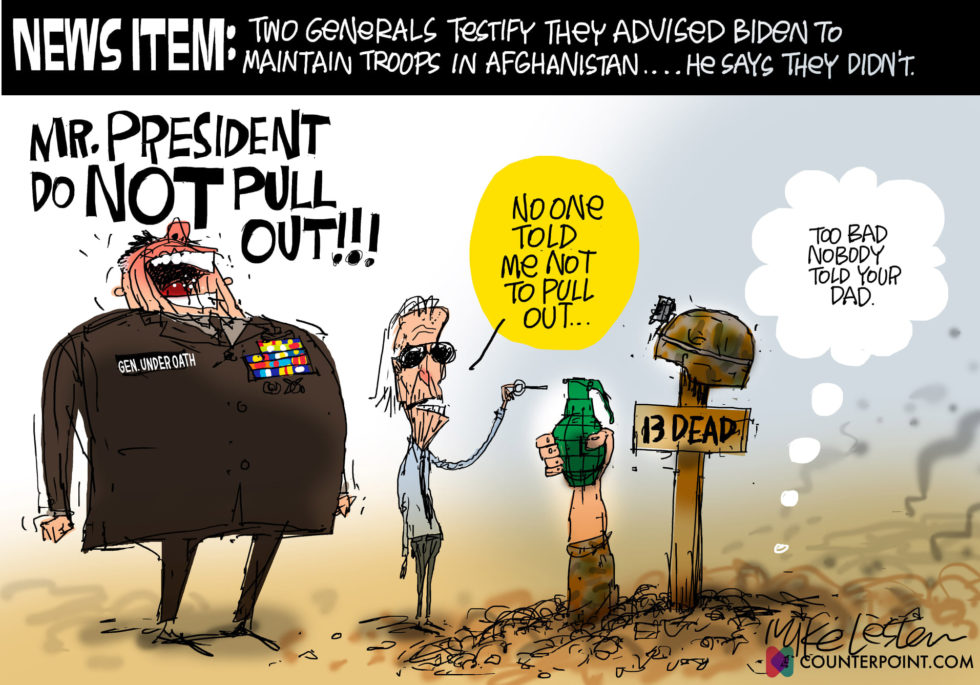 Where is, repeat, where is Joey Xi Bai Dung? "The World Wonders".​

Potatohead is a lying traitorous asshole.

Biden was correct to pull out

It saved American lives
.
The Jerk Store called….They are running out of YOU!
You must log in or register to reply here.

Sen. Menendez Threatens To Subpoena Defense Secretary Lloyd Austin Over His Refusal To Answer For Afghanistan

Gen. McKenzie Admits Taliban Offered US Control of Kabul During Withdrawal - But He Didn't Accept
2 3

JUST IN - Car plowed through the Christmas parade in Waukesha, Wisconsin. Multiple people on the ground injured
40 41 42

2 minutes ago
Grampa Murked U