I'm watching a documentary about kids with Cystic Fibrosis who are in Foster care.

This is my take on it.

1. The kid with Cystic Fibrosis Turns 18 and ages out of Foster care.

2. The kid is assigned a representative after age 18 because he can't take care of himself.

If the kid dies OF Cystic Fibrosis under 18, while in Foster care, and not under the representation and care of their parents....

The parents stay in prison for the rest of their natural lives, charged with negligent homicide, because it is presumable that the kid didn't get the care that he or she needed because of the parents putting the kid in Foster Care, in a situation where the care that the kid receives has its human limits.
W

Mom seeks medical expenses for child with cystic fibrosis
3 Feb.`16 — A jury in Montana heard opening arguments Wednesday in the case of a mother who is suing her health care providers because they failed to diagnose her unborn daughter's cystic fibrosis, denying her a chance to have an abortion.

Kerrie Evans of Gardiner is seeking nearly $14.5 million in damages from Park Clinic in Livingston, Billings Clinic's Bozeman OB/GYN, nurse practitioner Peggy Scanson and Dr. William Peters — including $10 million for her daughter's medical and psychological care. The girl, who's nearly 6, has a severe form of cystic fibrosis. The case lays bare an emerging medical ethics struggle. Lawsuits dealing with so-called wrongful births were recently before judges in Washington state and Oregon, while a dozen states prohibit such legal claims.

Jurors are being asked to determine whether Evans expressed concern about cystic fibrosis during her first prenatal visit, which she says she did. Attorneys for her medical providers said she spoke specifically about Down syndrome and did not participate in recommended genetic counseling. Evans sued in October 2011. Her attorney, E. Casey Magan, told jurors that a systemic failure led to the lack of diagnosis and the girl needing extensive and expensive medical care for the rest of her life.

Kerrie Evans of Gardiner, Mont., right, testifies in District Judge Mike Salvagni's courtroom on Wednesday, Feb. 3, 2016, during her negligent birth civil trial at the Gallatin County Law and Justice Center in Bozeman, Mont. Evans is suing her health care providers because they failed to diagnose her unborn daughter's cystic fibrosis, denying her a chance to have an abortion.​
Magan said Scanson, the nurse practitioner, did not offer Evans blood screening to determine if she was a carrier for the disease and the doctor did not ask whether she received genetic counseling. Evans also had difficulty contacting genetic counselors, the attorney said. "Your job is to fix, help and make up for this error," Magan said. In response, Park Clinic and Scanson said the mother only expressed concern about Down syndrome and did not request testing for cystic fibrosis.

It is an inherited disease in which the cells that produce mucus instead produce thick and sticky fluid that damages the lungs and digestive system. While each case is different, many patients now live to be adults with proper treatment and care. The doctor spoke with Evans about cystic fibrosis and other genetic issues because she had not gone through genetic counseling, said Lisa Speare, an attorney for Peters. She said he will testify that he explained the process and that she declined a blood test to determine if she was a carrier for the disease.

The regulator rejected the company's application for using the drug in cystic fibrosis patients aged 2 or older, who have one of 23 residual function mutations. The company's shares fell 7.7 pct to $9.60 in premarket trading.

Cystic fibrosis is caused by a defective gene that disrupts the function of the lungs and digestive system, producing a build-up of thick, sticky mucus leading to inflammation and recurrent bacterial infections. Half of the people with cystic fibrosis live longer than 28 years, according to the World Health Organization.(WHO | Genes and human disease)

Idiopathic pulmonary fibrosis (IPF) scars lung tissue, causing breathing to become progressively harder. It kills more than 5,000 people each year in the UK alone, according to the British Lung Foundation. Researchers hope a new drug, inspired by an antibody in the blood of sharks, can begin human trials next year. The drug, AD-114, was developed by researchers at Melbourne's La Trobe University and biotechnology company AdAlta.

Initial testing successfully targeted fibrosis-causing cells by creating a human protein that imitated the shark's antibody, according to Dr Mick Foley, from the La Trobe Institute for Molecular Science. "Fibrosis is the end result of a lot of different insults and injuries," he told the BBC. "This molecule can kill the cells that cause fibrosis."

IPF symptoms include shortness of breath, especially during exercise, which gradually gets worse, and a persistent dry cough. There is currently no cure so treatment focuses on trying to relieve symptoms and slow its progression. The US Food and Drug Administration this month designated AD-114 an "orphan drug" - a move which gives tax breaks to companies attempting to find treatments for diseases. 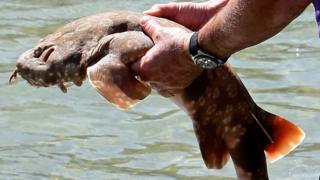 A wobbegong shark​
Dr Foley, who is also AdAlta's chief scientific officer, said the company had raised A$10 million (£6m; $7.5m) since being listed on the Australian Stock Exchange in August. It intends to use the money to take the drug to human trials in 2018. AD-114 does not involve injecting shark blood, which the human body would reject, Dr Foley said.

In laboratory tests, the drug also showed potential to treat other forms of fibrosis. This included, for example, people suffering from liver disease and age-related eyesight degeneration, Dr Foley said. He added no sharks had been harmed in the process. A single blood sample was extracted from a wobbegong shark at Melbourne Aquarium, ."It would be very nice to say one day that 'this person is alive because of what the sharks told us,'" Dr Foley said.

i have questions.....are these her stem cells or what? how do you get a 'dose of stem cells'

and why would it just target the lungs would they not spread all over the body....i am sorry i just dont know a lot of this stuff....good article

strollingbones said:
i have questions.....are these her stem cells or what? how do you get a 'dose of stem cells'

and why would it just target the lungs would they not spread all over the body....i am sorry i just dont know a lot of this stuff....good article
Click to expand...

A cousin and her husband have worked with CF patients for years.
I will see what I can find out for you.

I used to know a kid who had CF. He used to drink, smoke cigarettes and smoke weed.
W

Thanks Uncle Ferd. Hope you are doing well.

strollingbones said:
i have questions.....are these her stem cells or what? how do you get a 'dose of stem cells'

and why would it just target the lungs would they not spread all over the body....i am sorry i just dont know a lot of this stuff....good article
Click to expand...

In layman terms, this is essentially what happens.
The patient follows a protocol.
Testing of lung function is done before the infusion of the stem cells.
The stem cells are from bone marrow and have no identifying 'features' to necessarily target a particular organ.
The patient receives the stem cells directly into the bloodstream.
After a period of time, the patients lung function is tested again.
I believe there are 3 patients in the initial protocol.
If there are signs of improvement, another set of patients will receive a higher dose of stem cells and testing progresses until it is deemed successful enough to continue treatment and further testing.
I understand there has been some success in Canada with regards to MS and stem cell research on that particular disease.

When my cousin first became involved with this research, many patients didn't live into early adulthood.
Now some have married and even have had children.
You must log in or register to reply here.

A moment ago
TransLivesMatter

R
The First Amendment is useless.
2 3