AMart said:
Yes it is legit.
Click to expand...

It's medical and pseudo-religious quackery.

toobfreak said:
Really? Who says. And how do you explain multiple personalities and possessions
Click to expand...

Catholic “charities” run mental hospitals, psychiatric wards, and private insane asylums where they administer mind-altering drugs against their victims' will among other abominations.

It's 100% Catholic, unless you count the pre-Christian Roman Pagan religion today popularized with astrology and horoscopes in the daily newspapers.

The Irish Ram said:
Matthew 6:7
But when ye pray, use not vain repetitions
Click to expand...

An “Ave Maria” to an icon or idol on the shelf is awfully vain repetition, or occult incantation, as if one were to assume the power to cast out one demon by calling on another.
O

.oldschool said:
No Mortimer, the body can only house one spirit.
Click to expand...

Really? Who says. And how do you explain multiple personalities and possessions?
Click to expand...

Eastern mystics.
Psychiatry can explain these medical conditions.
Not everyone in the world is a literalist Christian.
Click to expand...

A witch doctor in Borneo can explain the Sun and the Moon.

Psychiatry: the most inexact of the "sciences."
Click to expand...

There is one body, and one Spirit, even as ye are called in one hope of your calling; One Lord, one faith, one baptism, One God and Father of all, who is above all, and through all, and in you all.

Mortimer said:
Or dangerous and do other christian denominations have it too or even other world religions or just Catholics? 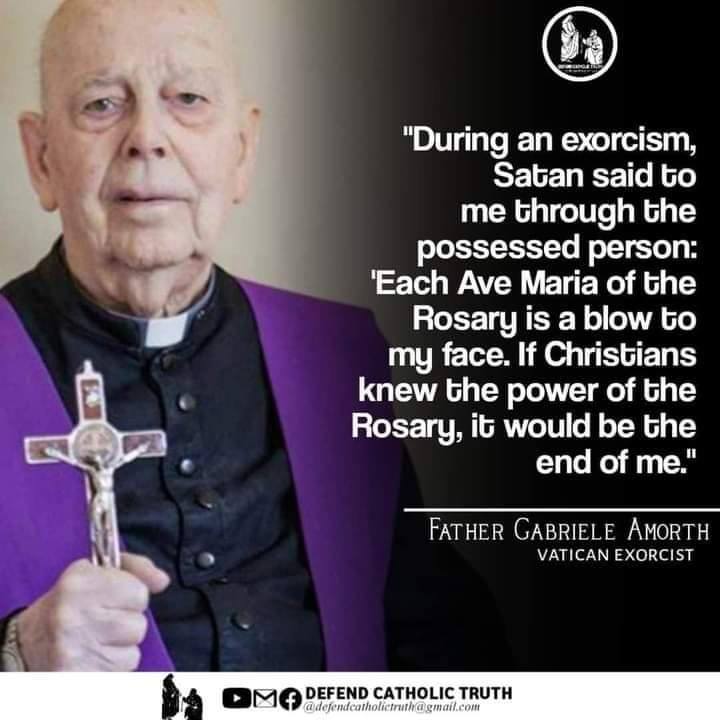 According to Scripture, Jesus defeated Satan.

According to the Vatican, Satan is not defeated? And the Rosary - not Jesus - is what would defeat him?

The Irish Ram said:
Christ called demons out, so we know they are there. Finding someone actually qualified to expel one is another story.
But, here is what you should have gleaned from the picture you posted:
Notice who the priest gave the glory to. Not Christ, but a Catholic concoction.
That priest just lied to you. Beads on a string have no power. Zero. Satan knows that. Beads don't scare Satan one bit.
And, repeating a group of words over and over is called praying in rote and it is worthless,
God doesn't want to hear what someone else says. He wants to here from you.

Matthew 6:7
But when ye pray, use not vain repetitions
Click to expand...

I know that you are wrong, but it takes time to explain it to you. I know that because I read some catholic stuff, and I know it is also founded in the Bible and not wrong. But I respect you IrishRam, you know you are a good person to me. So lets just agree to disagree.
Click to expand...

We are confident, yes, well pleased rather to be absent from the body and to be present with the Lord
Click to expand...

.
No layovers, straight up.

On demonic possession, and this is important:
When a spirit is forced out of a body, it creates a void. If the void remains, the demonic spirit will just move right back in, with some of his friends. It is imperative that the person fill that void with the Holy Spirit. That Spirit is the equivalent of a "No Vacancy" sign.

Matthew: 43-45 “When an impure spirit comes out of a person, it goes through arid places seeking rest and does not find it. Then it says, ‘I will return to the house I left.’ When it arrives, it finds the house unoccupied, swept clean and put in order. Then it goes and takes with it seven other spirits more wicked than itself, and they go in and live there. And the final condition of that person is worse than the first.
Click to expand...

Nothing about magic beads anywhere in that scripture. Accept the Holy Spirit and demons flee. When light shows up, darkness flees. The proof is in something as simple as a light switch...

I love my Muslim neighbor!

A moment ago
Thoth001

No one should have Comcast Cable in 2021