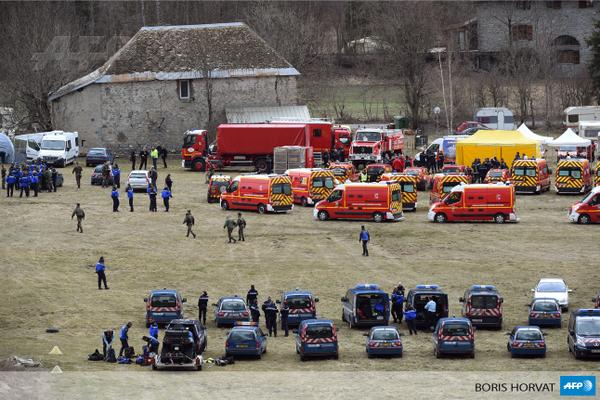 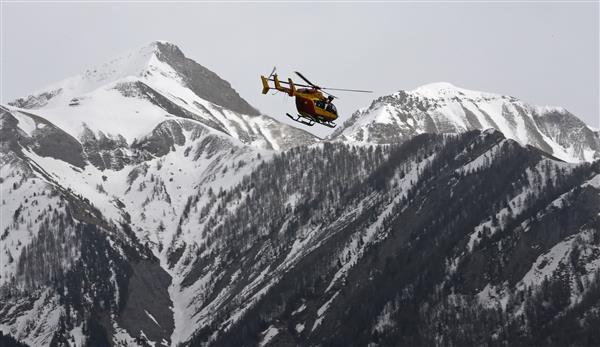 All 150 people aboard a Barcelona-to-Dusseldorf flight were presumed dead Tuesday after their plane crashed in a remote section of the French Alps following an eight-minute nosedive, officials said.

The Airbus A320, with two babies among its 144 passengers, made an agonizing descent while flying over France before losing contact with authorities at 10:53 a.m.

“That was when the accident happened, when the crash happened,” said Oliver Wagner, CEO of Germanwings, the budget airline of Lufthansa.

A local politician, Gilbert Sauvan, told the Les Echos newspaper there was nothing left of the 123-foot-long, 150-seat aircraft.

Plane crashed in French Alps. 150 people have perished. Prayers for the family and loved ones of these passengers. Terrible news.
OP

The weather in the area deteriorated Tuesday afternoon, with a chilly rain falling.

"The largest debris is the size of a car," he added.

The Germanwings Airbus 320 from Barcelona to Duesseldorf, Germany, came down in the mountains on Tuesday morning after an eight-minute descent from its cruising height. Officials said they are still establishing whether there was a distress call.

The boss of airline Germanwings says the plane went into a long descent before it crashed into the French Alps, likely killing all 150 people on board.

He said the pilot had more than 10 years' experience working for Germanwings and its parent airline Lufthansa. Airbus said the A320 was delivered to Lufthansa in 1991.

Germanwings said the passenger manifest included two babies. Officials believe there were 67 German nationals on board.

Officials at two airports are rushing to provide help and information to relatives and friends of the passengers aboard the crashed Germanwings flight 9525.

In Barcelona, from where the plane took off Tuesday morning, police escorted people, some of them crying, through a terminal and took them to a secure part of the airport. They did not speak to the media, and one woman held a jacket over the head of a sobbing woman.

In Duesseldorf, the destination airport, family members arriving at the airport were taken from the main terminal to a nearby building. Airport employees partly covered the building with sheets to keep the relatives out of the eye of the public.

A total of 150 people were on board the plane when it crashed in the French Alps. No survivors are expected to be found.

German Chancellor Angela Merkel says she will head to the remote mountain in the French Alps where a Germanwings passenger plane crashed with 150 people aboard.

She says her thoughts are "with those people who so suddenly lost their lives, among them many compatriots."

Merkel says she will travel to the region on Wednesday, a day after her foreign and transport ministers were heading to the crash site.

She is urging people not to speculate on the cause of the crash until an investigation can be conducted.

No survivors are expected in the crash of the plane, which was traveling Tuesday morning from Barcelona, Spain, to Duesseldorf, Germany.

They say this is the worst crash in at least 3 decades. No rescue crews are being dispatched. They said everyone is dead. RIP - very tragic story. My sympathy and prayers to the families of these victims. Truly heartbreaking. Two infants on the plane also perished. Very, very sad news.
OP

Photo of mourning family. We need to keep these people in our prayers. This is really heartbreaking. Imagine this news coming to you about your own family member - how broken hearted you would be! The Lord is near unto them of a broken heart...... Psalm 34:18

Fox News is reporting Obama was at fault. More at 11.
OP

I am pretty sure Stat started a thread on this before I started this one. They should merge the threads. It is a terrible tragedy. Those people are gone tonight. Their families are left with nothing but memories of them. I am very sorry for the families and loved ones of these passengers that lost their lives today. There are no guarantees for tomorrow. Today is the day of Salvation. Are you saved, JFK? Make sure you are saved and living for Jesus - be prepared to see him at all times. Amen? Good night.
You must log in or register to reply here.

Sons of the Confederates demand their racist flag on license plates

Only 6 days left, here is where Trump stands in the race:

Jon Stewart is back! He will host a new current affairs series for Apple TV

It Was Always A Two Prong Attack