WHERE IS MH370 ?
MH370 For Chinese Families Fading Hope and Little Help
I wonder if they had a finders fee for finding it the sea there would be crawling with treasure hunters?

they are safe and living on Saturn with the aliens that abducted them....
OP

omg. If that is true who's next?

I believe Putin knows where it is being stored.
K

Is this the one that disappeared today?
W

The fragment, said to be the inboard section of the right, outboard flap of the plane, was recovered in June. MH370, flying from Kuala Lumpur to Beijing, had 239 people on board when it vanished in March 2014. The Boeing 777 is presumed to have crashed into the southern Indian Ocean after veering off course. The piece is now being examined for any evidence that may indicate how the flap was operating at the time of separation from the wing, the Australian Transport Safety Bureau said in a report. 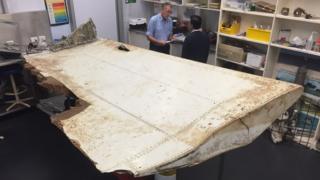 Airplane debris found off the coast of Tanzania found in June 2016​
This could help throw light on whether the plane was being flown when it came down in the sea. The part numbers and a date stamp on the piece, recovered on Pemba island, helped the investigation. In addition to the Boeing part number, the report said, the identification stamps had an "OL" number, both unique identifiers to part construction. The Italian part manufacturer then recovered build records for those numbers, confirming that they belonged to the missing plane.

Very slowly, the clues are piling up. All these pieces that keep washing ashore could eventually help to build a picture of the plane's final moments. Scroll down the Australian investigators' report and you find this, important paragraph: "At the time of writing, the flap section was being examined for any evidence of interaction with mechanisms, supports and surrounding components (such as the flaperon, which abuts the inboard end of the outboard flap) that may indicate the state of flap operation at the time of separation from the wing." In plain English, it means that this piece MIGHT just help them work out if the flaps were extended when the plane hit the water. If they were, it COULD indicate that the aircraft was being flown by someone at the end. Flaps never extend automatically. So that starts to suggest a deliberate act. Equally, if the flaps weren't extended, it points more to an accident. To be clear though, none of this will give anything close to definitive answer. It's just a little clue as to what happened.

A number of other pieces of debris, some confirmed to have come from MH370, have been found in recent months off the coast of neighbouring Mozambique and Madagascar. They include a section of the wing called a flaperon, found on Reunion Island, and a horizontal stabilizer from the tail section and a stabilizer panel with a "No Step" stencil discovered in Mozambique. All the debris are believed to have been driven westwards from the presumed crash site on ocean currents. Australia has been leading the search for the missing aircraft, using underwater drones and sonar equipment deployed from specialist ships. The search, also involving Malaysia and China, has led to more than 105,000 sq km (40,500 sq miles) of the 120,000 sq km search zone being scoured so far. But countries have agreed that in the absence of "credible new information" the search is expected to end later this year.

A post like this is a target for smarmy elitist left wingers who pretend to care about suffering but are merely political opportunists. Look at the posts. It's amazing that the globe is ringed with satellites that search for anomalies in the Arabian desert and track your teenager in your car with a GPS chip but they couldn't find a freaking 747 in the sky or after it crashed. Something ain't right and the Chinese families have a legitimate gripe.

Yeah the debris is easy to distribute if you pull it off and smash it up a bit. The plane is in the Twilight Zone with Rod Serling. I guess you don't know about misdirection, and fake offs. Like being in a sub, (not a sandwich) and blowing some debris and oil out a tube to make it look like you are destroyed, or a plane dropping some spare parts to make it look like it went down, or >>>>>>>> a politician trying to make it look like they have always had the peoples interest at heart while they committed numerous miscreant acts.
OP

Perhaps a convoy of ocean drones with the latest radar detection controlled by a ship could help map out the ocean and find the airliner. Not sure on how to power a fleet of ocean drones tho.
You must log in or register to reply here.

Russia was invaded by one MILLION Ukrainian men of military age, hiding from Poroshenko - official d

Spokesman For Ferguson Brown Case Referred To Michael As "A Child" On The Kelly File.

Trump Has Not Expanded His Base
2 3

Michael Skakel, a cousin of the Kennedys, won’t be retried in 1975 death of Martha Moxley, effectively ending case that filled tabloids for decades!