What happens if Biden resigns? 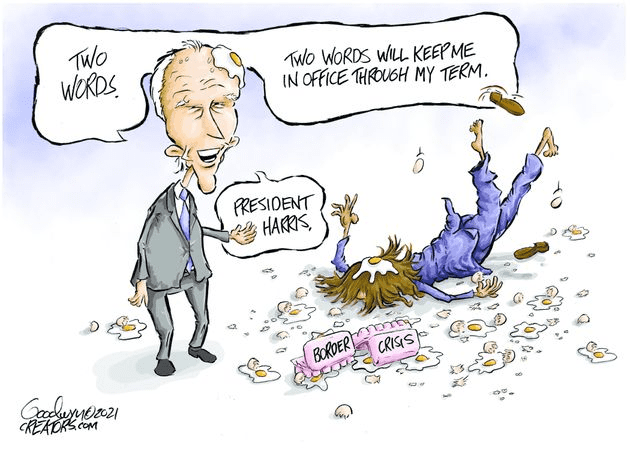 Yes, it means to cast a vote to break a tie among the voting Senators.

Faun said:
Yes, it means to cast a vote to break a tie among the voting Senators.
Click to expand...

But you're talking about someone who is a Senator, who has already voted and whose vote is part of the tie to be broken, now being allowed to vote to break that tie. No matter how you try to spin it, this would mean that he gets two votes, not just one as every other Senator gets.

We can be Godless and free. • “Social justice” through forced redistribution of wealth. • Silencing religious opinions counts as “diversity”. • Freedom without moral and personal responsibility. • Civilization can survive the intentional undermining of the family.​
S

Faun said:
Yes, it means to cast a vote to break a tie among the voting Senators.
Click to expand...

so how does he get to do that if there are only 100 senators?

struth said:
so how does he get to do that if there are only 100 senators?
Click to expand...

If one or more Senators don't vote and the vote ends in a tie. This really isn't rocket science. It shouldn't be such a struggle for you.

Faun said:
If one or more Senators don't vote and the vote ends in a tie. This really isn't rocket science. It shouldn't be such a struggle for you.
Click to expand...

so any Senator could break that sort of tie

task0778 said:
We didn't elect Joe Biden so that someone else could pull the strings behind the curtain. He is supposed to be the CEO, the decision-maker, not someone else. He was not elected to be a figurehead, or a guy that sleeps all day until it's time to make an appearance. We elected him to do the fucking job, and right now he ain't doing so good at it. You say the job is being done, but not everybody would agree with that. He's supposed to be out there leading the way but instead he's hiding away somewhere.

Obviously it does not matter to you, but it does to a lot of other people. You would've elected a dead dog to get rid of Trump. And actually you came about as close as you can get.
Click to expand...

You're right. "We didn't elect Joe Biden". About sums it up.

The system elected Biden, and Trump and all the others.

Put a different system in place and you wouldn't be getting all these crazies. Dubya, Trump and now Biden. What a laughing stock.

As far as I can tell, people choose their president based on nonsense. Most people seem unable to understand politics, so they end up electing people who manipulate the hell out of them.

Yes, it matters to a lot of people. They THINK it matters. But they're ignorant.
"These are my principles. If you don’t like them I have others." Groucho Marx and partisan hacks all over America.

Lots of convicted Trumpinista haven't voted legally in decades.
It is a shame that our browsers do spell check but can't do stupid check before that final click.
N

Moonglow said:
He is in cognitive decline just like the last dotard in chief we need better leadership than this.
Click to expand...

Nobody older than 60 should ever be able to run for President. We need a sharp intellectual leader not a cognitively compromised one. very few 60 year old people have serious cognitive issues. Term limits for Congress and Senate as well as published Cognitive tests for all future Congressmen Senators and Presidential Candidates... start now many couldn't pass already. to many Geriatrics in our Govt.
P

Lesh said:
Biden is not going to resign and there is no reason for him to.

Should that unlikely possibility occur Harris would become President and a new VP would be selected...as was done with Nixon.
Click to expand...

The Democrats don't have the votes to confirm a new VP.

And there is no chance the Republicans will confirm a Democrat VP and forfeit control of the Senate to the D's.

task0778 said:
There are 3 ways that I know of to remove a sitting president:

1. Impeachment in the House and a conviction in the senate by a 2/3 vote for removal from office. Let's be honest, that ain't going to happen.

2. 25th Amendment. The Congress has to pass this through both chambers. That ain't going to happen either. Here's the problem for the democrats: once they do that, Kamala becomes the prez and there is no VP, which means they don't have the tie-breaker in any vote that goes 50-50. Kamala would have to nominate somebody, and the House and Senate would have to confirm that by a majority vote, which means 51-49 or better. IOW, a Repub would have to vote for Kamala's nominee, and that is a big deal because 50-50 doesn't cut it. So, without at least one Repub on their side, the Dems can't do shit in the Senate cuz they don't have the tie-breaking vote (no VP).

3. Biden can just resign, no impeachment and no 25th Amendment action. Same deal, as I understand it. When Nixon resigned, he nominated Gerald R. Ford to be his VP, and that nomination was confirmed by the House and the Senate by a wide majority. Would the Senate give up their power to block all democratic legislation without some bipartisan action? Doubtful.

Why Joe Biden can't resign, or be removed — or die

See also: Can the Biden presidency last much longer? In the wake of the Afghanistan debacle, demands have arisen in Congress for President Biden to resign or to be removed via the 25th Amendment. Elements of the formerly ...


So, will Joe step aside, or be forced to step aside? I don't think so, the democrats need Kamala Harris as the VP to cast tie-breaking votes in the Senate so they can pass stuff and confirm Supreme Court Justices. Clearly he is not up to the job; everybody knew it before the election, most of the time he couldn't even get out to campaign. And now we see that most of the time he isn't able to perform the duties of the presidency.
Click to expand...

Ford was already VP after Agnew resigned.
"All battles are fought by scared men who'd rather be someplace else."

task0778 said:
If Harris becomes president then the VP office is vacant, and that means the democrats in the Senate do not have the tie-breaking vote, and that includes the vote to confirm the next VP no matter who it is. Without GOP support, everything the democrats want to do is dead. I think that means we are better off with Harris rather than Biden.
Click to expand...

There is no "vote to confirm". If Biden resigns, Harris is President.
"All battles are fought by scared men who'd rather be someplace else."

Polishprince said:
The Democrats don't have the votes to confirm a new VP.

And there is no chance the Republicans will confirm a Democrat VP and forfeit control of the Senate to the D's.
Click to expand...

There is no vote to confirm. The VP becomes President. That's why we have an election.
"All battles are fought by scared men who'd rather be someplace else."

RoshawnMarkwees said:
But someone had to assume the role in the interim.
Click to expand...

Nope.
"All battles are fought by scared men who'd rather be someplace else."
M

Moonglow said:
I doubt anything happens to old Joe, you are fantasizing big time..
Click to expand...

Nobody asked your opinion.

Read the question and answer or STFU

Polishprince said:
Not at all. No one served as VP from November 1963 through January 1965 after JFK passed away.

That was before the the 25th Amendment.
"All battles are fought by scared men who'd rather be someplace else."

Nope.
"All battles are fought by scared men who'd rather be someplace else."
C

Admiral Rockwell Tory
You are right. If Bidumb leaves then Harris is POTUS. She will choose her VP. Pelousy has nothing to do with it.

The Irish Ram said:
There is no way the Senate will put Harris in the driver's seat. The cure would be worse than the problem. We have to hope the danger Obiden is putting Americans in, here and abroad, can be mitigated until we can get him out. Taking back the House will cripple him.
Click to expand...

This was clearly wishful thinking. 13 dead soldiers now.
I don't always blast Band Maid on my home theater but when I do my neighbors learn Japanese.

Claudette said:
Admiral Rockwell Tory
You are right. If Bidumb leaves then Harris is POTUS. She will choose her VP. Pelousy has nothing to do with it.
Click to expand...

Your ignorance knows no boundaries. Yes, Pelosi has something to do with it. She and the House she leads vote on confirmation.

August 20, 2021 Day 5 of America held hostage by Taliban in Afghanistan

Why Should Anything About Afghanistan President Biden Says Now?

T
Haley, Blackburn, other Republicans call for Biden's resignation or impeachment after attack at Kabul airport
2

Alex Jones: "I declare war on Donald Trump" over silence on Epstein

I do not know in which section to put this

Are serfs and slaves the same?
2