Trump Tells Aides He Has Decided to Remove Stephen Bannon
President Trump has told senior aides that he has decided to remove Stephen K. Bannon, the embattled White House chief strategist who helped Mr. Trump win the 2016 election, according to two administration officials briefed on the discussion. 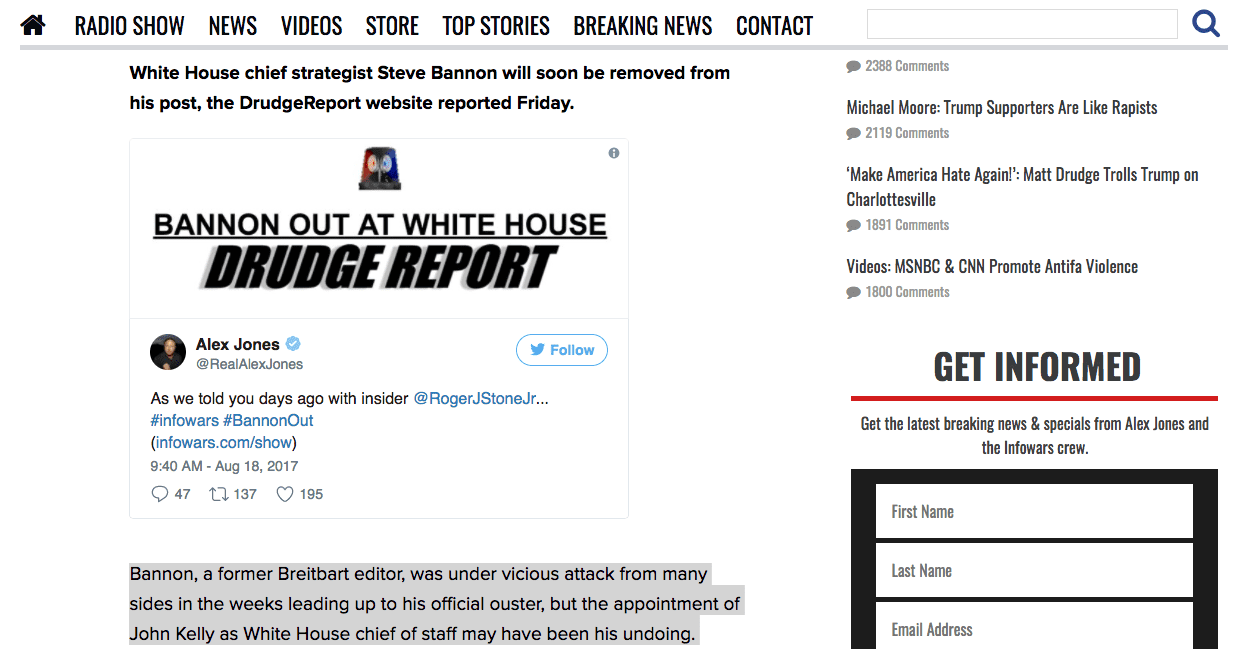 Yep, just heard it on the msm.
OP

Yeah inforwars said this was going to happen.
T

Top Trump Adviser Steve Bannon Out From White House
He was a conservative force in the West Wing credited with helping to shape Trump’s populist appeal.

Why is it, every time Trump fucks up, everybody but Trump is throw under the bus?

tigerred59 said:
Top Trump Adviser Steve Bannon Out From White House
He was a conservative force in the West Wing credited with helping to shape Trump’s populist appeal.

Why is it, every time Trump fucks up, everybody but Trump is throw under the bus?
Click to expand...

Shitheads one and all:

EXCLUSIVE: Former Trump Adviser Says He Will ‘Blow’ McMaster, Drudge ‘The F**k Out’ If Bannon Is Ousted
T

Dear Bannon.......please please after emerging from that bus....get with all of the above and write a tell all!!

This is what I don't understand, Donald Trump has single handily ruined the integrity and character of every single person that has worked for him...literally forced these people to lie with him and for him and the minute the shit hits the fan, the minute his lies are exposed, this man toss these people aside as though they were used toilet paper...in essence he shits all over these people then throw them away. Although Bannon did control Trump, its still that fool that tweets lies on a daily basis.....anybody that works with Trump, for Trump is subject to complete and utter humiliation and scorn...what a sad way to serve the country.....just sad.
You must log in or register to reply here.

Bannon: 'The Trump Presidency That We Fought For, Is Over.' WHEEE!

Unethical hiring in the White House

There Is Still Money to Be Made in Trumpery!
2

Biden Administration to Review Thousands of Deportations That Occurred Under Trump, Wants to Bring Them Back

DeSantis Publicly Takes President To The Woodshed: 'Until You Secure The Border & Stop Importing COVID-19 I Don't Want To Hear Anything From You!'
10 11 12