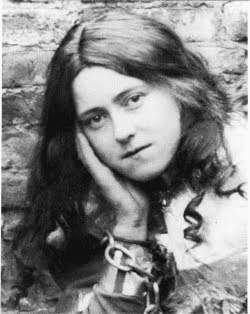 I've been reading "Story of a Soul", an autobiography written by Carmelite nun St. Therese Lisieux in 1895 at the behest of her Mother Superior. She died a painful deal at age 24 of tuberculosis in 1897 after a near-perfect life of prayer, sacrifice, and charity towards others. Therese at age14 was determined to enter the Convent by age 15 when the usual minimum age was 21. When her local bishop wavered, the headstrong French girl went on a pilgrimage to Rome and dared speak out during an audience with Pope Leo XIII where she implored him to allow her join the nunnery at Lisieux, angering the attending bishops. The pope was so taken with her resolve and audacity, she was admitted the next spring.

Therese's model was simplicity. The more simple one's life, the nearer to perfection it became. The writings of this young woman and her virtue were so profound, and of such a doctrinal contribution to the Church, she was canonized a Saint in 1923 and named one of only four female Doctors of the Church. Pope St. Pius X called her the greatest modern Saint. Saint Pope John Paul II considered her one of the greatest saints of all time.

1. If I did not simply live from one moment to another, it would be impossible for me to be patient; but I only look at the present, I forget the past, and I take good care not to forestall the future.
2. True charity consists in bearing all our neighbor’s defects – not being surprised at their weakness, but edified at their smallest virtues.
3. The guest of our soul knows our misery; He comes to find an empty tent within us – that is all He asks.
4. The closer one approaches to God, the more simpler he becomes.
5. True happiness on earth consists in being forgotten and in remaining completely ignorant of created things. I understood that all we accomplish, however brilliant, is worth nothing without love.
6. I learned from experience that joy does not reside in the things about us, but in the very depths of the soul, that one can have it in the gloom of a dungeon as well as in the palace of a king.
7. When I die, I will send down a shower of roses from the heavens, I will spend my heaven by doing good on earth.
8. Holiness consists simply in doing God’s will, and being just what God wants us to be.
9. The good God does not need years to accomplish His work of love in a soul; one ray from His Heart can, in an instant, make His flower bloom for eternity.
10. It pleases Him to create great Saints, who may be compared with the lilies or the rose; but He has also created little ones, who must be content to be daisies or violets, nestling at His feet to delight His eyes when He should choose to look at them. The happier they are to be as He wills, the more perfect they are.
11. Our Lord’s love shines out just as much through a little soul who yields completely to His Grace as it does through the greatest.
12. Jesus has chosen to show me the only way which leads to the Divine Furnace of love; it is the way of childlike self-surrender, the way of a child who sleeps, afraid of nothing, in its father’s arms.
13. A soul in a state of grace has nothing to fear of demons who are cowards.
14. Jesus, help me to simplify my life by learning what you want me to be and becoming that person.
15. I have often heard it said in retreats and elsewhere that an innocent soul never loves God as much as a repentant one, and how I long to prove that is not true.
16. Without love, deeds, even the most brilliant, count as nothing.
17. The loveliest masterpiece of the heart of God is the heart of a mother.
18. For me, prayer is a surge of the heart; it is a simple look turned toward heaven, it is a cry of recognition and of love, embracing both trial and joy.
19. At first sight, it appears easy to do good to souls, to make them love God more, and mould them according to one’s own ideas; but in practice one finds that one can no more do good to souls without God’s help than make the sun shine in the night.

20. Miss no single opportunity of making some small sacrifice, here by a smiling look, there by a kindly word; always doing the smallest right and doing it all for love.
21. A word or a smile is often enough to put fresh life in a despondent soul.
22. Remember that nothing is small in the eyes of God. Do all that you do with love.
23. My whole strength lies in prayer and sacrifice; these are my invincible arms; they can move hearts far better than words.
24. Sufferings gladly borne for others convert more people than sermons.
25. As Jesus had made me realize that the Cross was the means by which He would give me souls, the more often it came my way, the more suffering attracted me.
26. For a long time now I have not belonged to myself; I have given myself entirely to Jesus. He is free to do with me whatever He likes.
27. True love feeds on sacrifice and becomes more pure and strong the more our natural satisfaction is denied.

28. I can nourish myself on nothing but truth.
29. Only God can see what is in the bottom of our hearts; we are half-blind.
30. Our Lord poured in the light of truth, which shines far brighter than the shadowy light of earthly pleasures. I would not exchange the ten minutes spent upon my act of charity for a thousand years of such worldly delights.

TheReaper said:
St. Therese, pray for us
Click to expand...

At last, a comment on this iconic girl. She is one of the most incredible people in history. I thought more in here would have something to say.

Mashmont said:
At last, a comment on this iconic girl. She is one of the most incredible people in history. I thought more in here would have something to say.
Click to expand...

I have a gut feeling you will not find people here who understand intercessory prayer of the saints.
Democrats are the party of Socialism, Sodomy and Groomers.
Democrats are the enemy of Liberty and Freedom
You must log in or register to reply here.

Are There Prophets Around Today?

Family Values is Really Going to be Upended

N
Zone1 Christ did too establish an organization, aka: a CHURCH (with buildings!)
2