‘Impeachable whatever’: GOP floats impeaching Biden for ... something

Not assault. Harassment. Get your facts straight.

During questioning under oath about the allegation, Clinton denied having sex with Lewinsky.

That is what he was impeached over. Get your facts straight.

Perjury. Bill is a sleazeball.

Clinton was impeached for obstruction of justice, not for lying about a blow job. Idiot.
"Principle is OK up to a certain point, but principle doesn't do any good if you lose."
Dick Cheney

These issues have been cobbled up by the media. There is no way in hell that republicans would deal with impeachment this close to the mid terms. It's another fear tactic created by MSN to generate interest among lethargic democrats.

No, I know it makes sense,
5. No election contest in American history has had 923 citizens stake their personal freedom on sworn testimony to attest to irregularities and legal issues.

There are tons of impeachable issues but the big floater is MSM that presumes a minority party is willing to go down the path of impeachment before the mid terms. It's a crazy theory if you pay attention to politics.

C_Clayton_Jones said:
“Republicans have been cuing up a potential impeachment of President Biden if they take back control of Congress in the midterm elections.

Now they just need to figure out what they might actually impeach him for
Click to expand...

1. Illegal Immigration:
Violations of both Constitution and Law in execution of an Open Border policy that has allowed a record 2 MILLION illegals intothe US
- Illegal trafficking of illegals: Trafficking / moving illegals across state lines
- Using tax dollars to intentionally 1) violate the Constitution, 2) violate US law, 3) endanger National Security

2. Illegally Enriching His Family
- Perjury
- Conflict of Intetest - Using his VP office to host / meet Huntet Biden associates / partners while lying about never meeting them
- Crimes proven on Hunter's laptop and through testimony under oath by Hunter Biden associates, etc...

Joe Biden also breached the Foreign Corruption Practices Act confirmed:” The Foreign Corrupt Practices Act of 1977 is a United States federal law that prohibits U.S. citizens and entities from bribing foreign government officials to benefit their business interests. The FCPA is applicable worldwide and extends specifically to publicly traded companies and their personnel, including officers, directors, employees, shareholders, and agents.”. Joe Biden received bribery from China for a long time, so he should face at least 5 years in prison.

3. Illegal Execitive Orfer Requiring Federal Workers to Wear Masks
- 21 U.S.C. §360bbb–3(e)(1)(A)(ii)(III)) makes it clear that masks are EXPERIMENTAL EQUIPMENT and the Presidrnt can NOT legally mandate the wearing masks, nor does he have the authority to punish those who do mot do so by firing them / punishing them. BIDEN BROKE FEDERAL LAW.

4. Violation of Separation Of Powers
- The head of the Executive Branch publicly declared he wanted to see a 'Guilty' verdict in the Chauvin trial, crossing into rhe Judicial Branch's realm. The jury was not sequestered, and his comments were reportedly heard by the jury, thereby tainting the jury. This was MISCONDUCT at the least.

6. Extortion :
Biden is on videotape bragging about how he extorted the former PM.of Ukraine.

'When the “CDC” extended its illegal and unconstitutional eviction moratorium, Biden did just that.

He had one legal scholar tell him to do it and dozens tell him it was unconstitutional, including the Supreme Court which let the rule stay in place until July 31 but no longer.

This is a clear, unequivocal violation of his oath and according to how the founding generation arguing during ratification a clearly impeachable offense."

This was willful illegal conduct from the man whose first job is to defend the document.

8. Attempt to use his administration and federal judicial agencies to illegally brand / designate American citizens 'Domestic Terrorists' abd threats without due process... endangering National Security and creating dangerous division by declaring half of US citizens to be threats to the country and asking liberals / Democrats to 'fight back' against them - resulting in violence, liberal extremist domestic terrorist bombings, and murder (liberal ran over and killed teen based on teen's Conservative beliefs / politics)


There is more, but let's not forget the justified removal of Biden.based on proven / admitted drmentia / mental instability.
- More than enough video of his own actions exists, testimony from previous WH physicians, reported admission that Biden was given a lot of drugs to.improve Biden's temporary mental state for short periods of time during his campaign.

If you / anyone is honest they will admit Biden is DAIN BRAMAGED, dementia-ravaged, abd unfit to be President. 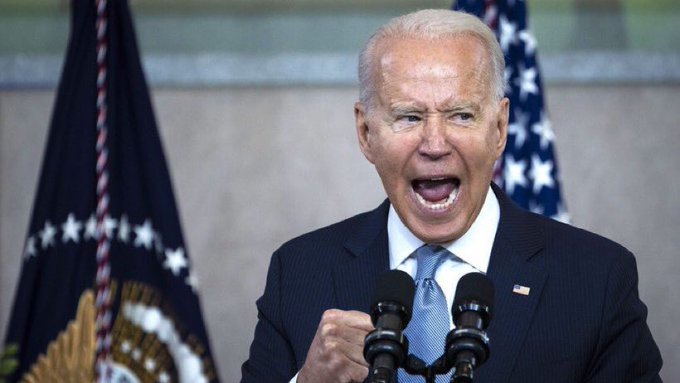 Case for Biden impeachment grows ... Perhaps we should just start doing the right things for the right reasons for a change and see how that
dennisghurst.com

JOE BIDEN COMMITS MULTIPLE TREASONOUS CRIMES On November 7, 2020, Joe Biden attempted a coup, he self-proclaimed the 46th president of the

I've often said that almost every president in the last one hundred years should have been impeached and removed from office for violating their oath to "uphold and defend the Constitution."But I have never seen a president openly say they knowingly violated the document.That is until Joe...

We have been dealing with YOUR shit policy for decades. Time to share the misery. YOUR KUUUNT ASS GETS ALL OUR ILLEGALS!!! SUCK THAT DICK, BITCH!!!
Click to expand...

We have every confidence that Republicans will come up with some lame, baseless, meritless, partisan reason to impeach President Biden.
The Bill of Rights no longer withdraws certain subjects from the vicissitudes of political controversy, our rights are now placed within the reach of majorities and officials at liberty to ignore and disregard legal Principles and Precedent. One's right to life, liberty, and property, to free speech, a free press, freedom of worship and assembly, and other fundamental rights are now in jeopardy, submitted to the capricious whims of partisan politics, dependent on the outcome of elections contrary to the rule of law and the original intent of the Framers.

Let's put Trump under oath and ask about Stormy Daniels and his tax returns! Let's ask him about declassifying Top Secret documents!
Click to expand...

g5000 said:
Especially the second one for the coup attempt. You bet!
Click to expand...

C_Clayton_Jones said:
The problem is those Republicans won’t be running the House.

Think of it as ‘revenge impeachment’ for Democrats impeaching Trump – again, impeachment as a partisan weapon.
Click to expand...

So how else are the Communists supposed to learn what goes around comes around? If they don't impeach Dementia over bullshit, what's stopping them from doing the same when they get power to the next Republican President, or the next one after that?

C_Clayton_Jones said:
“Republicans have been cuing up a potential impeachment of President Biden if they take back control of Congress in the midterm elections.

Now they just need to figure out what they might actually impeach him for.”


‘Impeachable whatever’: GOP floats impeaching Biden for ... something

Impeachment as a partisan weapon.

And needless to say, Republicans will make the same claim with regard to both times Trump was impeached.
Click to expand...

In reality they are impeaching pedo Peter's handlers
Socialism is the philosophy of failure, the creed of ignorance, and the gospel of envy

C_Clayton_Jones said:
We have every confidence that Republicans will come up with some lame, baseless, meritless, partisan reason to impeach President Biden.
Click to expand...

"Socialism is a philosophy of failure, the creed of ignorance, and the gospel of envy. Its inherent virtue is the equal sharing of misery.” —Winston Churchill

rightwinger said:
Our border has been breached for a hundred years
Even Trump
Click to expand...

Trump did something about it and Dementia reversed all of his successful policies so they could get into the country and stay illegally. His very first day in office he stopped the wall from being built. Why would anybody do that unless they wanted to see illegals entering this country? Sure you can.....the Congress can impeach just because....
They shouldn't....but they can.

Leo123 said:
Our Southern border has never been as insecure as it is under Biden. Millions pouring across and over 1/4 million unaccompanied minors. It's a real disaster and Biden has done absolutely nothing.
Click to expand...

rightwinger said:
I think Republicans should impeach Biden if he extorts Ukraine or attacks the Capitol
Click to expand...

He already extorted Ukraine as VP. So you are all for his impeachment? Good to know.

Rogue AI said:
He already extorted Ukraine as VP. So you are all for his impeachment? Good to know.
Click to expand...

Is Meadows the inside source, of the Trump team, providing information to DOJ?

Biden in the White House - Best Thing for Trump & Republicans

DOJ's new appeal could mean it will be 'Goodnight, Aileen'

Cruz: Big Tech is biggest threat to free speech, oversight of Ukraine aid is key, it's in US interest for Ukraine to beat Putin because he's our enemy

E
Failure of our so called education system
2