If the President's policies are making this nation worse

Does it matter?
To suppose that any form of government will secure liberty or happiness without any virtue in the people is a chimerical idea. - James Madison

Obama has made it much worse.

For instance taking 535 MILLION taxpayer dollars out of the stimulus bill to give it to Solyndra--a solar company that was turned down by the Bush administration because of financial instability--and was let into the oval office door--4 times in one week--to get this loan--avoiding all procedures and accounting--and against all e-mails advising the WH to not loan this company 535 million taxpayer dollars is beyond the PALE. They went bankrupt in Sept. 2011--as was told by an analyst through an e-mail that ended up on Joe Bidens desk. They ignored all warnings of an imminent collapse of this company and did it anyway.

In fact--it's corruption at it's best--as the main investor of this company was also a campaign bundler for Barack Obama in 2008.

Now we find out that 4 other green companies that Obama picked and loaned 300 MILLION too also went bankrupt. 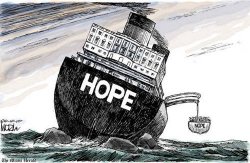 1) President Obama tripled the deficit.
Reality: Bush's last budget had a $1.416 trillion deficit. Obama's first budgetreduced that to $1.29 trillion.
2) President Obama raised taxes, which hurt the economy.
Reality: Obama cut taxes. 40% of the "stimulus" was wasted on tax cuts which only create debt, which is why it was so much less effective than it could have been.
3) President Obama bailed out the banks.
Reality: While many people conflate the "stimulus" with the bank bailouts, the bank bailouts were requested by President Bush and his Treasury Secretary, former Goldman Sachs CEO Henry Paulson. (Paulson also wanted the bailouts to be "non-reviewable by any court or any agency.") The bailouts passed and began before the 2008 election of President Obama.
4) The stimulus didn't work.
Reality: The stimulus worked, but was not enough. In fact, according to the Congressional Budget Office, the stimulus raised employment by between 1.4 million and 3.3 million jobs.
5) Businesses will hire if they get tax cuts.
Reality: A business hires the right number of employees to meet demand. Having extra cash does not cause a business to hire, but a business that has a demand for what it does will find the money to hire. Businesses want customers, not tax cuts.
6) Health care reform costs $1 trillion.
Reality: The health care reform reduces government deficits by $138 billion.
7) Social Security is a Ponzi scheme, is "going broke," people live longer, fewer workers per retiree, etc.
Reality: Social Security has run a surplus since it began, has a trust fund in the trillions, is completely sound for at least 25 more years and cannot legally borrow so cannot contribute to the deficit (compare that to the military budget!) Life expectancy is only longer because fewer babies die; people who reach 65 live about the same number of years as they used to.
8) Government spending takes money out of the economy.
Reality: Government is We, the People and the money it spends is on We, the People. Many people do not know that it is government that builds the roads, airports, ports, courts, schools and other things that are the soil in which business thrives. Many people think that all government spending is on "welfare" and "foreign aid" when that is only a small part of the government's budget.

Campaign for America's Future
Last edited: Sep 19, 2011
The USA is the only modern country in the world where full time workers live in poverty and have no health care (750k bankruptcies a year, most HAVE insurance - crap insurance!)After 30 years of Voodoo: worst min. wage, work conditions, illegal work safeguards, vacations, work week, college costs, rich/poor gap, upward social mobility, % homeless and in prison EVAH, and in the modern world!! And you complain about the victims? Are you an idiot or an A-hole?

how can Obama show his face at any campaign rally knowing that the 2 or 3000 people who showed up know about him flushing 535M down the toilet, and he wants to steal more money from tax-payers?
You must log in or register to reply here.

Is this Class Warfare?

92% Say Inflation Is A Serious Problem; 56% Say Build Back Better Plan Will Make It Worse
2 3

The use of historical evidence to determine constitutional rights
2 3

Will The Supreme Court Finally Strike Down Miranda Rights?? Let's Hope So!!
2 3