"Democrats aren’t laughing about Donald Trump anymore. He has them all but admitting defeat.

In a stunning admission, Hillary Clinton’s campaign manager predicts in an email that Donald Trump will become president if he wins the Republican nomination.

“If Donald Trump takes the Republican nomination, our party will lose more than the presidency,” Robby Mook writes to supporters."


Before both sides get too excited about this 'admission' they need to read the rest of what he says and realize this was not just an 'admission' / 'concession' but a calculated attempt to engage in a little 'fear-mongering': 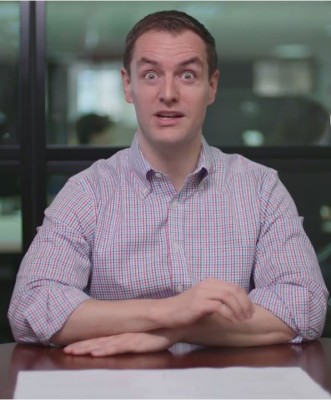 “Years of progress will be ripped away. Obamacare
will be repealed. Marriage equality will be rolled back.
Get excited to visit the wall on the Mexico border —
and get ready to pay for it if President Trump can’t
magically get Mexico to cough up the cash for it.”

'Muslims will be banned from America, government white-panel vans cruising the streets will snatch anyone who looks like an illegal and deport them, there will be (gulp) TERM LIMITS imposed, cats and dogs living together....Armageddon, I tell you!'

Mook completely ignores that UNLESS Trump (if elected) and UNLESS he intends to by-pass Congress and use EOs - like Obama has set the precedence for future Presidents to be able to do - there is no way Trump can effect all of that.

As far as having a wall at the border, why is he making fun of this. Putting up a fence / wall on the border has been a 'promise' (more like a 'carrot on a stick/string) for decades falsely offered to Americans if they would only allow more and more illegals amnesty. By 'making fun' of such a fence/border he actually, finally, admits there was never any real political intent to secure the border, that it was just a lie.

Furthermore, his assertion about paying for the fence is a false one. Mook implies that we have to 'convince' Mexico to pay for it, that the tax payers will have to do so if they refuse to do so. The fact is, ON TOP OF the millions of tax dollars Americans are being forced to spend out of their pockets every year to bring illegals into the country, settle them, house them, feed them, help them find jobs, provide them with food stamps / welfare...ON TOP OF the millions of tax dollars sent back to Mexico by illegals here in this country, politicians take even more hard-earned tax dollars and give it to Mexico every year as 'foreign aid'. POLITICIANS WOULDN'T HAVE TO CONVINCE MEXICO OF / TO PAY FOR SHITE, AND BUILDING A WALL AT THE BORDER WOULDN'T COST TAX PAYERS ANY MORE MONEY THAN WE ARE PAYING NOW! All politicians would have to do is STOP / WITHHOLD the millions in foreign aid going to Mexico and use that money to build a wall.
- Mexico has proved it has no intention of making any effort to stop it's people from illegally crossing our border, that they are NOT our 'friend'. So, cutting off 'foreign' aid to curb/halt the Mexican state-sponsored/encouraged criminal activity would be more than warranted.

BOTTOM LINE: Mook DOES fear Trump, but in this interview he simultaneously engages in a little bit of 'fear-mongering' to influence and try to convince Liberals to get behind Hillary as well as come out to vote instead of refusing to show up as they did in 2014, which resulted in the record-setting historic DNC loss.
You must log in or register to reply here.

trump May Have to Self Publish Presidential Memoir
2 3

A Magical Adventure Is About To Begin (Calling All Potter Fans!!!)