An Apple Original series by Ronald Moore ("Battlestar Galactica") -- "For All Mankind". 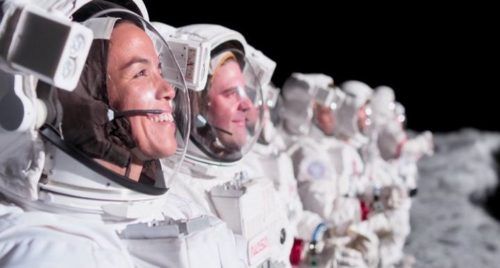 With a third season coming soon, this series presents an alternate history where the Soviet Union landed a cosmonaut on the moon one week before Apollo 11 and it changed the world as we know it.

The Cold War continues to wage, but in space where the next goal is a Moon Base in the 1970s and manned missions to Mars by the '90s.

America pulls out of Vietnam to devote resources towards expanding space exploration and the US never falls into the post Apollo / Vietnam ennui that has been affected our culture and politics for over 50 years.

Back in 1969, everyone ... from the guy who drives the bus to the head of NASA ... believed Apollo 11 was just the beginning of a future full of space exploration and bold achievements. Everyone at NASA had dreams of building a base on The Moon as a jumping off point for the rest of The Solar System. The plans were there for bigger and better launch vehicles and plans for exploring space. All of that went into the trash the day after the Apollo 11 crew returned. NASA changed from "let's get it done" to "let's get it over" and took part of our national energy and pride with it.

This show gives us a possible glimpse of how things might have turned out if we hadn't turned inward after Apollo 11 and fixated on our failure in Vietnam.

I recommend this show for anyone who is interested in what is one of the most pivotal moments of our History for the past 50 years.

According to WaPo the AR Was Developed by....Wait for it....Nazis!

the Media talking about QAnon

Another reason to not vote for Biden...he will surrender space to the Chinese...something we do not want...

Are we are being watched from afar?
2

Maxine Waters: "To hell with the Supreme Court, we will defy them!"
2 3

They Killed Roe: They're Not Done