Geda, the psychic monkey, picked Donald Trump to win the 2016 Presidential Election, choosing the card-board cutout of Donald Trump over that of Hillary Clinton.


'His name is Geda, and local legend has pegged him as a mystical monkey with prophetic insight — one with an impressive record of correctly predicting the winners of European soccer matches.

This time, Geda was asked to predict the winner of the U.S. presidential election and — unlike many a highly-paid pollster — he did exactly that, AFP reported, and with absolute conviction...'


In light of this I recommend we completely replace all major media political coverage of the next Presidential election and replace CNN, MSNBC, CBS, NBC, etc with GEDA the psychic monkey! 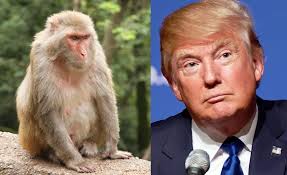 Replace polling with artificial intelligence… or this monkey - Hot Air
You must log in or register to reply here.

What should be done with Sanctuary Cities?

No gun were found among the protestors at the Capitol on Jan. 6......testimony from FBI states under oath.
3 4 5