I'll just keep posting the nocturnal ejaculations of people like Reich, Krugman, Robinson, and others.....who somehow think they are taken seriously when they write such truth challenged articles as will come out more and more as Obama slips under the waves.....

Robert Reich: Obama Is Back

President Obama did what he needed to do tonight. He took the debate to Mitt Romney. He was relaxed, even jaunty, as he scored one point after another. He seemed to be enjoying himself at Romneys expense. He looked more comfortable and commanding as the debate wore on, while Romney looked more stiff, edgy, and salesman-like.

Obama seemed to enjoy himself ? This guy needs a blood test.

One of my favorites to watch and laugh at:

Robert Shrum: Obama Had Everything On the Line and Delivered, While Romney Sputtered - The Daily Beast

As I argued after the Presidents parlous performance in the first debate, this guy is a fourth-quarter player who rises to the occasion under pressure. The Democratic sackcloth and ashes were, to put it mildly, premature given a history which had seen Obama ignite his flagging 2008 campaign with an electric speech at the Iowa-Jefferson-Jackson Day Dinnerand then a few months later, triumph over Hillary Clinton in the South Carolina primary debate, sealing both his victory in that state and for all intents and purposes his grip on the nomination.

I am afraid this wet dream probably ruined the entire mattress.
OP

How was Candy Crowley as moderator? She excelled in a difficult format, corralling the candidates when it was necessary -- Mitt Romney in particular was at times corrected on his facts (about the Libyan attack and the President's response to it) or repeatedly instructed to stick to the topic. She ably shut down filibustering attempts by both men.

That was good for a laugh.

To bad the author lives in N.C. where she'll see her state help put Romney in the White House come 2013.
OP

&lsquo;Romnesia&rsquo; and the weasel factor - The Plum Line - The Washington Post

Republicans are mocking the new coinage, claiming it reveals &#8212; along with the Big Bird hit &#8212; the superficiality of the Obama campaign. But there&#8217;s actually a serious point to be made about this. The &#8220;Romnesia&#8221; riff is all about resolving the strategic dilemma the Obama campaign has faced when portraying Romney as alternately a flip flopper and an extremist.

Of course, the man who said he wanted to change the tenor of politics...didn't say he wanted it to get more civil.......?
C

Talk about a bunch of lefties with a wet dream.

Of course a dream is all it is. Hope and change done hit the shitter.

“The whole aim of practical politics is to keep the populace alarmed (and hence clamorous to be led to safety) by an endless series of hobgoblins, most of them imaginary.”
- H.L. Mencken
OP

Why a Romney win would be bad for America - Salon.com

Essentially, Republicans looked around when Obama was sworn in and saw political opportunity. They had lost the White House and faced steep Democratic majorities in the Senate and House. In a way, this made them weak; they had no power to advance their own agenda. But it also gave them strength; they had considerable power to stall Obama&#8217;s agenda, and with economic anxiety rampant, it seemed logical to assume voters would blame the ruling party if things didn&#8217;t turn around quickly.

This is so funny.

It was DEMOCRATS who jacked up Obama....the GOP was not in any position to stop him.

too bad it splattered on us along the way....
"Democracy" is two wolves and a lamb voting on whats for dinner.

"Liberty" is a well-armed lamb willing to contest the majority decision.

"If you've got a business... you didn't build that. Somebody else made that happen."
---said the man who singlehandedly killed Osama bin Laden
S

Obama's got a record now.
“The whole aim of practical politics is to keep the populace alarmed (and hence clamorous to be led to safety) by an endless series of hobgoblins, most of them imaginary.”
- H.L. Mencken
S

thank you kind sir. Yes Obama does have a record and i think he hates it. OMG Pataki was awesome on that statement.
"on tax day, everyone becomes a conservative"
OP

they make it an artform. i really appreciate it.
"on tax day, everyone becomes a conservative" 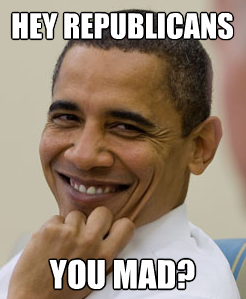 from what? not a strong record that even obama steered clear of.
"on tax day, everyone becomes a conservative"
OP

The guy spits all over himself when he talks.

He's lauding the Obama specifics. Like any left wing dupe...he's bought into the idea that a spending cut four years from now is a real spending cut.

BTW: the article says down 3.8 trillion in 10 years.....that does not even bring it down the 5 trillion Obama has increased it.....

Chickens always squawk when they're plucked.
Republicans get angry when it is said that it is the party to which Racists and Bigots flock.

And then they prove it.
OP

Chickens always squawk when they're plucked.
Click to expand...

That explains why so many people refer to the White House as "The Barnyard".

Rachael Madcow was on tonight and she looked like she was ready to cry. I love it. She wants to scream out how much she hates Obama....she just did a schtick on how he lied about a Reagan quote and she's all bent out of shape on Afghanastan. Now she's hard at it.....I can tell she really wants to call republicans bad names.

I love it !!! They just did an Al Sharpton commercial.

The gloves are off and the baboons of PMSNBC are now in open campaign mode.

The Justice Department just stuck it's nose in the state of Alabama.
You must log in or register to reply here.

Fort Hood and the Election

Our (U.S.) Government Has Become Too Big For Its Britches

Who Has Really Been Inciting Violence????

P
Poll: Only 49% Think Joe Biden Is Mentally Stable Enough to Be President
2 3

To people who say that todays music is mostly about drugs.

This is Joe Biden's Office