We hear the Anti-American gun grabbing loons spout that it's just a law to reduce crime. And we have come back with its a slow, incremental process eliminating guns from society. Take a look at the chart and it is clear what the overall outcome will be.

Legislative and Legal History of the California Handgun Roster

4/30/2009: During a short period of time in which the United States Constitution&#8217;s Second Amendment applied to states and local governments within the federal Ninth Circuit through a case called Nordyke v. King, The Calguns Foundation and 5 other plaintiffs &#8212; including the Second Amendment Foundation &#8212; filed a federal civil rights lawsuit called Peña v. Cid (now Peña v. Lindley) against the California Department of Justice that challenged the constitutionality of the state&#8217;s &#8220;Handgun Roster&#8221; laws. The Peña case, helmed by civil rights attorneys Alan Gura, Donald Kilmer, and Jason Davis, was argued at the trial court on December 17, 2013, on cross motions for summary judgment and is currently pending decision. 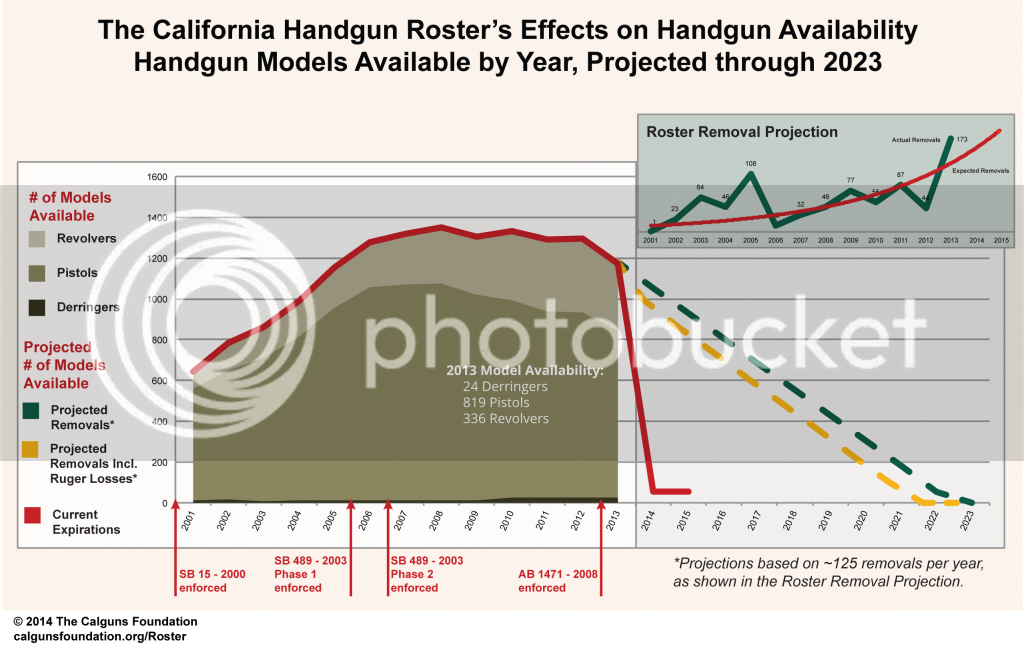 You know what they say.

So goes California, so does the Nation

Civil War may be more reality than blowvating

Glad to have recently relocated from the Shithole formerly known as the Peoples Republik of California. Fuck that place! Business unfriendly, allowing illegal aliens to PRACTICE LAW for fuck's sake.
OP

KingOfCars said:
Glad to have recently relocated from the Shithole formerly known as the Peoples Republik of California. Fuck that place! Business unfriendly, allowing illegal aliens to PRACTICE LAW for fuck's sake.
Click to expand...

I fully expect these Unconstitutional infringements to be overturned

I had to Google "blowvating".

Sensible California. What an oxymoron.
OP

Politico said:
Sensible California. What an oxymoron.
Click to expand...

For sure. But Cali is a perfect example of the mentally unstable gun-grabbers slow, methodical process of denying our second amendment rights.

If the political landscape in the US ever becomes so one sided as California...

Then Civil War in almost a given

-Geaux
You must log in or register to reply here.

Obama and the lies from this administration, 6 million NEW sign ups my ass

Late demands on the day of the debate... could it kill the debate afterall?
2 3