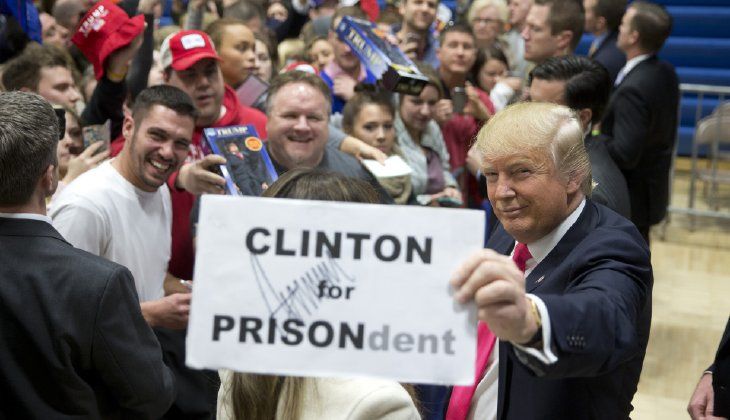 Republican presidential candidate Donald Trump pauses with a sign with his autograph on it while greeting his supporters at a rally Sunday in Council Bluffs, Iowa. (AP Photo/Jae C. Hong)

By PAUL BEDARD (@SECRETSBEDARD)
•
2/1/16 8:10 AM
Republican voters are far more gung ho to vote in the fall presidential election than Democrats, a sign that two terms of Democratic ownership of 1600 Pennsylvania Ave. may be at an end.

Longtime GOP strategist and pollster Ed Goeas told Secrets that the eagerness for Election Day is driven by one thing: Republicans want President Obama and his supporters out of the White House.

A new survey his company, the Tarrance Group, conducted for the centrist Republican Ripon Society uncovered an 11-point "intensity" gap among white Republicans and white Democrats.

"Why is it 11? It's intensity toward the president," he explained.

A deeper plunge into the numbers, Goeas said, is even more remarkable.

For example, Republican women, who typically don't express voting eagerness in levels as high as men, are equal for the first time, at 89 percent, he said. What's more, on the issue of intensity, they are just three points back.

"Not only is there no gender gap, there's no intensity gap with Republicans wanting to vote Republican this year, all driven by the president," the strategist said.

His poll found that the economy is a huge driver in the election, as is the concern by voters that they are getting further away from achieving the American Dream. For example, 53 percent said "time is running out" for the country to get back on track.

And that might help Republicans reach African-Americans and Hispanics.

It's apparently already happening among black and Latino middle-class voters, his poll revealed. Among African-Americans, for example, he found that 22 percent were voting Republican or undecided. Among Hispanics, 45 percent are already backing the GOP or are undecided.

"In the current economic and political environment, there are a significant number of middle-class voters whose first test of a policy will be its economic impact on them. This mindset provides a valuable opportunity for Republicans to increase their support among minorities," Goeas said.

I pulled all my black helicopters out of Iowa last Thursday.
OP

saveliberty said:
I pulled all my black helicopters out of Iowa last Thursday.
Click to expand...

If only your old man had of pulled out...

saveliberty said:
I pulled all my black helicopters out of Iowa last Thursday.
Click to expand...

If only your old man had of pulled out...
Click to expand...

Who would have pointed out your spelling/ grammer errors?
W

I've been in Iowa for almost a month and haven't seen any of those sumbitches.

I saw a Bernie bus one day. Bernie wasn't on it; they said told me they couldn't get me an introduction to Donald Trump, so I told them they're fired.
OP

Who would have pointed out your spelling/ grammer errors?
Click to expand...

Take you pick of any libtard queer.
You must log in or register to reply here.

Residents of Harney County are poor, white, and conservative.

Who Controls the US Drug Market?

Elections have consequences and the Populists won!
2

More than 90 million ballots cast as of Saturday

A moment ago
Clipper
C
O
Who and what the "Conservatives" are.
3 4 5

How Would You Rank Jan 6th In Human History's Worst Events?
2 3 4