Of the 100 top paid CEOs, 25 of them earned more than their companies' tax bill

Tax them to death so more jobs can move overseas and democrats can blame the tea party.........
OP
H

Since the biggest corps pay no effective taxes regardless of tax rates and jobs are moving overseas, then there doesn't seem to be any correlation between taxes and job outsourcing.

driveby said:
Tax them to death so more jobs can move overseas and democrats can blame the tea party.........
Click to expand...

do you think they are ''taxed to death'' now or the last decade or 2?
R

What about the ones that don't pay any taxes. Are they taxed to death too? And why aren't they making jobs? Republicans said they would make jobs. Don't tell me Republicans are wrong again. Well, at least they are the only political party with a perfect record.

hippie2049 said:
...the biggest corps pay no effective taxes regardless of tax rates and jobs are moving overseas...
Click to expand...

rdean said:
What about the ones that don't pay any taxes. Are they taxed to death too? And why aren't they making jobs?....
Click to expand...

If y'all think the purpose of companies is to hire people and pay taxes then y'all have probably never formed a business, hired anyone, nor paid any taxes.

I've created companies so I could feed my family. Sure, I also hired people and paid taxes but whenever a company's payroll and tax bill interfered with feeding my family I'd shut down the company. You may think I'm selfish for closing down companies. I think you're morons for never having started one while trying to tell me how to do it.

Well of course CEOs who figure out a way to eschew paying taxes must be worth every cent they're paid!

I mean isn't saving money from taxation ALSO a valuable skill worthy of a high salary??!!

If we want to blame anybody for this event, don't blame the CEOs who have learned how to game the system.

BLAME the people who allowed the system to be so GOD DAMNED gamable in the first place!

editec said:
BLAME the people who allowed the system to be so GOD DAMNED gamable in the first place!
Click to expand...

Are we still talking about CEO pay and taxes?

I / employees pay tax on our income and shareholders on their dividends. 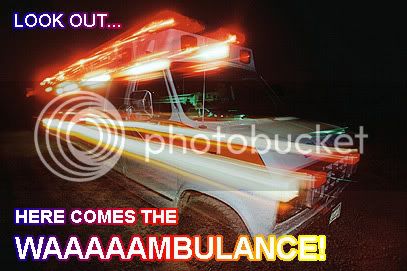 OODA_Loop said:
My corporation pays very little Federal tax. I / employees pay tax on our income and shareholders on their dividends.
Click to expand...

That's really how prosperity should work. 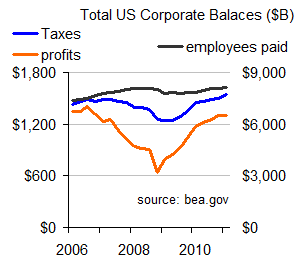 This crisis has seen corp taxes dip as profits hit the skids, but pay for employee salaries held steady. Since the previous 2007 peak corporate taxes and employee pay are both up while corporate profits still lag. You know it and I know it. Our left wing colleagues don't seem to notice.

I wonder how many college deans make more than their school pays in taxes.
B

Thanks for that link, which led me to another great one.

Want to know who is to blame, Mr. Big Shot Chief Executive? Just look in the mirror because the culprit is staring you in the face.

You helped create the monsters that are rampaging through the political and economic countryside, wreaking havoc and sucking the lifeblood out of the global economy.

Did you see this weeks cartoon cover of the New Yorker? Thats you in top hat and tails sipping champagne in the lifeboat as the Titanic is sinking. Problem is, nobody thinks its a joke anymore.

Did you presume we wouldnt notice that youve been missing in action? I cant say I was surprised. If youd insisted on trotting out those old canards again, blaming everything on high taxes, unions, regulatory uncertainty and the lack of free-trade treaties, you would have lost whatever shred of credibility you have left.
Click to expand...

Go you have any idea why do corporations pay taxes? Can you explain why it is necessary to double tax income made in a corporation, but not other types of businesses?

Looking for any links that talk about how foreign countries control CEO pay. Do they have a cap on earnings or really high marginal tax rates or what?

Look, if a public company decides to way overpay their CEO and top execs, isn't that an issue for the stockholders? If a sports franchise wants to pay their best players 10s of millions per year to play their sport, or a Hollywood studio wants to pay an A-list actor/actress 10s of millions to star in a movie, isn't that their call? Where do we get off deciding for somebody else how much is too much? Especially in a country where damn near half of the income earners pay no income tax or even get more back than they paid in.
B

we have corporate taxes only to pander to the pure and perfect ignorance of liberal voters. Corporations are tax collectors, not tax payers. Any expense they have , including taxes, is simply passed on to customers.

Liberals lack the IQ to grasp this and liberal politicians know it all too well. THe liberal Marxists scapegoat corporations out of pure ignorance.
You must log in or register to reply here.

The Financial Crisis From An MMT Point Of View

Gold is the constant...

What do you think of this girl singer on The Voice?