It's funny how our age of media stimulation overload generates 'pockets' of momentary magic. When TV was first 'exploding' into mainstream culture (arguably along with radio!), we remember classic 'experiences' such as Orson Welles' War of the Worlds 1938 radio broadcast or Franco Harris' miraculous televised Super Bowl touchdown for the Steelers known as the 'Immaculate Reception' in 1972.

Then, as society 'evolved,' we saw the televised real-time drama of the Los Angeles Race Riots of 1992 and then the shocking 9/11 terrorist attack on the Twin Towers.

In other words, modern media connects us together and offers us glimpses into shared experiences in the real world.

Since consumerism is now officially 'dogma,' and we're adapting into our new Wall Street/EU driven 'TrumpUSA,' we might consider how various media and Internet activities highlight our modern 'media world.'

For example...last night, the aspiring Philadelphia Eagles (NFL) played the hopeful Buffalo Bills in what turned out to be a rather tight game which went down to the very end --- down to the last 3 minutes of the 4th quarter.

The Eagles started out holding a 3-0 lead after the 1st quarter and headed into halftime with a 13-6 lead, after the Bills managed to score a late field goal (their second) late in the 2nd quarter. Buffalo then scored the only points in the 3rd quarter (their third field goal) and the first touchdown in the 4th quarter (with only 5 minutes left to play in the game). However, the Eagles sealed their 20-16 victory with a 1-yard touchdown run by Byron Marshall in the 4th quarter with only 3 minutes left in the game!).

It was a tight and symbolic game for two franchises who have always struggled on the national stage despite always playing gritty. The Bills made it to 4 Super Bowls under QB Jim Kelly but lost each game, while the Eagles went on a three-year NFC Championship streak but lost each time, missing the chance to play in the Super Bowl.

Yes, the Eagles and Bills are both gritty and ambitious teams with little to show for it except heartfelt play and numerous cheering fans (some argue that Eagles and Bills fans are the most loyal fans in the NFL --- and perhaps they need to be!).

This year's NFL season might see stand-out play from the Goliath Patriots (again) or the upstart Cowboys or exciting Raiders (if Derek Carr can pick up from where he left off after last season's heart-breaking injury). So, we might not see the Eagles and Bills add much spice to this 'equation,' which nudges us to consider how yesterday's simple but gritty televised game between the two cheered teams signified a general 'television optimism.'

As the defiant Philadelphia Eagles and the gritty Buffalo Bills took the stadium on a warm and muggy August night in 2017, few thought this televised game between franchises which boasted incredible fanfare but little Super Bowl success would generate much intrigue or drama. However, the game came down to the very end, and there were more than a few monkey-wrenches to keep people guessing about the outcome. During Halftime, a crazed eco-terrorist calling herself 'Poison Ivy' dropped 1,000 water balloons onto the crowd from her jet. It was a true cultural TV experience...

President Trump remarked, "This otherwise non-momentous game reminded us there is adequate 'strange-stimulation' in the media (on TV, etc.) that helps Americans forget about the horrors of 9/11 and the Los Angeles Race Riots!" Trump had no idea, however, that Poison Ivy would show up during Halftime to deliver her 'water-balloon prank.' Hollywood movie producers scrambled to create a movie adaptation of this 'cultural experience,' and one film-maker could foresee the cinematic title already --- The Football Balloons!

The game started out with ambitious offensive maneuvers by the Eagles and QB Wentz which unfortunately ended in only a field-goal score. The score remained 3-0 until field goals by the Bills kept it 13-6 at Halftime after an Eagles touchdown. The Bills then scored a field-goal and a touchdown (unanswered) before the Eagles scored the final touchdown of the game in the 4th quarter (with only 3 minutes left to play!), making the final score 20-16 in the Eagles' favor. Everyone remembered the simple human drama of the well-choreographed and focused (if 'stubborn' game), but no one forecasted the Halftime eco-terrorism lunacy (albeit harmless) of Poison Ivy (one fan had an 'Immaculate Reception' of her water ballons!). Would America remember this media 'event' as a giddy experience? Only time would tell... 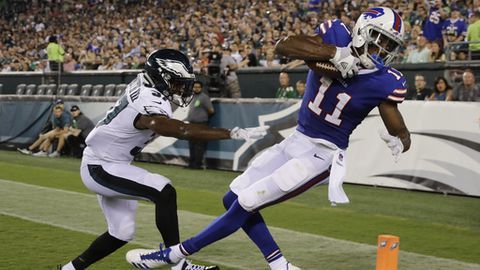 Cincinnati Bengals announce they have won the next Super Bowl!

A moment ago
ummmmmm
U

Q
Had my Window fixed today

Congress need to investigate ALL the riots
2 3

2 minutes ago
ummmmmm
U