Is a felony to threaten the President...

Assassination threats against Trump now flood Twitter
Saturday 12th November, 2016 - Donald Trumps shock victory in the US elections has triggered a flood of calls on Twitter and other social media outlets for the President-elect to be assassinated and authorities will investigate all threats deemed to be credible, The New York Post has learned.

The development comes as demonstrators continued to take to the streets for a second day across the US against Trump's victory in the country's presidential election. In Portland, Oregon, an estimated 4,000 protesters chanted "We reject the president-elect!", with some throwing objects at police, prompting several arrests. According to The Post, a simple search on Twitter can reveal dozens and dozens of calls to gun down Trump. Some posts called for both Trump and Vice President-elect Mike Pence to be assassinated, and there's even an AssassinateTrump hashtag. "Trump chose the literal worst case scenario as VP so nobody would try to impeach or assassinate him," one user posted on Twitter.

Last Saturday, Trump was rushed off a stage on in Reno, Nevada, where Secret Service agents took action after an "unidentified individual shouted 'gun'" in front of the stage. Authorities took the man, Austyn Crites, into custody, but did not find a gun, the Secret Service said in a statement, according to the Washington Post. Meanwhile, Trump, after blasting the media and protesters in aggressive tweets after people took to the streets to protest against the election results, Trump on Friday said he loves the "passion" of his countrymen for their country, media reported. "Love the fact that the small groups of protesters last night have passion for our great country," Trump tweeted, the New York Post reported. "We will all come together and be proud!"

The gracious gesture - playing down the widespread protests or what police labelled as "riots" - was a change from Thursday night when Trump flashed annoyance at his detractors. "Just had a very open and successful presidential election. Now professional protesters, incited by the media, are protesting. Very unfair!" Trump tweeted. Thousands of protesters have taken to the streets in major cities across the US since Trump defeated Democrat Hillary Clinton on Tuesday night, with the slogan "Not my President". Since Thursday, thousands of demonstrators, including immigration rights and environmental activists, have protested in cities like Boston, Los Angeles, New York, Philadelphia and Washington, D.C., in front of the Trump International Hotel.

On Wednesday in Wellsville, New York a passer-by spotted a swastika and the phrase "Make America White Again" on a softball dugout. Graffiti, with Nazi imagery and the word "Trump", was also discovered on a storefront in Philadelphia. Police said they would look into the incident, though they haven't received any reports. The New York City Police Department confirmed on Thursday that at least 65 persons were detained on different charges, including disturbing the peace and resisting arrest.

Law enforcement deals with anti-Trump protests flaring up across country - but what about the ones raging online?
Saturday 12th November, 2016 - Protests continued for the third day as thousands marched on the streets from the east to the west coast to vent their anger over the election of Trump.

Thousands took to the streets of Miami, Atlanta, Philadelphia, New York, San Francisco and Portland, Oregon, voicing anger at Trump’s inflammatory and often deeply controversial campaign rhetoric about immigrants, Muslims and women. In Miami, several thousand activists marched through the downtown, with a few hundred making their way onto a highway, halting traffic in both directions. In New York, demonstrators again gathered in Washington Square Park and by Trump Tower, where the Republican president-elect lives, on Fifth Avenue. 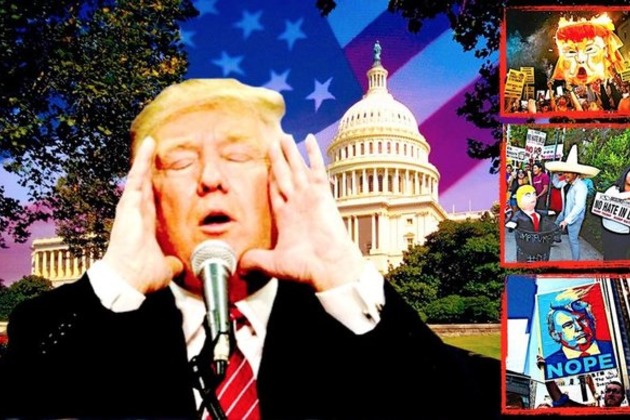 Between 500 and 600 people marched in Orlando on Friday in peaceful protests, police said. In Atlanta, hundreds of protesters took to the streets for the third night in a row. Organisers said several thousand people gathered on Boston Common to publicly object to the election of Trump. The evening event was billed as a rally for love and peace rather than a protest.

More protests and marches are planned for Saturday in cities that include Los Angeles, Indianapolis, Cincinnati, Las Vegas and New York, among others. There are also reports of a spurt in attacks targeting minority communities following Trump's unexpected victory earlier this week. Muslims, African-Americans and Mexican-Americans have reported been verbally and physically attacked just two days after Americans elected Trump as president.

“Today, we’re facing a new reality – a president-elect who has denigrated people because of their race, their religion, their ethnicity, their gender, and more,” SPLC President Richard Cohen wrote. “Our mission is to hold Donald Trump to what he is saying now – that he will be a president for all Americans and that he will work to bind the wounds of division, wounds that his own words have caused.” “During his campaign, Mr. Trump named far-right extremists as advisers,” Cohen claimed, linking to an article calling Sen. Jeff Sessions (R-Ala.) a “key politician in the anti-Muslim movement” and citing Sessions’ opposition of President Obama’s plan to resettle Syrian refugees as a reason for this label.

Cohen also claimed that Trump “re-circulated racist and anti-Semitic tweets, gave press credentials to a white supremacist radio host, and refused for months to disavow David Duke after the neo-Nazi endorsed him.” “Tomorrow, and every day in the future, we’ll fight for the rights of the most vulnerable people in America – those victimized by bigotry and discrimination,” Cohen wrote. “We hope Mr. Trump truly means what he says about reaching out to all Americans. But there is one group we hope he disappoints – the extremists who flocked to his candidacy and found in him a voice for their bigotry.”

The statement also cited post-election resources the SPLC is providing to teachers, including that teachers prepare “to engage in difficult conversations surrounding the various topics—racism, civil rights, immigration and so forth—that the election has raised.” “Now, white nationalists and the alt-right are celebrating his victory,” Cohen concluded. “If he means what he says, Mr. Trump must make absolutely clear to them that neither their ideas nor anyone affiliated with them will have any influence or voice in his administration. That is the first thing he must do to begin binding the wounds of division that his campaign has caused.”

The SPLC’s Hate Map lists the conservative Family Research Council (FRC) as a “hate group” because of its opposition to same-sex marriage. The “hate map” was cited by convicted domestic terrorist Floyd Lee Corkins as the way he found the FRC in his 2012 attack on the FRC in when he shot and wounded a security guard before being subdued.

Everyone is a far right extremist compared to progressive turds that coddle Muslims.
You must log in or register to reply here.

We got it right, and have the right President!

CNN against Trump back fire on them

The Left Has A Pedophilia Problem, And It’s Out In The Open
2 3

Hadley Huffman Got the Vaccine