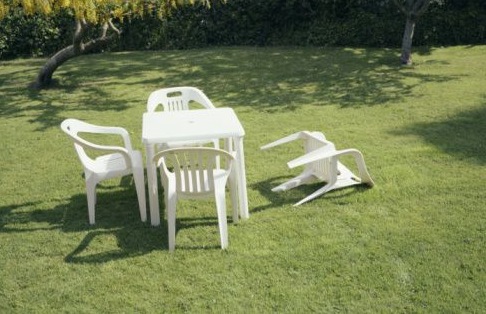 "You must spread some Reputation around before giving it to Chris again."

Location
Not fucking there !

Noop. You can't afford to.
W

Arm of Crucified Jesus Sheared Off by Earthquake at Historic Church
Thursday, August 25, 2011  The 5.8 magnitude earthquake that shook the East Coast on Tuesday rattled a historic church in Alexandria, Va. so hard that bricks fell through a stained glass window in the ceiling and then broke off the right arm of Jesus Christ on a large crucifix above the altar.

The damage occurred at St. Mary's Catholic Church in Old Town Alexandria, just a few miles across the Potomac River from Washington, D.C. Further damage to the church included collapsed chimneys and brick walls crumbling. It was the latter that sent bricks tumbling through a stained glass window above the crucifix in the church sanctuary that sheared off Christs right arm.

The Rev. Dennis Kleinmann told CNSNews.com that the damage could have been much worse and some parishioners have commented that the damage seems symbolic of Christs devotion to holding up the church in times of trouble. Kleinmann said he was in his rectory office when the trembler hit on Tuesday and his first thought was some kind of commotion taking place in the guest room upstairs. Then when things started falling off the shelves we knew something more was going on, Kleinmann said.

Kleinmann said a structural engineer has been hired to repair the churchs infrastructure and that there are stained glass experts that can restore the churchs stained-glass window. Fixing the Christ figure, however, may not be feasible given the rarity of craftsmen capable of such a repair, Kleinmann said. I dont know if its even possible, Kleinmann said of the repair.

According to the church's Web site, St. Mary's was established in 1795 "and is the oldest Catholic parish in the Commonwealth of Virginia. To fund the church, Colonel John Fitzgerald, friend of George Washington and an early mayor of Alexandria, took up a collection. According to local tradition, Washington himself made the first donation. A chapel was built at the south end of the city, on land still used today as St. Mary's Cemetery." The church was moved to its present location, 310 South Royal Street, in 1810.

Arm of Crucified Jesus Sheared Off by Earthquake at Historic Church | CNSnews.com
Click to expand...

Washington Monument closed due to a crack in it caused by that lil' quake.
A fitting metaphor for the state of our Union.

President Obama has just confirmed that the DC earthquake occurred on a rare and obscure fault-line, apparently known as "Bush's Fault". Obama also announced that the Secret Service and Maxine Waters continues an investigation of the quake's suspicious ties to the Tea Party. Conservatives however have proven that it was caused by the founding fathers rolling over in their graves.

clevergirl said:
President Obama has just confirmed that the DC earthquake occurred on a rare and obscure fault-line, apparently known as "Bush's Fault". Obama also announced that the Secret Service and Maxine Waters continues an investigation of the quake's suspicious ties to the Tea Party. Conservatives however have proven that it was caused by the founding fathers rolling over in their graves.
Click to expand...

FEMA denies aid to Virginia county at the epicenter of rare earthquake...

Political aftershocks over denial of quake aid to Virginia
October 10, 2011 | Seven weeks after a rare 5.8-magnitude earthquake jolted the East Coast, political aftershocks are reverberating after FEMA denied aid to the Virginia county at the epicenter of the temblor.

About 1,000 homes in Louisa County were damaged in the Aug. 23 quake, including a number that are uninhabitable, according to state officials, who estimate the damage at more than $80 million. A high school and elementary school have been closed because of damage. High school students are sharing the middle school campus with students attending class on longer, alternating days. Temporary structures were brought in for the displaced elementary school students. Yet FEMA has determined that the damage to dwellings "was not of such severity and magnitude as to be beyond the capabilities of the commonwealth, affected local governments and voluntary agencies," the agency's director, W. Craig Fugate, said in a letter to Virginia Gov. Robert McDonnell.

"If damage from a once-in-a-generation, 5.8-magnitude earthquake does not qualify for federal disaster relief, then I dont know what does," Sen. Mark Warner (D-Va.) said in a statement. Louisa County was in the national spotlight the day of the quake, but county officials say the attention has faded as damage to the Washington Monument and Washington National Cathedral attracted more sustained notice. "Our 15 minutes went real quick," Louisa County Supervisor Willie L. Harper remarked in an interview Monday.

McDonnell vowed to appeal FEMA's decision to the White House if necessary. "Disaster relief and public safety are core functions of the federal government," he said in a statement. "Unfortunately, volunteer groups are ill-equipped to repair earthquake damage and while state and local officials are doing everything they can, federal assistance is necessary in ensuring that affected Virginians are able to get their homes back in working order and get back on their feet again." McDonnell is seeking assistance such as low-interest loans for homeowners, renters and businesses, unemployment assistance, disaster housing assistance and crisis counseling. The epicenter of the earthquake was near the town of Mineral in Louisa County.

"This is the kind of disaster where federal assistance is justified and very much needed," said Bob Spieldenner of the Virginia Department of Emergency Management, said in an interview Monday. "Weve got some people who are living in homes they shouldnt be living in, he added. Harper called FEMA's decision a "great disappointment" but said officials were gathering additional information in hopes of persuading the agency to reconsider its decision. "Some homes are completely off foundations, he said.

Virginia has a Republican Governor. You're screwed.
B

Just hoping the devastation doesn't screw up any of Barry's future Beerfests.
You must log in or register to reply here.

Taxation Without Representation -The Case for D.C. Statehood
3 4 5

POLITICO: Trump declares state of emergency in D.C. ahead of inauguration. The Communist Party USA(Democrats) are in deep doo doo...
2

Trump Demands $10T in Reparations From China for Releasing COVID; Biden Admin Says (paraphrasing), "We Will Do Nothing."
3 4 5