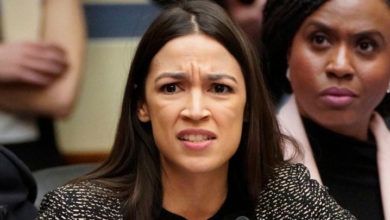 During an appearance on All In with Chris Hayes on MSNBC earlier this week, Alexandria Ocasio-Cortez condemned the rise of division in our country "when addition and subtraction are hard enough."

"What do you think about the state of politics, of all this division that we see everywhere in our nation?" Hayes asked.

Ocasio-Cortez thought for a moment before responding, or at least paused to give the appearance of thought: "I'm against division." The audience applauded.

Hayes nodded sympathetically, motioning for the studio audience to quiet down. "And what is it about division that you think harms discourse in this country?"

Again, there was a faint glimmer of thought in her eyes before she responded: "I think, like, numbers and stuff? Carrying the numbers left and right and back and forth is a lot to ask of people, and I think we're ready for a return to, like, what this country was founded on, like, addition. Maybe some subtraction. Addition and subtraction are hard enough. So, to like, have division is a capitalist construct."

Hayes stared on, dumbfounded. "Haha, no, I mean, division in the sense of---"

"Are you, a white male, mansplaining to me!?" Ocasio-Cortez snapped back, drawing cheers from the crowd. "Division -- especially long division -- is a natural part of a harmful, white supremacist society founded on hateful ideas like liberty and individualism. Any nation that tells people they must take one number and put it into another number cannot long survive."

"And don't get me started on multiplication!"

She would fail even when using ArKansas math!

She would get stumped after counting the first toe wondering what number came next when counting the next toe....

During an appearance on All In with Chris Hayes on MSNBC earlier this week, Alexandria Ocasio-Cortez condemned the rise of division in our country "when addition and subtraction are hard enough."
Click to expand...

So you wanna multiply with her, is that it?
You must log in or register to reply here.

B
Is Trump really a successful businessman

Republicans Against Trump, The Lincoln Project
2