An asteroid collision has cooled the Earth

An extraterrestrial trigger for the mid-Ordovician ice age: Dust from the breakup of the L-chondrite.... 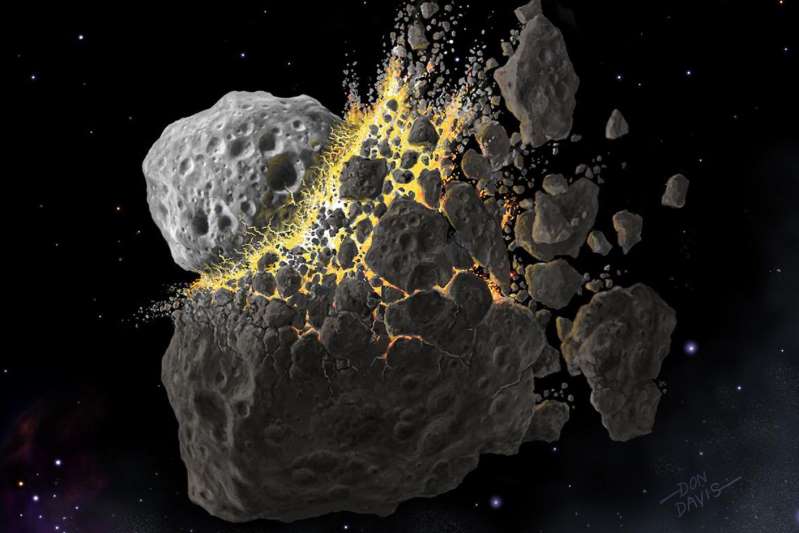 An asteroid collision 466 million years ago enriched the earth's atmosphere with dust, which filtered the Sun's rays and caused a cooling of the climate.
Finally, a study explains the climatic cooling that occurred 450 million years ago, causing a boom in biodiversity: the dust of a disintegrated asteroid would have invaded the atmosphere.
It is customary to say that the Earth has experienced five "massive extinctions" of its animal and plant species throughout its history (not to mention the sixth, which is taking place right now, due to human activities). The oldest of these biological crises occurred 445 million years ago: the so-called Ordovician-Silurian extinction, because it marked the transition between the great Ordovician geological period and the Silurian. Nearly 85% of marine species have disappeared. Mainly corals, bivalves (like mussels and oysters), echinoderms (sea stars and sea urchins) ... But what happened?
Biodiversification and glaciation
What is certain is that their cozy habitat has slowly but surely become inhospitable. The marine fauna was accustomed since the beginning of the Ordovician (485 million years ago) to a burning climate, due to a high concentration of CO2 in the atmosphere and therefore a big greenhouse effect, which heated the seas until at 45 ° C. Then the climate gradually cooled, until the water temperature approached the current levels of our tropical seas, and ocean life flourished comfortably. We have even given a name to this paradisiacal period for marine life: the great Ordovician biodiversity.

Representation of the great Ordovician marine biodiversity at the National Museum of Natural History in Washington, USA.

An extraterrestrial trigger for the mid-Ordovician ice age: Dust from the breakup of the L-chondrite parent body | Science Advances
You must log in or register to reply here.

Chris coumo 'Comes Out Of The Closet' To Attack God, America's Faith

Trump should drop out just like LBJ did, my friends, for the good of the party
2

For the forgotten men of 1st Platoon, Trump's pardon of an officer they helped convict of murder is a crushing betrayal
2