Aleppo battle: freedom fighters setting military milestonoes as extra Olympics open
London 2012 was scripted as the very last Olympics.
That's why the illuminati used it to pushh to new limits the celebration of satanism in plain sight.
Syrians were the main reason why they were forced to stage an extra unscripted Olympics opening ceremony.
"Coincientally" at the same time:
Aug 5, 2016, syrian freedom fighters are setting several military milestones by conquering Aleppo's artillery base,

One of those milestones: for the first time ever lifting a siege means also setting the enemy under siege,

BASICS
"Osama resurrects in Jerusalem" - why missing Boeing 777 script postponed, modified
Show to end all shows: Introduction: First act was scripted for one year before the last!!
Explanation reads like a chronicle of how illuminati overtime was extended after the original end date, Easter Sunday 2012.
Published days after Easter Sunday 2015
After 1,000 articles in 100 blogs, this was the first and so far only one to include an exclamation mark.
Explanation for Easter Sunday 2016 added together with the second one.
Illuminati Overtime: Jerusalem Osama resurrects 2012 postponed why missing Boeing 777 script reads like chronicle
W

Starvation stalks the resident of Aleppo...

'White Helmets' say Aleppo residents 10 days from starvation
Thu Nov 24, 2016 | The inhabitants of besieged rebel-held eastern Aleppo have fewer than ten days to receive aid or face starvation and death from a lack of medical supplies, the head of the Syria Civil Defence, or "White Helmets", said on Thursday.

The volunteer group which works in opposition-held territory and has rescued thousands of people from buildings bombed in the civil war is also running out of basic equipment from trucks to diesel and gas masks. "You cannot imagine how the situation is," Raed Al Saleh told Reuters through a translator. Saleh was in Stockholm to receive the Right Livelihood Award, known as Sweden's "alternative Nobel prize." "Doctors and the rescue workers in Aleppo are just using what's left of the equipment after bombardments to do whatever they can do," Saleh said. 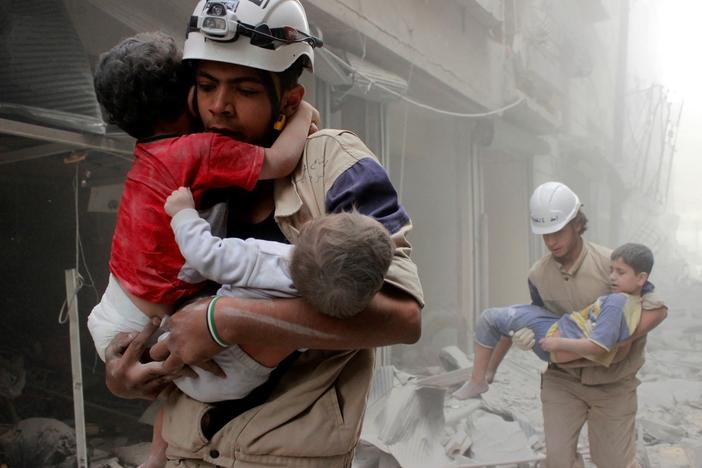 Members of the Civil Defence rescue children after what activists said was an air strike by forces loyal to Syria's President Bashar al-Assad in al-Shaar neighbourhood of Aleppo, Syria​
Rebels in the eastern part of Aleppo city have agreed to a U.N. plan for aid delivery and medical evacuations, but the United Nations is awaiting a green light from Russia and the Syrian government, humanitarian adviser Jan Egeland said on Thursday. 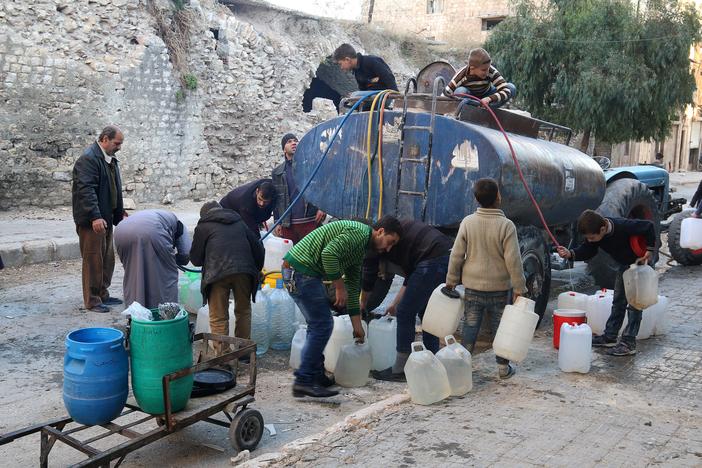 People fill drinking water into gallon jugs, in the rebel-held besieged area of Aleppo, Syria​
With freezing winter conditions setting in, about 275,000 people are trapped in eastern Aleppo, where the last U.N. food rations were distributed on Nov. 13. Saleh said doctors were so short of supplies they were resorting to making life and death decisions over who receives surgery. "They cannot accept everyone ... There are not enough materials and not enough doctors," he said. Saleh said the White Helmets had lost 50 percent of their equipment in the last two months.

Stop the war, the civilians want to get off...

They said civilians were in great danger and they would support any initiative to ease their suffering. The US and five Western powers also put out a joint statement calling for an immediate ceasefire to allow aid into rebel-held areas. The Syrian government has ruled out any further ceasefires. Its ally, Russia, has called all remaining rebels in eastern Aleppo "terrorists". In a separate development, Syrian state news agency Sana reported that several Israeli missiles struck the Mazzeh military air base outside the capital Damascus overnight, causing a fire but no casualties.

Tens of thousands of civilians are still trapped in rebel-held districts of Alepp, Syria's second city. One resident said those districts were now heavily crowded and there were fears that people faced being captured, detained and tortured to death. "I know people who literally did nothing, they just kept doing nothing for four, five years, they just wanted to stay in their homes and now they are being arrested by the regime," Wissam, a teacher and activist said. Food supplies are exhausted and there are no functioning hospitals after months of heavy bombardment.

The BBC's Lyse Doucet in Aleppo says officials there are preparing for another exodus, as families try to flee under fire in an extremely dire situation. Activist monitoring group the Syrian Observatory for Human Rights (SOHR) said the pull-back by rebels in Syria's second city came after days of heavy fighting. At least 15 people were killed overnight as heavy artillery fire battered the remaining rebel-held areas. State media confirmed the military had taken over the whole of the old city.

Government forces now control about 75% of eastern Aleppo, held by the rebels for the past four years. The rebels, who had been left with just a spit of land north-east of the citadel after recent government advances, abandoned it by Wednesday morning, retreating to territory they still hold further south.

OK, I am Already Sick to Death of the Olympukes

D
Proof that the covid vaccine is a placebo and does not prevent covid, 8 vaccinated Yankees test positive

When Will FBI/DOJ Start Using Photos To Bring Violent Antifa/BLM Terrorists To Justice As They Are Doing With Capitol Rioters?