Trump needs to come off more professional, but Chris Wallace was a disgrace.

I am embarassed to call myself an american after that debacle. Talk about losing all respect for the two debaters. It was an insult to citizens.
C

Well he's a well know Democrat so why would anyone think he would be fair??

Ray From Cleveland said:
People who are knowledgable of events and politics won't discard him based on his personality. That's what uninformed voters do. Unfortunately though, we need those uninformed fence sitters to win this election.
Click to expand...

No, Welfare Ray, Trump supporters are pig-ignorant racists. Even the manipulators who thought Trump could be controlled are having second thoughts now, which is why record amounts of wall street money are going to Biden.


Ray From Cleveland said:
It seems to me that Wallace made sure he touched all the Democrat talking points, but few of the Republicans. To be honest, I can't think of one.
Click to expand...

Because Wallace isn't a crazy person.

Ray From Cleveland said:
Good work at what? Besides using his VP position to make his family rich, he hasn't accomplished a thing in over 45 years. And his "put y'all back in chains" comment was made eight years ago. His comment about Obama was made when he won the primaries.
Click to expand...

His put you all back in chains was about what Republicans want to do to black people.

Let's be honest, Ray, you'd like to see your HUD neighbors in chains, because their welfare isn't as sanctimonious as your welfare.

Ray From Cleveland said:
Good work at what? Besides using his VP position to make his family rich, he hasn't accomplished a thing in over 45 years. And his "put y'all back in chains" comment was made eight years ago. His comment about Obama was made when he won the primaries.
Click to expand...

His put you all back in chains was about what Republicans want to do to black people.

Let's be honest, Ray, you'd like to see your HUD neighbors in chains, because their welfare isn't as sanctimonious as your welfare.
Click to expand...

Oh, and if a Republican ever said the same thing about Democrats, you wouldn't be jumping up and down screaming racism? You are such a phony.

DBA said:
Only an idiot would think that all 51% had tried all 15 drugs listed....but then again, you are a Biden supporter so that explains quite a bit. 37% is actually a very good number in support of HCL. If moron Democrats wouldn't have thrown such a tantrum when Trump mentioned it several months ago, more lives could have been saved. We all know it isn't about saving lives to Democrats, it is about winning the election and getting their way.
Click to expand...

I don't support either of them. I think they are both underwhelming. However, Biden is a lot better than Trump just by virtue of Trump being such a piece of shit. And no, this isn't a recent opinion by me, I have thought Trump was a piece of shit long before he became a politician. Things are that bad, that somebody like Biden is better than Trump. Unbelievable.

I have no idea if the 51 per cent have tried all the 15 drugs listed. Maybe they tried 7 including Hydro and found it wanting. Maybe it was 5. I don't know. Thing is, neither do you. It wasn't so much that Trump mentioned it, it was how he mentioned it - ie, he didn't have a clue (yet again). He is such a dumbfuck, as is anybody who would vote for the fat piece of shit.
Click to expand...

Sounds like you don’t like Trump, the man. I don’t like many of his personality traits, but I agree with the vast majority of his policies and he has gotten quite a bit done in 4 years. I fear that some are willing to sell the country to the left-wing Socialists/Marxists simply because they don’t like Trump’s demeanor. To me, that is just plain childish.
Click to expand...

It's more to do with him being a douche and he has no idea what he is doing. He is like a deer caught in headlights. But his biggest problem is his ego. When he walks in the room he absolutely thinks he is the smartest guy in the room. At any time, he is is not even in the top 50 per cent of smartest people in the room - including his rallies - which is really saying something.

Claudette said:
I agree and Trumps demeanor is why I like the guy so much. He says what he thinks and he doesn't give a rats ass if anyone like what he says or how he says it. Nothing phony about the guy.
Click to expand...

As if saying what you mean makes a man. There were a few world leaders around the world in the 1930s and 40s who were constantly saying what they meant...how did that turn out...
Everything is phony about the guy - from his bleached teeth through to his $70K a year hair updates..

Ray From Cleveland said:
Yeah, I'm sure that's what Rudy did. Recall is not having evidence. Remember too that Biden basically said the same thing, that they will be watching the polls.
Click to expand...

We should always remember both parties are corrupt to their cores, and this is the first election in over 30 years when Republicans are free from consent decree they signed in 1982 promising not to engage in voter intimidation. 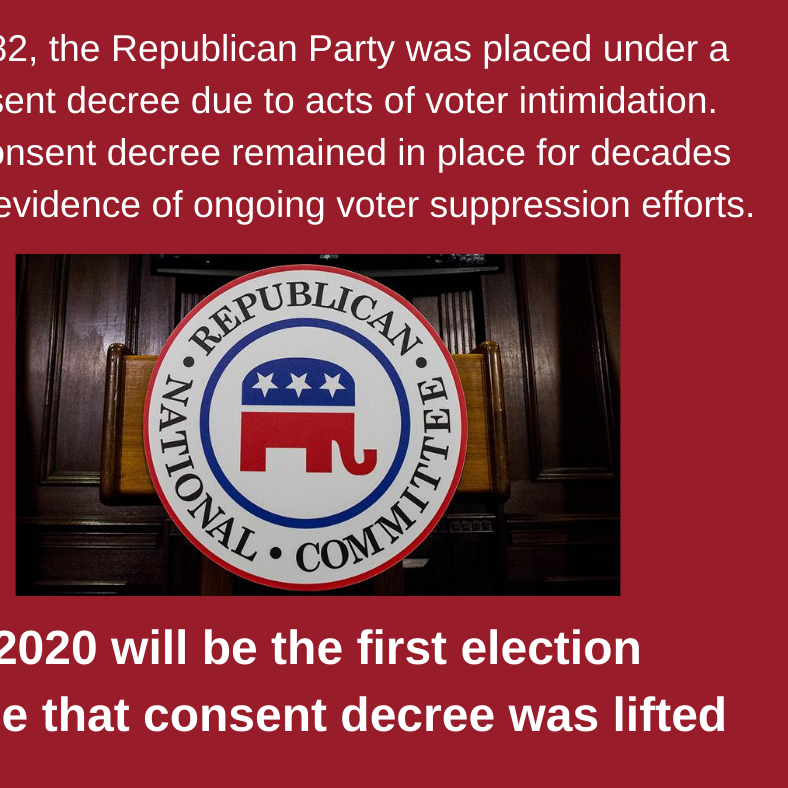 "The National Ballot Security Task Force (BSTF) was a controversial group founded in 1981 in New Jersey by the Republican National Committee (RNC) as a means of intimidating voters and discouraging voter turnout among likely Democratic voters in the gubernatorial election.

"The RNC and New Jersey Republican State Committee entered into a consent decree in 1982, barring them from engaging in further such conduct until 2017.

"The RNC unsuccessfully tried to lift the consent decree early; these attempts were rejected by the federal courts each time."

"The consent decree was set to expire on December 1, 2017. Democrats sought an extension to it based on allegations of new conduct, but the request was denied in January 2018 and the decree expired."
You must log in or register to reply here.

Are war’s generally viewed as a manly thing?

Why are we discussing "Biden's" policies on anything?

How many COVID deaths are attributable to Trump?
4 5 6

A moment ago
Zorro!
Z