The ten strangest places on earth

10 Most Alien and Weird Places on Earth


Number 3 is my favorite:

The McMurdo Dry Valleys are a row of valleys in Antarctica located within Victoria Land west of McMurdo Sound. The terrain looks like something not of this Earth; The region includes many interesting geological features including Lake Vida and the Onyx River, Antarcticas longest river. The valleys floor occasionally contains a perennially frozen lake with ice several meters thick. It is also one of the worlds most extreme deserts Under the ice, in the extremely salty water, live mysterious simple organisms, a subject of on-going research. Scientists consider the Dry Valleys perhaps an important source of insights into possible extraterrestrial life.
Click to expand...

White Sands in New Mexico I found to be fascinating.

RadiomanATL said:
10 Most Alien and Weird Places on Earth

USMB should have made the top ten!
OP

USMB should have made the top ten!
Click to expand...

Obviously we need to try harder then.

USMB should have made the top ten!
Click to expand...


Obviously we need to try harder then.
Click to expand...


If only the mods would allow Samson to post some of his octoporn, we'd prolly be #5.

Antarctica is the most interesting place on Earth and abounds with geological and temporal anomalies; its Dry Valleys definitely get my vote. I've saved some images which I was at some point going to post here, and you've given my my chance. Here are a couple:

Antarctica: Following are photos and descriptions of rocks artificially changed by wind, temperature changes and erosive agents like sand and salts 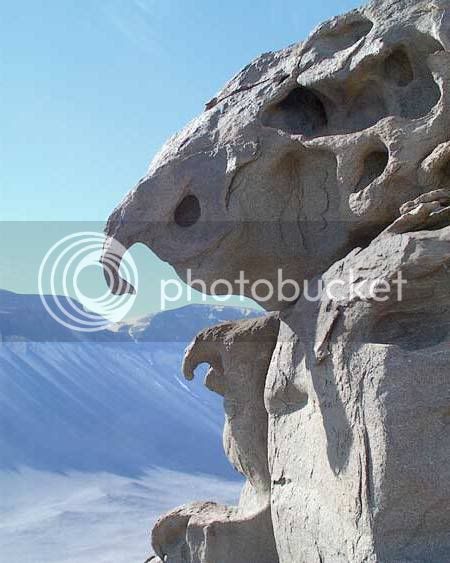 Below is a boulder field altered by the wind showing ventifacts in all stages of erosion; these are the hardest and most durable of stone, granitics. Notice how the shapes above were produced from cavernous weathering which erodes from below producing similar results time after time
Boulder Field in Bull Pass Antarctica

Here's how the process works:
"Many granite and dolerite boulders in moderately to old glacial moraines show evidence of cavernous weathering. This form of weathering can develop by either or both of two mechanisms: case hardening and core softening.

In case hardening, silica or other minerals are precipitated into microfractures, strengthening the outer portion of the rock against the attack of other physical and chemical processes.

In core softening, water-assisted chemical and physical weathering dis-integrates individual crystal grains from one another, while the rock still maintains its three-dimensional integrity. Attack by wind action and frost or salt wedging eventually cracks the "shell" of these rocks, and the softer interior materials break down and are removed by wind and gravity"
Last edited: Mar 14, 2010

Here's another ventifact from Antarctica. Notice this large boulder has been hollowed out by cavernous erosion as described in the post above. But notice there is a mysterious and anomalous spherical nodule(?) that has been preserved in situ over what has possibly been many eons of time 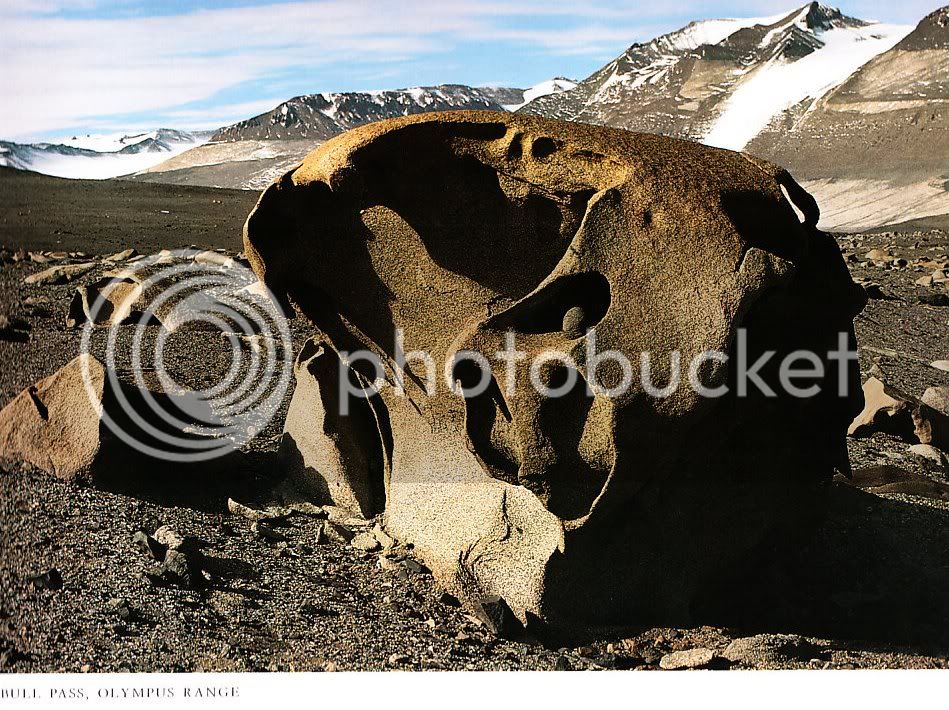 A moment ago
Crick