The courts should have taken on the voter fraud issue.

This is a mass delusion that the world has not seen in 80 to 85 years. And neither you nor I have the ability to talk them out of it.

"But but but if we had taken on the case and ruled fraud the Useful Idiots may have rioted in the streets". 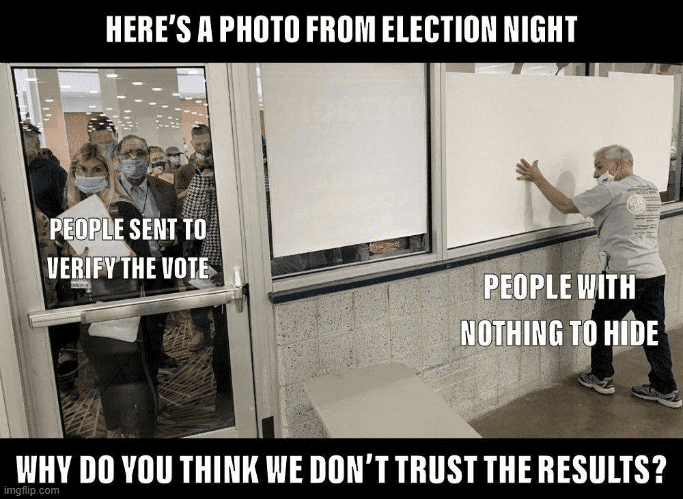 Votto said:
The courts should NOT have dismissed the voter fraud cases. They should have allowed them to approach the courts and with transparency show the American people it was either a concern or invalid.

They should have done this knowing if they did not, the nation would remain divided forever.

But perhaps this is what they really wanted all along.

And God forbid any of it might have gone Trumps way. That would have been unacceptable.
Click to expand...

The courts should have ignored the fact that there was no objective, documented evidence in support of ‘fraud’ and simply taken Trump’s lawyers’ word for it – scout’s honor.
Click to expand...

How do you know what the evidence is if you refuse to hear it?
Click to expand...

No one refused any evidence of voter fraud in the courts, there just was NO EVIDENCE presented to the courts on voter fraud.
Click to expand...

If a judge dismisses a case he still hears the evidence? Since when?
Click to expand...

That's how the judge knows when to dismiss cases.... each side presents a summary of what they got....then the judge decides if the case moves forward or dismissed for various reasons.

The judge can not make the decision to dismiss without review of the case and evidence presented.

They just don't simply say "dismissed", the judges give a summary of WHY the cases and evidence was rejected.
Click to expand...

Ok, where can average people review these summaries?
Click to expand...

PACER is the official U.S. site, they charge for downloading/printing copies of the documents but it's not a lot, I think maybe 10 cents a page.
Public Access to Court Electronic Records (PACER)

This site is free but there have been cases I've been unable to locate nonetheless I'd start here first, search on the information you have and if you still can't find it, then you can use the paid site:
Leagle Case Search

There is also LexisNexis for they are a bit pricey in my opinion and you might have to work in certain industries in order to get access to their databases, but I could be wrong about that last bit:
Welcome to LexisNexis - Choose Your Path

You can always go to the courthouse where the case was filed and get a copy of the docket & case files, even better if they have them online but that would be a lot of work since Trump et al have been rebuked, what is it, more than 70 times already?
Click to expand...

Great information, thanks....So, the bottom line from what I am reading, is that it would take a fair bit of research to find out what particular Judges have said in their opinions for dismissing individual cases...Something I can make a fair bet that no one in here has done...So, when people are thowing out blanket statements like "All the courts have decided that the cases had no merit", that is something that would need more time in research than I am sure anyone has done.
Click to expand...

Yes, after the fact it is harder to research it. But what I do, that makes it easy peasey, is when a thread here is started on Trump team lost or won in court....the news link to the story from all the reputable news sources, gives you a link in their article to the court case....and I read it right then.... that way I do not have to search for it some time later...
Click to expand...

Fair enough, but when you say "reputable news sources" in this day and age can mean only that you are limiting yourself to outlets that have a track record in the past 4 years of misleading you....Or worse yet lying by ommision, or making things up out of whole cloth....

The only way to get the true opinion from the Judge in question is to read it, if you can get to it....

But, as I suspect you are not alone...Most people are reading articles that have a vested stake in writing stories in favor of their personal feeling of outcome....
Click to expand...

As I said, any reputable news organization, like the main stream media, will give you a link to the actual court case and judge's filing summary, there for you to read it all.

I doubt the fake news like OAN, or Newsmax, or Breitbart, or The Gateway Pundit or any TRUMP news internet site, will give you the link to the court case.

The mainstream media in print, do not lie as you claim...They would lose their licence....whereas YOUR FAKE news media listed above, have no restraints on lying or creating total fabrications out of whole cloth.

If the mainstream press lies in a news article, they have to formally retract the story and let their customers know, they were incorrect.
Click to expand...

You're so fulla shit it is coming out my ears.
Click to expand...

I believe that she really believes that...However, I don't expect that when alone, and watching CNN or MSNBC that she agrees with everything they put out there....Same goes for print media....

Ya know, it's funny how liberals can screech endlessly about how Conservatives are so brainwashed by Fox News, and Talk Radio, when in reading their postings in here, many could have been written by Maddow, Lemon, or Cuomo word for word...
Click to expand...

thanks, i do believe what i believe!

but I watch your most visceral hosts on Fox as well, Judge Jeanine, Maria Bartiromo, Lou Dobbs, Hannity and Tucker on occaision in order to know what hate or falsities or whataboutisms your side is pushing!

I do not ever watch newsmax or OANN..... that's just too much bullcrap fake news to swallow for me!

Correct, I do not believe all of the left winger OPINIONS their media spouts, I can recognize it is biased opinion of the News of the day....while still recognizing, the news itself, is factual.
Click to expand...

As we all do believe what we believe, one of the reasons we are all involved in a message board like this is to hear differing opinions to understand that what is going on in the world is not always 100% what we think it is. In order to do that we all should be exposing ourselves to outlets that we may not agree with ideologically in order to expand our knowledge and understanding...

I try and watch a little of everything, including CNN, and MSNBC although I really can't take Joe and Mika...I just can't take them, I think they are without a doubt the dumbest people ever to get a show about news...

One thing I think we are all responsible to do, (rhetoric aside) is to take in as much as we can, dismiss the bs, and focus on the facts to form our opinions. Problem is that much like the term "racist" facts, and what constitutes a fact is under attack, politicized...I think this more than anything else is responsible for the division of the country...

Anyway, I hope our reasonable exchange here can be an example of what this message board can represent, and in the new year going forward, we should realize that we have different opinions, and are entitled to the same, but that doesn't make us un American, or anything other than what we have always been in this country, a wonderful experiment of how people can be free and hold those differing opinions without fear of oppression....

This is a mass delusion that the world has not seen in 80 to 85 years. And neither you nor I have the ability to talk them out of it.
Click to expand...

Trump's judges have put the Constitution and rule of law before any loyalty to Trump. What are you talking about?

This is a mass delusion that the world has not seen in 80 to 85 years. And neither you nor I have the ability to talk them out of it.
Click to expand...

Trump's judges have put the Constitution and rule of law before any loyalty to Trump. What are you talking about?
Click to expand...

Kids in Cages under Obama, Trump, and Biden
2 3