The Biden Doctrine Is An Obfuscation Of Our Moral Duty!

On Fareed Zakaria's CNN program today, Fareed made a claim that intellectual elitists and others make which is a flawed analysis and promulgation of bad government policy. Fareed's claim is that America and other Developed Western Democracies don't have to and shouldn't use their military to stabilize another country over fear that a terroristic regime will take over that country and export terrorism to Western Democracies causing loss of life because the West's especially the United States security services are so much stronger than they were on 9/11 that no 9/11 like terroristic event will ever occur again. This is not wisdom and I am not advocating the U.S. and its Western Allies do not use extreme caution and care and measurement on any decision on whether to deploy their military resources in a country that poses a risk of becoming a terrorist export factory. But to rest free people's lives and physical well-being solely on America's and its Western allies anti-terrorism agencies and policies is extremely, extremely foolish; yes there will likely never be an occasion in America where commercial planes will be used like missiles by terrorists and two to three thousand people killed in a single day. But our security agencies are not that good that they could always reliably stop a wealthy and resourceful terroristic organization, that a bad country could birth, from deploying a half dozen to a dozen terrorists armed with automatic rifles to attack a public gathering in the West killing forty to fifty innocent civilians or detonating a van packed with explosives on this public killing such numbers. To intellectual elitists this loss of life might not change their calculus but to ordinary people this does, these victims lives matter not only to themselves but also to their loved ones; and even not-large terrorist attacks put a pawl over an economy, people stop going to malls and concerts and other public gatherings for fear of terrorist's harm and this has a significant economic domino effect besides significantly harming the quality of life of people in affected communities!

In the media on Afghanistan and similar issues, some experts are now putting forth the "Biden Doctrine" which stands for the proposition that it is not good public policy that the United States military be used for "Nation Building". Thanks Be To God that the Biden Doctrine did not exist in 1776 because the country of France might have followed it and America's War of Independence would have lasted much longer and resulted in much greater loss of American's lives! Without the country of France's vital help in obstructing Britain's military effort by the use of the French Navy especially at essentially the final decisive Battle of Yorktown where the French Navy cut off reinforcement of the senior British General Lord Cornwallis and his army at this town in Virginia requiring him to surrender! It is not "good" that the U.S. government set forth policy that it is completely legitimate and appropriate to expend the lives and limbs of American men and women in uniform to fight wars of independence or civil wars for other countries it is the "responsibility" of indigenous people of those countries to fight those critical wars for themselves - America's army isn't the Free World's army; however, it is morally good under the right circumstances to help those indigenous people fight those wars. If we really believe countries like ours have a moral duty to support and aid democracy and freedom throughout the world and it should be more than just rhetoric and easy actions, if we believe our freedom and democracy is a gift from God who then expects us to help others acquire this awesome gift, if we recognize that evil in other countries that stem from bad authorities in those countries does not necessarily stay in those countries, if we recognize that in some countries if badness is allowed to take root and flourish it can pose grave security risks for our and our allies country then we believe that sometimes it is good and right for the U.S. government to send America's military to a foreign country to "help" "build a good nation"! 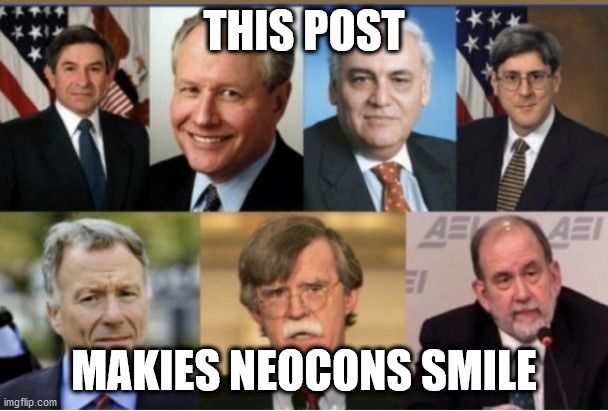 I blame the MSM and our Marxist education system, without which Biden would have never been installed in the WH, for all the wrongs of today. The media and our education system both need to be scrapped. Bury the teachers unions while you're at it.

The leaders were warned by George Washington and Ike Eisenhower not to fuck around like this but, nooooooooooooooooo.
To live is to suffer~Fritz Lang-Film Director

Another example of supercarriers being needed.

Biden has turned our allies against us
3 4 5

O
Which party is best for investors?

Adam Kinzinger's family disowns him - Calls him "possessed by the Devil!"
5 6 7