Since so many famous people and democrats think Harriet Tubman is so great, she should get a new bil

Make a new bill for Hairret Tubman, leave President Jackson on the 20 dollar bill. | We the People: Your Voice in Our Government

Here's some more information about this petition:

Harriet Tubman is an inspirational figure, and represents a part of history we should not forget. I propose that she is worth making a brand new bill for. Now what that bill is, is for the treasury department to work out, whatever they find would work best in the economy. President Jackson, however, should not be pushed to the back of the twenty. He is a war hero, and he fought for the everyday citizen. He made it so common people could get a bank loan, and attend white house events, and he also wanted to abolish the electoral college to make their votes count. Harriet Tumban was a determined and courageous individual. However we should not undermine another figure to bring up another. Jackson's name has been dragged through the mud quite a bit, but I'm not forgetting his victorys.

Uh, its not "famous people and Dems".

Its Americans who believe in the principles the US was founded on and in the rights guaranteed by the US Constitution.

If the white supremacists/kkk slime don't like it, tough. This is still the United States.
FORE!!
TRUMP KNOWS THE BEST STUFF
Jobs Created By trump
Don't confuse my personality with my attitude. My personality is who I am. My attitude depends on who you are. ~~ Frank Ocean
"Conservatives are not necessarily stupid, but most stupid people are conservatives." ~~ John Stuart Mill
@DarkFury Stalker Wannabe and Joe Arpaio's BFF
S

I have no problem with somebody new but I just think ther are so many more people who have made more of a contribution to this country. Someone who worked tirelessly to give women the vote or,someone who led the civil rights movement have had a lot more effect on the American experience.

Not likely.
Zone 2": Political Forum / Israel and Palestine Forum / Race Relations/Racism Forum / Religion & Ethics Forum / Environment Forum: Baiting and polarizing OP's (Opening Posts), and thread titles risk the thread either being moved or trashed. Keep it relevant, choose wisely. Each post must contain content relevant to the thread subject, in addition to any flame. No trolling. No hit and run flames. No hijacking or derailing threads.

Location
In the center of it all

Shrimpbox said:
I have no problem with somebody new but I just think ther are so many more people who have made more of a contribution to this country. Someone who worked tirelessly to give women the vote or,someone who led the civil rights movement have had a lot more effect on the American experience.
Click to expand...

She did both of those things, and more.
Mankind is kept alive by bestial acts

When the world is sick
Can't no one be well
But I dreamt we were all beautiful and strong.​
W

Find Another Way to Honor Harriet Tubman - ‘Maybe a $2 Bill’
April 21, 2016 – Former GOP presidential candidate Dr. Ben Carson told Fox News on Wednesday that instead of Harriet Tubman replacing former President Andrew Jackson on the $20 bill, maybe she should be on the $2 bill.

When asked if he was anti-Harriet Tubman, Carson said, “No. I love Harriet Tubman. I love what she did, but we can find another way to honor her, maybe a $2 bill.” “The point being we have lots of options here. We can have a $200 bill, but Andrew Jackson was the last president who actually eliminated the national debt. That’s no small feature. We also have the possibility of putting one person on the front of the bill, one person on the back of the bill,” Carson told Fox’s Megyn Kelly on “The Kelly File.” “That’s what’s happening. He’s moving to the back. She’s moving to the front,” Kelly pointed out.

“It doesn’t matter who’s on the front, who’s on the back, but the point being that would be very symbolic, because Harriet Tubman was a slave herself, and Andrew Jackson was a slave owner, and to give them equality like that I think would be a great symbol,” Carson said. “You’re making (Treasury Secretary) Jack Lew’s argument. He’s saying that’s what I’m doing. Jackson’s there. He goes to the back, and the woman who was a slave and fought slavery and fought for women’s rights as well, she’s going to the front, so what’s your problem, Dr. Carson?” Kelly asked. “It’s not a problem. In fact, I think there’s been so many great women in the history of America. The fact that we don’t have any of them on any of our currency I think is a shame, and we have the opportunity now to do that, so that really was the point that I’m making. I don’t think we necessarily have to kick somebody else out of the way. We have plenty of opportunities to honor those that have done great things,” Carson replied.

“Greta was suggesting earlier we should create a new bill. Why don’t we have a $25 bill? Everybody wins. What do you think of that?” Kelly asked. “That’s a good possibility too. We have lots of possibilities, all kinds of things that we can do, but as you can imagine, there will come a time when we won’t have currency at all. I don’t think it’s all that far into the future,” Carson predicted. “Some groups today came out and said, look, Harriet Tubman was bought and sold as a commodity, and the Treasury – unless it’s a master of irony – is not getting that maybe she wouldn’t want to be the symbol of a bill at all. Your thoughts on that?” Kelly asked. Carson said no matter what you do, someone will be offended. “That’s the society that we live in. I do know about that. It’s kind of ridiculous, but that’s why I don’t pay it a whole lot of attention,” he said.

Harriet Tubman: Former slave who risked all to save others
Thu, 21 Apr 2016 - Harriet Tubman, who will appear on the new US$20 bill, risked her life over and over again to spirit slaves to freedom on the "underground railroad".

Sometime in mid-October 1849, Harriet Tubman crossed the invisible line that borders the state of Pennsylvania. Tubman, a slave and later prominent abolitionist who has been chosen as the face of the new $20 bill, had escaped a plantation and was partway through a near-90 mile (135km) journey from Maryland to Philadelphia, and from bondage to freedom. She left the plantation, in Dorchester County, Maryland, in September and travelled by night. Her exact route is unknown, but she probably walked along the Choptank river and journeyed through Delaware, guided by the North Star. 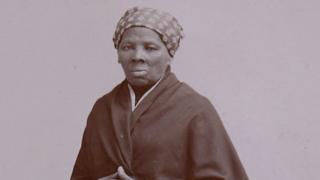 Harriet Tubman served as a spy and a nurse during the US Civil War​
Years later, she recalled the moment she entered Pennsylvania: "When I found I had crossed that line, I looked at my hands to see if I was the same person. There was such a glory over everything; the sun came like gold through the trees, and over the fields, and I felt like I was in Heaven." In the years that followed, Tubman returned again and again to Maryland to rescue others, conducting them along the so-called "underground railroad", a network of safe houses used to spirit slaves from the South to the free states in the North. Later, she became a Union spy during the Civil War, a prominent supporter of the women's suffrage movement, and a famous veteran of the struggle for the abolition of slavery.

But in September 1849, aged 27, Tubman was an unknown slave, uncertain about her future in the wake of her master's death. Fearful of being sold further south, she gathered her two younger brothers, Benjamin and Henry. On the night of the 17th they escaped. With the help of their father, who had been granted his freedom, the three fugitives hid for three weeks. A notice published in a local newspaper offered a $100 reward for the return of each of them. Scared of what lay ahead, Ben and Henry had a change of heart and returned. Tubman, with a steely determination that would come to define her, pushed on alone.

Take that cracker off the $20 bill and put the Black woman on it.
Say it loud I'm Black and I'm proud
B

Huey said:
Take that cracker off the $20 bill and put the Black woman on it.
Click to expand...

Put the nigga on the back, just like in the bus.
Nonessential government worker in training...

put a cherry-bomb up blastoffs azz and watch him blast off LOL.
Say it loud I'm Black and I'm proud
You must log in or register to reply here.

Slavery and White Fear of Revenge

J
Democrat Election Bill Is A Dog Of A Bill!

Every time the left yell Jan 6th Jan 6th...save this video of the truth.