New its clear Erdogan is putler´s poodle. " Turkey says thousands of migrants have crossed to EU"

New its clear Erdogan is putler´s poodle. "
Turkey says thousands of migrants have crossed to EU"


instead of fight the golden horde (Muscovites) he fights EU/West . i hope kurds will take him down one day , traitor 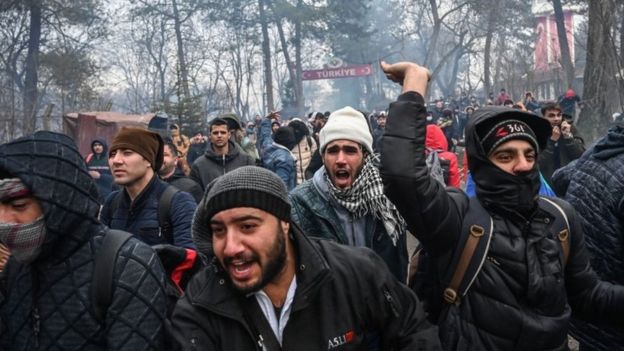 Syria, Turkey, and Russia, When What’s to Come is Still Unsure (Part 1)

It was not even two months ago, at the beginning of January, that Turkish Prime Minister Erdogan and Russian President Putin seemed to be best friends forever. Turkey had continued to insist, against the wishes of the United States and other NATO members, on buying the Russian S-400 missile defense system, even if that infuriated the Americans (which also meant that Turkey would not be allowed to buy the American F-35 stealth fighter jet). At a meeting in Istanbul on January 8, the two leaders inaugurated TurkStream, the dual natural gas line connecting their countries, opening up a new export path for Russian gas into Turkey and Europe. Both Erdogan and Putin were beaming, promising ever greater cooperation in trade and diplomacy. That was then.

But this is now. At the very end of February, Turkey was threatening to destroy the advancing Syrian army in Idlib, and also wanted to make sure that Russia would keep out of any direct involvement on the Syrian side. Furthermore, Turkey is demanding that NATO back it up in any clash with Russia, apparently still laboring under the illusion that NATO members will come to Turkey’s aid, and enforce a no-fly zone in Idlib Province, against both Syrian and Russian planes. NATO is a mutual defense pact that is supposed to be invoked when a member state is the object of aggression. But in Syria, Turkey moved its forces uninvited into Idlib province, and could well be considered not the victim of aggression, but the aggressor. Further, Erdogan’s many anti-Western statements and acts, including his plans for a pan-Islamic military force to destroy Israel, and his remarks about a possible war “between the crescent and the cross,” leaving no doubt as to which side in that conflict Turkey would be on, have made many NATO countries most unenthusiastic about taking Turkey’s side in a dispute of its own making.

Here is the latest news about the recent attack on Turkish troops by the Syrian army in Idlib, and its possible consequences.

Syria, Turkey, and Russia, When What’s to Come is Still Unsure (Part 1)
You must log in or register to reply here.

Will Joe Biden show any courage and actually debate Trump on stage?
20 21 22

Why schools in the United States should not re-open this fall.
7 8 9

A moment ago
Nova78