odanny said:
If he was not arrested, he should be banned from ALL Walgreens, and be arrested if he ever sets foot inside another Walgreens.
Click to expand...

It was Walmart, dumbass

Mac1958 said:
One of them told me that investing fees are communist. Mind-blowing.

You want to laugh, but there a lot of these people. The lunatic fringe is now 30% to 40% of the country.
Click to expand...

They have no fear of appearing to be loony in public because well, they are... Lol
S

Dana7360 said:
This group is bat crap crazy. They are going to pharmacies around the south harassing pharmacists.

This pharmacy at Walmart was warned he was coming so closed up.

The crazy man who is telling pharmacists they will be executed, lied to the police and told the police that he was there to get vaccinated and screamed discrimination. I don't know how he was being discriminated but it's wrong to lie to the police. It doesn't surprise me though. I have never encountered a republican who ever takes responsibility of their words or actions.


An Alabama man who called himself the 'vaccine police' told pharmacists at a Missouri Walmart that they will be 'executed' if they continued giving COVID-19 shots
Click to expand...

Surprise, surprise.. They are religious.

The man identified as Christopher Key, an anti-vaxxer from Alabama, live-streamed the confrontation on Facebook last week, on August 16, according to the Springfield News-Leader.

The video shows Key and a handful of supporters praying in the parking lot of the supercenter before entering. During the prayer, a person could be heard saying: "Thank you, Lord Jesus, for waking up Springfield" and "help us put the fear of God in these pharmacists."

"Okay, guys, this is the vaccine police. We're outside of Walmart about to go in. We're going to put Walmart and the pharmacists on notice to let them know that there in violation of the Nuremberg Code," Key said in the 30-minute live stream.

He continued: "We're going to let them know that 45,000 people within three days of receiving the vaccine dropped dead. And if they give one more vaccine after today, after being put on notice, then they can be hung up, and they can be executed."
R

They have no fear of appearing to be loony in public because well, they are... Lol
Click to expand...

As opposed to these folks? 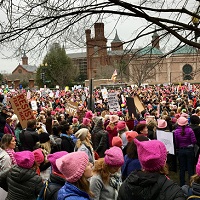 But it is an army lacking a common purpose. Lacking a common cause. Every one of them wielding a placard for a different grudge they bear. Many unable to give a coherent reason for being there. Most at odds with the placards they carried. -Katie Hopkins

SassyIrishLass said:
It was Walmart, dumbass
Click to expand...

Christopher Key has a long track record for attention seeking crazy behavior..
You must log in or register to reply here.

Maryland man, 46, is charged after shooting dead his pharmacist brother and his wife for 'killing people with the COVID shot'

J
You Who Choose Permanent Death. Why Do You Do That?
2

A moment ago
JAG
J

Canada caught off guard by new security pact between U.S., Australia and Britain
2

1 minute ago
busybee01
B
View more…