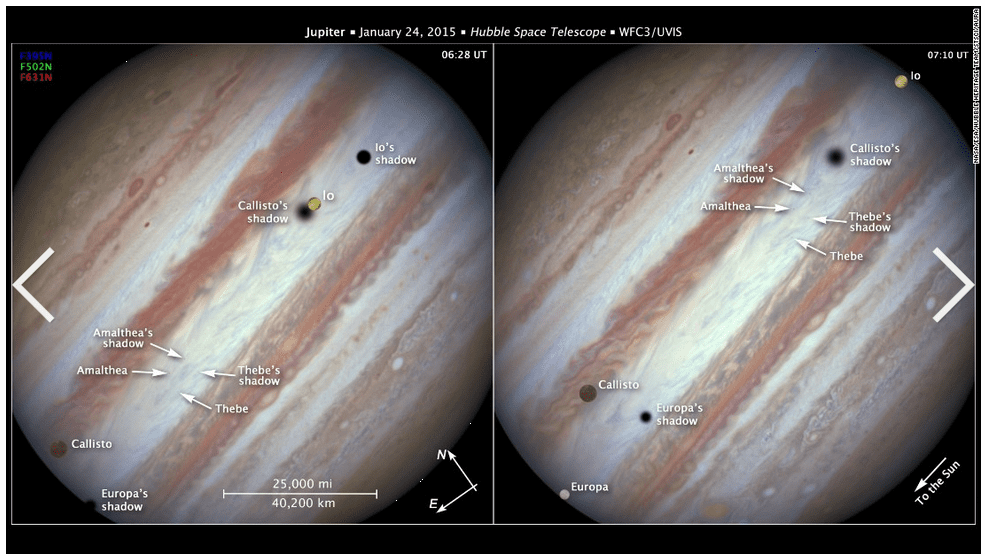 
The Hubble space telescope peers hundreds, thousands, millions of light-years into the universe to study novas, quasars and nebulas.

But weeks ago, it pulled its focus way in close -- to just light-minutes away -- to view a rare and beautiful spectacle at the planet Jupiter.

Three big moons crossed past it at the same time, casting their shadows onto Jupiter's swirling surface.

From the perspective of people theoretically standing on Jupiter, it would be like three solar eclipses happening at once, astronomers said.


In the last 15 years, this has happened only twice, the Space Telescope Science Institute said. "The next one will be 2032," said astronomer Carol Christian.

So, Hubble shot photos rapid fire to capture the rare conjunction in late January. And STScI published them Thursday, along with a short fast-motion video animation.
Click to expand...

Thanks for posting.
W

Solar Storm Activates Jupiter’s X-Ray ‘Northern Lights’
March 25, 2016 - Earth is not the only planet in the solar system with aurora borealis, or Northern Lights, according to a new study.

Jupiter, it turns out, also has a similar phenomenon, only the X-ray aurora on the gas giant is “hundreds of times more energetic” and “eight times brighter” than we see here. They are also larger than the entire surface area of Earth, researchers said. Researchers say this is the first time Jupiter’s X-ray aurora has been examined thanks to a “giant” solar storm that hit the planet.

The study is based on observations made in October 2011 when a massive solar storm, a coronal mass ejection, reached Jupiter. Using that data, the researchers built a “3D spherical image to pinpoint the source of the X-ray activity.” “In 2000, one of the most surprising findings was a bright ‘hot spot’ of X-rays in the aurora which rotated with the planet,” said William Dunn, a PhD candidate at University College London Mullard Space Science Laboratory and lead author of the new study. “It pulsed with bursts of X-rays every 45 minutes, like a planetary lighthouse. When the solar storm arrived in 2011, we saw that the hot spot pulsed more rapidly, brightening every 26 minutes. We’re not sure what causes this increase in speed but, because it quickens during the storm, we think the pulsations are also connected to the solar wind, as well as the bright new aurora.” 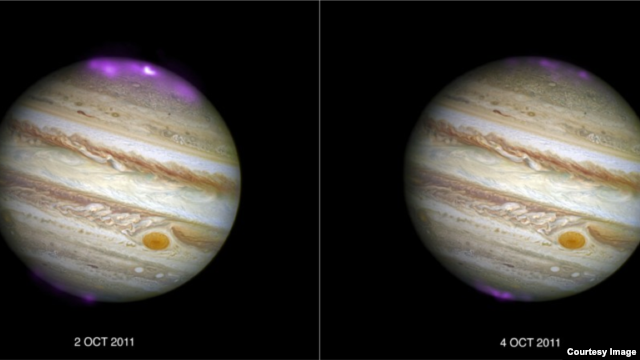 Jupiter’s X-ray emission (in magenta and white, for the brightest spot, overlaid on a Hubble Space Telescope optical image) captured by Chandra as a coronal mass ejection (CME) reaches the planet on 2 October 2011, and then after the solar wind subsides.​
They said the study sheds light on the relationship between Jupiter’s magnetic field (a.k.a. magnetosphere) and solar wind. Earth’s Northern Lights, too, are caused by the interaction of solar wind with the planet’s magnetosphere. “There’s a constant power struggle between the solar wind and Jupiter’s magnetosphere,” said Dunn. “We want to understand this interaction and what effect it has on the planet. “By studying how the aurora changes, we can discover more about the region of space controlled by Jupiter’s magnetic field, and if or how this is influenced by the sun. Understanding this relationship is important for the countless magnetic objects across the galaxy, including exoplanets, brown dwarfs and neutron stars.”

When giant solar storms arrive at Jupiter’s magnetosphere, they push its boundary by 2 million kilometers. This, researchers say, causes the planet’s X-ray aurora. “Comparing new findings from Jupiter with what is already known for Earth will help explain how space weather is driven by the solar wind interacting with Earth’s magnetosphere,” said Graziella Branduardi-Raymont, an astrophysicist at UCL Mullard Space Science Laboratory and a co-author of the study. “New insights into how Jupiter’s atmosphere is influenced by the Sun will help us characterize the atmospheres of exoplanets, giving us clues about whether a planet is likely to support life as we know it.” The study was published in the Journal of Geophysical Research – Space Physics.

The image was taken using the Hubble Space Telescope and shows the auroras, which are bigger than Earth, lighting up the gas giant’s poles. While Earth also has auroras, they’re caused by solar storms as opposed to Jupiter’s, which are caused by the massive planet pulling in charged particles from its surroundings as well as the solar winds. "These auroras are very dramatic and among the most active I have ever seen", says Jonathan Nichols from Britain's University of Leicester and principal investigator of the study. "It almost seems as if Jupiter is throwing a firework party for the imminent arrival of Juno." The Juno space probe is days away from a rocket burn that will insert the spacecraft into Jupiter’s orbit later this month. 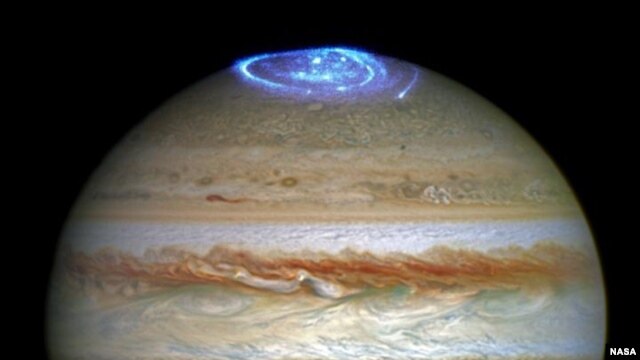 This image combines an image taken with Hubble Space Telescope in the optical (taken in spring 2014) and observations of its auroras in the ultraviolet​
The probe recently detected odd sounds coming from Jupiter, which NASA describes as a bow shock. “The bow shock is analogous to a sonic boom,” researcher William Kurth of the University of Iowa in Iowa City, said in a NASA news release. “The solar wind blows past all the planets at a speed of about a million miles per hour, and where it hits an obstacle, there’s all this turbulence.” During its mission, Juno will make 37 “close approaches” to Jupiter, and each one could imperil the craft. For example, under the clouds, there is a layer of hydrogen under so much pressure that it conducts electricity. That, along with the planet’s fast rotation [one day on Jupiter is only 10 hours long], creates a strong magnetic field, creating what NASA calls the “harshest radiation environment in the solar system.”

Juno is fitted with “radiation-hardened electrical wiring and shielding” as well as a unique titanium vault that protects the probe’s most vital equipment, such as the flight computer. The vault is so strong that it will reduce radiation exposure by 800 times. Without it, “Juno's electronic brain would more than likely fry before the end of the very first flyby of the planet.” To further mitigate the exposure, Juno’s orbit around the planet will be unusual, as described in the video below.

Even more cool -- the most stunning thing that human eyes have ever seen:

I wonder what it looked like to the people on Jupiter?
OP

You really think that people live on Jupiter??

You really think that people live on Jupiter??

...dat laser light show."
You must log in or register to reply here.

Looks like I am forced to get the vaccine.

Trumpery was rejected, but continues to ravage the GOP
2 3