How Dangerous Is Peter Thiel?...In a recent speech, the tech billionaire gave us a frightening look at his worldview. 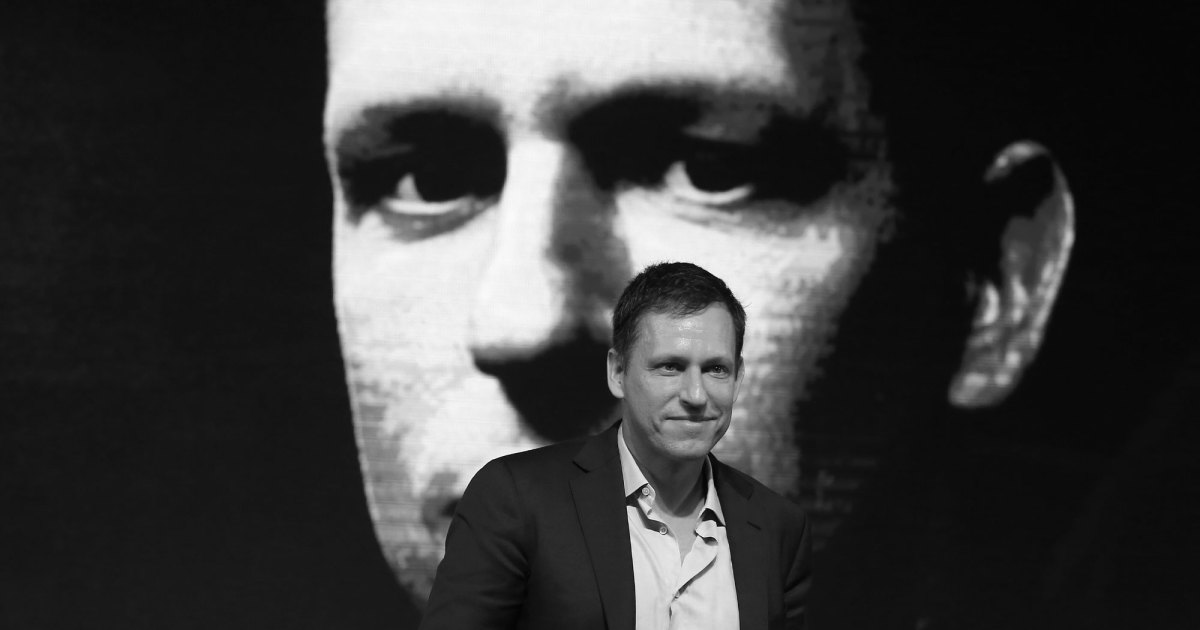 It's Motherfucker Jones. Most likely, the article is complete bullshit, and there probably is no speech in which this Peter Thiel (whoever the fuck he is supposed to be) ever said anything at all like what they are trying to attribute to him.
The five great lies of the Left Wrong:

We can be Godless and free. • “Social justice” through forced redistribution of wealth. • Silencing religious opinions counts as “diversity”. • Freedom without moral and personal responsibility. • Civilization can survive the intentional undermining of the family.​
OP

Bob Blaylock said:
It's Motherfucker Jones. Most likely, the article is complete bullshit, and there probably is no speech in which this Peter Thiel (whoever the fuck he is supposed to be) ever said anything at all like what they are trying to attribute to him.
Click to expand...

Peter Thiel is a MASTER OF THE UNIVERSE and future president of the United States. it's your failing that you don't know who he is
OP

Editor’s note: This essay from David Corn first appeared in his new newsletter, This Land. Given the importance of covering big money in politics and the move toward authoritarianism on the right, we want to make sure as many readers as possible have a chance to see it.

New York Times columnist David Brooks recently got scared. Last month, he attended the National Conservatism Conference, held in an Orlando hotel, and reported in the Atlantic that this confab demonstrated that the right—of which he used to be a high official in good standing—has become a cauldron of End-Times paranoia posing as populism. The animating theme of this shindig did not arise from policy prescriptions or principles for contending with the nation’s economic or social welfare challenges or for pursuing a foreign policy in this confusing century. It was the notion that conservatives face eradication at the hands of diabolical leftists. As Brooks writes, “The idea that the left controls absolutely everything—from your smartphone to the money supply to your third grader’s curriculum—explains the apocalyptic tone that was the dominating emotional register of this conference.”

And the politicians there helped turn the event into a demagogic orgy. Sen. Josh Hawley (R-Mo.) barked, “The left’s ambition is to create a world beyond belonging. Their grand ambition is to deconstruct the United States of America.” Sen. Ted Cruz (R-Texas) hissed, “The left’s attack is on America. The left hates America. It is the left that is trying to use culture as a tool to destroy America.” Sen. Marco Rubio (R-Fla.) growled, “We are confronted now by a systematic effort to dismantle our society, our traditions, our economy, and our way of life.” This is what the right used to say about the Reds under our beds.

With COVID in mind, Thiel observed that science “has become massively on the side of dogmatism, not enough skepticism…You see this with all the genuflections to science with a capital S.” His evidence? Here it was: “Masks first ineffective, then required.” That is, at the start of the pandemic public health experts did not advise mask-wearing, yet then they did. Of course, that switch occurred as more data came in on this new disease. Yet Thiel found this suspicious or capricious. Ditto, he said, regarding the shift in attitude toward the theory that the coronavirus originated in a Wuhan lab, a theory initially widely dismissed. “Now it’s probably correct,” he said. Uh, probably not. Thiel was billing himself as a brave dogma-buster, but he was pushing his own dogma.

On Afghanistan, he mentioned the chaotic withdrawal and argued that the true problem was that, for 20 years, no dissent to the policy was permitted. He had a point in that Democratic and Republican administrations lied to the public and pushed a consensus divorced from ground truth. (I recently explained this.) But there were plenty of attempts to challenge the dogma along the way. Presidents just ignored them. And Thiel demonstrated that he himself was more interested in promoting a political talking point than a thoughtful examination of a vexing policy matter when he held up a specific example of “a dissenting individual voice [on Afghanistan] that articulated the alternative in very clear terms”: Donald Trump. What did Trump do to challenge the conventional wisdom on Afghanistan? Thiel explained: “He said that Afghanistan was fundamentally and irreducibly a ‘shithole’ country.” Damn, that really changed things, right? And when Trump made this remark, he was mainly referring to Haiti and African nations in regard to US immigration policies. This was not an instance of Trump calling BS on the years of false assertions and faulty assumptions that led to the messy withdrawal in Afghanistan. It was Trump dumping on dark-skinned immigrants.
Last edited: Nov 26, 2021
OP

The tech billionaires don't like him because he is calling out their authoritarianism.

Not a very eloquent speaker, but I don't really see what got the commie panties at MJ in a twist.

.
We sleep peacefully in our beds at night because rough men are willing to do violence on our behalf.

OKTexas said:
Not a very eloquent speaker, but I don't really see what got the commie panties at MJ in a twist.

Still seeing commies under every bed?
AZOG the defiler is a piece of shit who changed my post in violation of the rules:

"Jews don't whine?????? Jews INVENTED whining. Admittedly, you've been treated like shit throughout history, and if this is what it means to be "God's chosen people", I'm grateful I was born Christian",

He changed it to : "Jews INVENTED whining...I am grateful I was born a Christian" - Dragonlady" THE RULES SAY HE CAN'T DO THIS.

.
We sleep peacefully in our beds at night because rough men are willing to do violence on our behalf.

The Elephant In The Room

What have Democrats done for America?

In Defense of “Misinformation”

Why Has America Fallen So Quickly?
2 3

The Scars of Christ
2