That cockamamie lie about the video didn't hold water for a second. It was obvious she lied from the beginning.

From the very first moments of the terrorist attack on the U.S. compound in Benghazi on September 11, 2012, then-Secretary of State Hillary Clinton and her top aides were advised that the compound was under a terrorist attack. In fact, less than two hours into the attack, they were told that the al-Qaeda affiliate in Libya, Ansar al-Sharia, had claimed responsibility.........

...........The revelations in the newly released e-mails were unveiled by Judicial Watch this afternoon at a press conference in Washington. In a press statement, Judicial Watch president Tom Fitton asserted that the e-mails left “no doubt that Hillary Clinton’s closest advisers knew the truth about the Benghazi attack from almost the moment it happened.” Mr. Fitton further opined that “it is inescapable that Secretary of State Hillary Clinton knowingly lied when she planted the false story about ‘inflammatory material being posted on the Internet.’ The contempt for the public’s right to know is evidenced not only in these documents but also in the fact that we had to file a lawsuit in federal court to obtain them.”

The video lie may have sounded plausible to her depending on how drunk she was the night of September 11th but pretty embarrassing once she sobered up on September 12th.

She won't be able to shake these released emails. She and her minions will only be able to deflect, lie and site the fake war on women. And she'll still be toast. 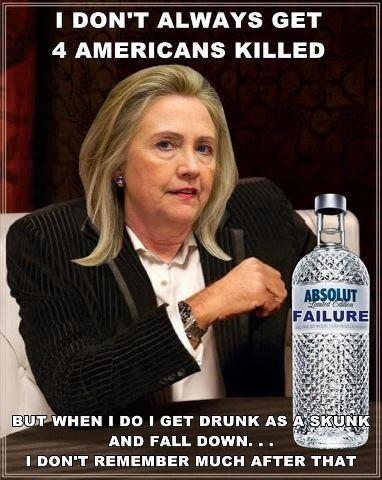 The Fluffers will line up to defend her
OP

CrusaderFrank said:
The Fluffers will line up to defend her
Click to expand...

True but now the emails are out there for everyone to see. The lie is fully exposed. Any defense will stretch credibility past the believable point. It will be a source of morbid ridicule for opponents and embarrassment for supporters.

Lerner seen getting fitted for an orange jump suit