Not everyone knows it but we have a lot to do with all that lovely Heroine that comes into the Country. Sheep don't want to face the fact their loving idols Obama, Clinton, and Bush included have helped bring those drugs into this Country . Our own soldiers have guarded the poppy fields.

Now Trump is going to be fed bs information , false information by his advisers who will lead him down the wrong path. Kind of like in the tv series " 24 hours".
“The Revolution won’t happen with guns, rather it will happen incrementally, year by year, generation by generation. We will gradually infiltrate their educational institutions and their political offices, transforming them slowly into Marxist entities as we move towards universal egalitarianism.” – Max Horkheimer
W

US Launches Airstrikes in First Operation Targeting Afghan Opium
20 Nov.`17 - The United States has launched its first counter-narcotics military offensive in partnership with local allies in Afghanistan to try to deprive the resurgent Taliban of its largest source of funding. The move follows years of criticism that international forces are not doing enough to curb the opium trade.

Speaking in Kabul Monday, General John Nicholson, commander of U.S. troops and NATO's Resolute Support military mission, shared details of the coalition's first overnight counter-narcotics airstrikes. He said the bombing campaign destroyed major Taliban narcotics production facilities in Helmand, the main poppy producing southern Afghan province, depriving the insurgent group of major revenues. "We hit the labs where they turn poppy into heroin. We hit their storage facilities where they keep their final product, where they stockpile their money and their command and control. Our estimates indicate that more than $200 million from this illegal economy was going into the pockets of the Taliban," the general noted.

He said the strikes are not hitting Afghan farmers and are being conducted carefully to limit the amount of collateral damage and avoid civilian casualties. "We will continue attacking these drug trafficking organizations who are supporting the Taliban and other terrorist organizations," Nicholson said. Afghan Chief of Army Staff General Sharif Yaftali welcomed the move against the Taliban, which he called 'a criminal group' benefiting from the narcotics business. The United Nations announced last week that narcotics production nearly doubled this year in Afghanistan to around 9,000 metric tons, showing a nearly 90 percent increase compared with 2016. Critics have long blamed the booming Afghan narcotics industry for being a major cause of prolonged hostilities and deteriorating security conditions in the country. The U.S. military estimates income generated from the illicit drugs is providing 60 percent of funds for the Taliban insurgency.

Nicholson said he has been given new authorities under the Trump adminstration's South Asia policy that allowed him to declare war on Afghan drugs and go after the enemy and all of their support, as well as revenue infrastructure across the country. "Narcotics revenue represents the largest single source of funding for the Taliban and as we know the Taliban are making more money than they need to fight their campaign. So, this money is going into the pockets of Taliban leaders who are living safely outside of the country," he said. Under the new policy President Donald Trump unveiled in August, about 3,000 additional American troops have arrived in Afghanistan. The U.S. military has increased airstrikes against the Taliban as well as terrorists linked to the Afghan branch of Islamic State. 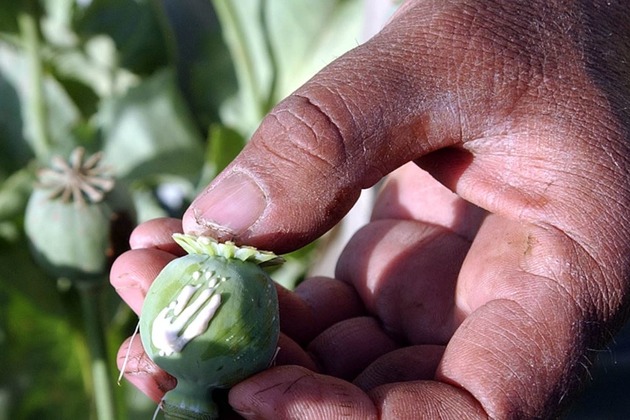 Afghan farmers collect raw opium as they work in a poppy field in Chaparhar district of Jalalabad, east of Kabul.​
The anti-narcotics operation and stepped up battlefield attacks are aimed at pressuring and compelling the Taliban to join an Afghan reconciliation process, said Nicholson. The new policy, he said, also focuses on going after the havens or sanctuaries the Taliban and its allies enjoy outside of Afghanistan. U.S. and Afghan military commanders have long alleged neighboring Pakistan is sheltering the insurgents and not taking action against them despite public pledges. "We have had numerous high-level engagements between the United States and Pakistan so that we can get Pakistan to work with us in eliminating these safe havens of the enemy. This is extremely important going forward," said Nicholson. For their part, authorities in Pakistan deny the existence of any insurgent sanctuaries on its soil. They have called on Washington to share "actionable evidence" with Islamabad to enable Pakistani forces to go after any suspected militant hideouts on their side of the border.

US Hits Taliban Drug Labs in Afghanistan in New Strategy
20 Nov.`17 - American aircraft have targeted drug producing facilities in Afghanistan for the first time under a new strategy aimed at cutting off Taliban funding, the top U.S. general in the country said Monday.

Gen. John Nicholson said the raids, involving an F-22 bomber, were carried out Sunday in the southern Helmand province, as part of the strategy unveiled by President Donald Trump in August. Nicholson said the insurgents generate an estimated $200 million a year from poppy cultivation and opium production. In a news conference with the Afghan army chief of staff, Nicholson said the Taliban were becoming a criminal organization. 'They fight so that they can keep profiting from narcotics trade and other criminal activities,' he said. 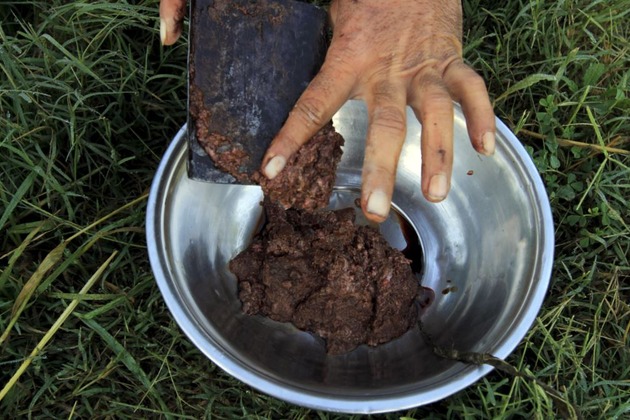 Afghanistan's opium production has nearly doubled this year compared to 2016, while areas that are under poppy cultivation rose by 63 percent, according to a joint survey released last week by the United Nations and the Afghan government. Production stands at a record level of 9,000 metric tons (9,921 U.S. tons) so far in 2017, with some 328,000 hectares (810,488 acres) under cultivation, according to the survey, carried out by the Counter-Narcotics Ministry and the U.N. Office on Drugs and Crime.

Afghanistan is the world's top cultivator of the poppy, from which opium and heroin are produced. The Taliban prohibited poppy cultivation when they governed the country in the late 1990s, but have since come to rely on it as they wage an increasingly potent insurgency against the government and its foreign backers. The Taliban have seized several districts across the country and have carried out a series of major attacks, mainly targeting Afghan security forces, since U.S. and NATO forces officially shifted to a support and counterterrorism role at the end of 2014.

US Hits Taliban Drug Labs in Afghanistan in New Strategy
Click to expand...

When will the American stupid learn......Get out means, get out!!

How will the U.S. deal with Iran?

Wasnt it last month that reportedly 1000s of Haitians were crossing our southern border? Boy, you all need to watch your butts, because of Biden.

The United States has regained respect.
2 3 4