Somalia, Central African Republic, Nigeria, and The Democratic Republic of Congo.all embroiled in revolutions and Islamic jihad. And France went into Mali before enterig the Congo to liberate large swaths of the country from jihadists. The violence spreads from the Middle east to Africa as well as Southeast Asia. And then, Mother Jones gives us a map of US involvement in Africa @ The Startling Size of US Military Operations in Africa | Mother Jones with this map:

Where is all this going?
W

U.N. Peacekeepers to be sent in to C.A.R. due to sectarian civil war...

UN Peacekeepers to Deploy in CAR
September 14, 2014 — A United Nations peacekeeping force will deploy Monday in the Central African Republic, which has been devastated by more than two years of sectarian violence and civil war. Many hope the U.N. troops will have a strong impact on economic development of this poor nation.

The Security Council authorized the force, known as MINUSCA, to take all necessary means to carry out its mandate in the CAR. For many in Bangui this means that the U.N. troops will not hesitate to use force against armed groups. CAR government spokesperson Gaston Mackouzangba says the arrival of well-equipped U.N. troops will be a deterrent for armed groups. “When you have 12,000 armed people, with better equipment than that of the CAR, that should be enough dissuade,” says Mackouzangba.

University of Bangui rector Gustave Bobossi-Séréngbé says economic development in the country took a big hit in recent years. He says beyond the restoration of security and peace, the U.N. troops will have a big impact on local development. “There are no roads, there is no communication, school almost equates to zero. So everything is at level zero. And we are going to have almost 10,000 people with all kind of expertise coming in,” says Bobossi-Séréngbé. 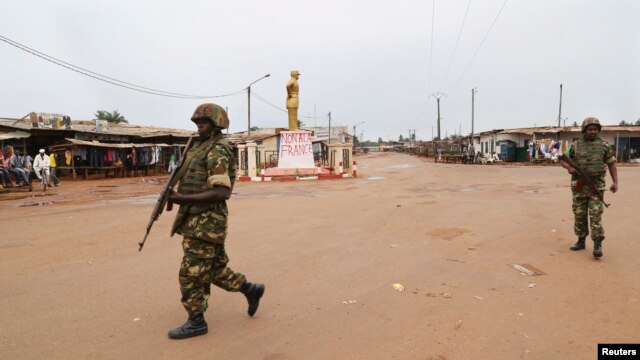 Burundian peacekeepers are seen patrolling a neighborhood in Bangui, capital of the Central African Republic

Many leaders of the armed groups also say they welcome the U.N. troops. Movement of Central African Liberators for Justice leader Abakar Sabone, a member of the former Seleka coalition, says the U.N. troops are welcome because they will help bring peace. "They have the support of the people of CAR,” he adds. According to U.N. officials, only 7,500 of the approximately 12,000 men expected will deploy Monday. Most of the 6,000 African Union troops already in the CAR will join the new U.N. mission.

Doctors Without Borders (Medecins Sans Frontieres) Deputy Head of Mission in the CAR, Claude Cafardy, says he does not expect much will change. “It seems that forces will look different. But right now, we are not confident [in] their efficiency in the coming months in CAR," says Cafardy, adding that U.N. troops should expect resistance. “We have been noticing that although things are improving in Bangui in terms of security, it is not the case in the rest of the country,” says Cafardy.

Professor Bobossi-Séréngbé also thinks armed groups will resist. “There will be some resistance, but it will diminish over time. We have to convince them, they are citizens of CAR, and a civil war has already proven its limits," says Bobossi-Séréngbé. In addition to the AU soldiers in the country for the past nine months, new troops from Pakistan, Bangladesh and Indonesia have recently arrived. According to the United Nations, a 400 member U.N. police force will be deployed in the coming weeks in Bangui.

UN Peacekeepers to Deploy in CAR
Click to expand...

There is no revolution in the DRC, and certainly no jihad. There aren't enough Muslims for anyone to notice them!
W

Instead, it drew fury on social media this week for its portrayal of CAR and the sources interviewed. Sarah Knuckey, a professor at Columbia University's law school and the co-director of the university's Human Rights Institute, called it "shallow" and "reckless" in its reporting. The piece, "Conflict Is More Profitable Than Peace," written by New York Times columnist Nicholas Kristof, was published in the Times on March 25. A two-time Pulitzer winner, Kristof explains why years of violence and conflict in the CAR have created major barriers to alleviating poverty, hunger and preventable disease. Kristof argues that international donors, including the U.S. government, should amp up investments in security efforts like the U.N. peacekeeper budget — not just humanitarian aid.

The story was part of Kristof's annual "Win A Trip" contest, where he takes a promising student journalist on a reporting trip to highlight under-covered global development issues. Kristof chose the CAR because it is indeed a country in crisis. It ranks 188 out of 188 in the Human Development Index, which measures such data as life expectancy, education and per capita income. As for the story's intent, in an interview with NPR on Thursday, Kristof said, "I was writing a piece about global conflict as an impediment to development and health care. I was using CAR as an example of that. South Sudan would have been as good an example." Within hours of publication, Kristof's column was slammed in a tweetstorm on Twitter by Knuckey, who has visited the CAR in her research on human rights crimes. Her tweets ignited a conversation across the global humanitarian community. 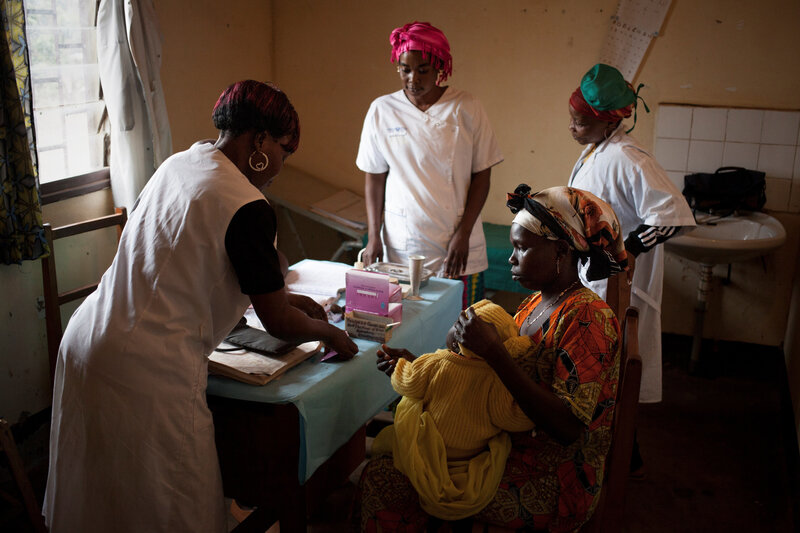 The Central African Republic has one of the world's highest neonatal mortality rates: 1 in 24, according to UNICEF. Above: A mother holds her child during a consultation on February 14 at the maternity clinic in the town of Boali.​
A few thoughts on this @NickKristof piece on the Central African Republic 1/n Nicholas Kristof on Twitter
— Sarah Knuckey (@SarahKnuckey) March 25, 2018

There is little recognition of the agency and work of the countless Central Africans who run NGOs, provide healthcare, work for peace, prosecute crimes, risk their lives to protect others 11/n
— Sarah Knuckey (@SarahKnuckey) March 25, 2018

He tells his readers that death results from “chaos and dysfunction,” and fails to grapple with the complexities of the conflict, the harms of colonization, the systems & structures leading to poverty 17/n
— Sarah Knuckey (@SarahKnuckey) March 25, 2018

"Kristof represented CAR as if it were miserable across the board, and that the people who live there are victims," Knuckey told NPR. "It represents a brand of journalism that has been heavily criticized for decades, and that is harmful." Kristof himself says he was a "little bit" surprised by the reaction on social media but "understands the frustration that people have with the lack of coverage about things they care deeply about," referring to researchers, academics and aid workers who work to improve conditions in the CAR. For Moussa Abdoulaye, a Central African activist, founder of a community school and consultant for media companies like Al Jazeera, VICE and HBO, perhaps the worst offense was Kristof's depiction of his country as a hopeless place. Kristof described the CAR as "the world's most wretched country," "the capital of human misery" and home to "the world's most neglected crisis."

President Trump vows to end radical left-wing indoctrination and anti-American sentiment in educational system. He is creating the "1776 Commission".
3 4 5

Great musicians who can sing and play an instrument at the same time.
2 3