by James Fenton, jfenton@daily-times.com
FARMINGTON – A group of oil and gas executives and energy policy experts from the Texas Panhandle and New Mexico's piece of the Permian Basin are pushing a plan to restrict seafaring imports of foreign oil from coming into the U.S. in order to stabilize the oil and gas industry and bring back lost oilfield jobs.

The group's plan, which would exempt crude oil imported from Mexico and Canada, is an effort to push back against the price wars the group said are being waged by OPEC, or the Organization of the Petroleum Exporting Countries, led by Saudi Arabia.

Members met at the School of Energy at San Juan College Tuesday to promote the "Panhandle Import Reduction Initiative," which they say could be implemented in multiple phases within 90 days of the next administration, with the ultimate goal of reducing heavy crude oil imports to about 10 percent of demand. 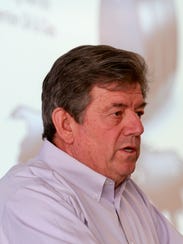 "We find ourselves ... in a situation now where we're down about 6,000 jobs, most of those in the oil and gas industry," Taylor said of the San Juan Basin. "We have about 11,000 people who have left (San Juan County) ... So while we're down 6,000 jobs and down 11,000 people, we've built seven fast-food restaurants, three more under construction, and two big box stores. It's a different world out there.

"But the fact of the matter is that the economic base of the community is in trouble. And not only is the community in trouble, but the state of New Mexico is in trouble, and not only is New Mexico in trouble but our nation and its security. It's all tied together. It's a very difficult situation we find ourselves in when we have one country that can control oil prices. It goes beyond free trade. It's a problem we need a solution to. We are at the dependence of foreign oil."

Taylor said about a third of New Mexico's general fund comes from the oil and gas industry in the form of taxes and fees.

The pro-quota group argued for limiting American dependence on foreign oil using a method adopted by former President Dwight Eisenhower who pushed through a quota system to reduce sea-bound foreign oil coming to U.S. shores in the early 1950s..
You must log in or register to reply here.

Is There a Bottom in the Energy Market?

Science has failed the sun only until now.

Heads Up Lefties; You Do NOT Want a Civil War
2 3

Can someone please explain to me the lefts obsession with masks?