Csa Vice President Alexander Stevens had this to say 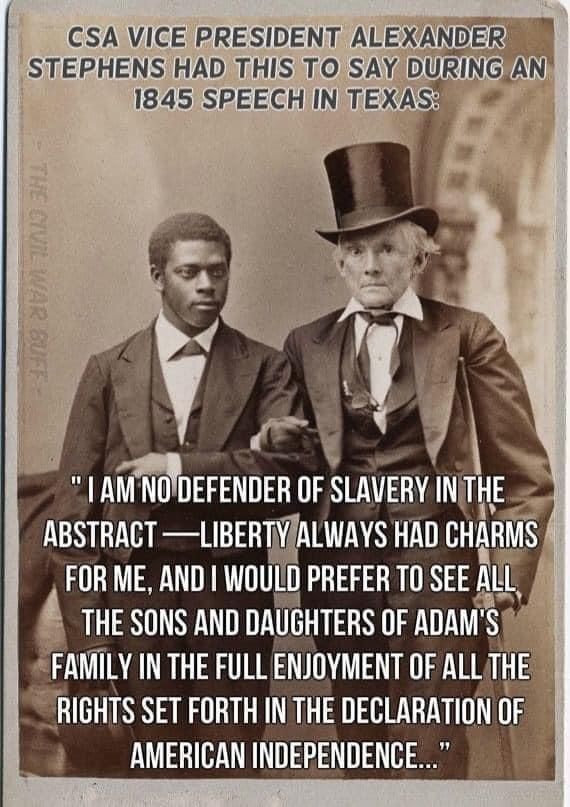 When they tell you that the cornerstone of the Confederacy was slavery.

But let's go there for just a minute with some logic from a Confederate soldier:

And if the men of the South are reproached for denying liberty to three and a half millions of human beings, at the same time that they professed to be waging a great war for their own liberty, what are we to say of the revolting colonies of 1776, who rebelled against the British crown to achieve their liberty, while slavery existed in every one of the thirteen colonies unrepudiated?

Cannot these historians who deny that the South fought for liberty, because they held the blacks in bondage, see, that upon the same principle they must impugn the sincerity of the signers of the Declaration of Independence? For while, in that famous instrument, they affirmed before the world that all men were created free and equal, and that "governments derive their just powers from the consent of the governed," they took no steps whatever to free the slaves which were held in every one of the thirteen colonies.

We ask the candid historian then to answer this question: If the colonists of 1776 were freemen fighting for liberty, though holding men in slavery in every one of the thirteen colonies, why is the tribute of patriotism denied to the Southern men of 1861 because they too held men in bondage?

If George Washington, a slave-holder, was yet a champion of liberty, how can that title be denied to Robert E. Lee?

Slavery was not abolished in the British dominions until the year 1833. Will any man dare to say there were no champions of human liberty in England before that time?

But after all that may be said, we are told that slavery was the cause of the war, and that the citizen soldiers of the South sprang to arms in defence of slavery.

Yes, my comrades, History, or rather let us say Calumny, masquerading as History, has told the world that that battle-flag of yours was the emblem of slave power, and that you fought, not for liberty, but for the right to hold your fellowmen in bondage.

Think of it, soldiers of the Southern Cross! Think of it, followers of Lee and Jackson and Albert Sidney Johnston! You were fighting, they say, for the privilege of holding your fellowmen in bondage! Will you for one moment acknowledge the truth of that indictment? Ah, no! that banner of the Southern Cross was studded with the stars of God's heaven, like Old Glory itself. You could not have followed a banner that was not the banner of liberty! You sprang from the loins of freemen! You drank in freedom with your mother's milk! Your revolutionary sires were not inspired by a more intense devotion to liberty than you were!

Tell me, were you thinking of your slaves when you cast all in the balance, your lives, your fortunes, your sacred honor, in order to endure the hardships of the march, and the camp, and the peril and the suffering of the battle field? Why, it was but a small minority of the men who fought in the Southern armies--hardly one in ten--that were financially interested in the institution of slavery.

There is, however, a court to which this contention may be referred for settlement--one whose decision all men ought to accept. It is composed of the three men who may be supposed to have known, if any men knew, the object for which the war was waged,--Abraham Lincoln, Jefferson Davis, and Robert E. Lee. And their decision is unanimous. Mr. Lincoln always declared that the object of the war was the restoration of the Union, and not the emancipation of the slaves. Mr. Davis as positively declared that the South was not fighting for slavery, but for independence. And Robert E. Lee expressed his opinion by setting all his slaves free Jan. 8, 1863, and then going on with the war for more than two years longer.

I will only add that if the North waged the war not for the Union but for the slave, then it is remarkable that Mr. Lincoln and his advisers never found out that fact. And as to the South--if, indeed, she fought not for liberty but for her property in slaves--it is still more remarkable that Jefferson Davis should have embarked on the enterprise of Secession, believing that he would as a consequence lose his slaves, for in February, 1861, he wrote to his wife in these words, "In any case our slave property will eventually be lost;" and that General Lee should have emancipated every one of his slaves more than two years before the close of the war. Thus the political head of the Confederacy entered on the war foreseeing the eventual loss of his slaves, and the military head of the Confederacy actually set his slaves free before the war was half over; yet both, they say, were fighting for slavery!

docsouth.unc.edu
You must log in or register to reply here.

The curfew tolls the knell of parting day,

The Gettysburg Address: What The Fuck?
2

Why a British guy keeps coming here and telling US we have racial problems, when he needs to address his own countries slavery..

No, slavery was not the reason for the 2nd Amendment, they even have to lie about this...facts don't support anything they believe.
2 3

Why Fauci is a failure
2

Rather than get Covid vaccine, CNY basketball coach quits job, moves to Florida