"The root difference between the Conservatives and the Liberals of today is that Conservatives take account of the whole man, while Liberals tend to look only at the material side of man's nature" (Goldwater, "The conscience of a conservative", 1960, p.10).

That Goldwater citation is spot on. Among Leftists it is commonly believed that "self enrichment" is equal to egoism. But the main reason why people take responsibility for their own lives and try to create a secure economical basis is not to become an encumberment to others. Family members and others in society shouldn't need to fend for "me". After all, they have enough problems already. So it has much to do with care for other people.

The typical ambitious person who develops a business and builds wealth does not do this out of egoistic motives. More important incentives are personal pride and a feeling of responsibility for the community. I suppose, Ayn Rand's philosophy of egoism has done much to denigrate human nature in the eyes of people.

At this moment a male blackbird came flying up to the balcony, at which she spat out the peanut and flied away screaming to a nearby fir tree. The male blackbird immediately understood the situation. He had not intended to defend the feeding place. He simply didn't know that she was there. So he flew after her and seated himself on a nearby branch where he was facing away from her, while also turning his head to look at her. In this way he signalled non-aggression. Thus he sat for several minutes until she had calmed down. She understood the signal and returned to the balcony to eat peanuts, this time not even slightly nervous. The male blackbird remained perched on his branch, but had now turned around, facing my balcony.

Blackbirds are not egoists, but are entirely empathic. The fact that they have to take responsibility for their own lives is merely the law of nature. It would surprise me very much if human nature is worse in this respect. We have a natural inclination, just like the blackbirds, to take responsibility for our fellow beings. It is merely a matter of showing compassion when it suits the occasion. But to build a socialist machine-society where each and everybody is thoroughly cared for by the state is contrary to nature, and it also passivates the empathic function.

As a Goldwater conservative and a resident of the state of arizona as I thank you and welcome you to usmb! 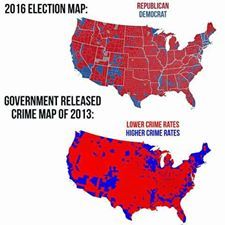 USMB.... The North Korea of the net!
All mods are North Korean approved and Sharia complianced
You must log in or register to reply here.

A moment ago
HeyNorm
H

Real people who were there dispute Biden admin claims Chinese balloons flew over US under Trump.
4 5 6

A moment ago
mak2
M

Day 785 of the COVID "Vaccines": Another Healthy 21-Year-Old Dies Suddenly In His Sleep. Autopsies Have Proved Direct Causation.
2