Some would have you believe the UK with it's massive gun control is a safe place.
That is FAR from true.
In fact, The UK suffers 2034 violent crimes per 100,000 vs 466 for the US.
A false argument is made that knife and beating deaths are somehow preferable to gun deaths. Sry, dead is dead.

Hoplophobes never acknowledge the tens of thousands of lives SAVED each year because of gun ownership.

In this video, Britons warn Americans that they are being far too soft on the gun control crowd.
I agree. California and NewYork have for all intents and purposes become Gun Free Zones. The 2nd has been abolished there for all intents.
VERY FEW people rise up and contest that. And so it rides, and more states see their success and are going for the same.

Unfortunately, too many Americans falsely believe that owning a firearm is all that is required.
That they could never be taken. They only say this because so far, no one has tried. That day is on the horizon. 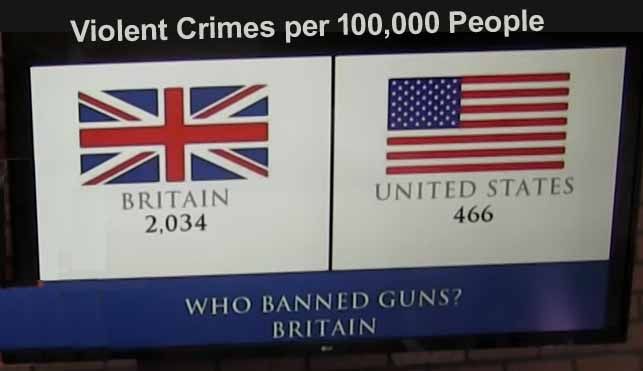 Tommy taint licker and ozlandman will have something to say about this, maybe frogger too.

Shawnee_b said:
Tommy taint licker and ozlandman will have something to say about this, maybe frogger too.
Click to expand...

They better shut their fucking assholes or we may decide to beat the shit out of GB a third time.

A country that has no Bill of Rights warns the U.S. about the 2nd Amendment? What is seldom considered in the 2nd Amendment argument is that the mere brandishing of a firearm is estimated to save thousands of lives and property each year even though a shot is not fired and many incidents go unreported.
You must log in or register to reply here.

Tucson Trump rally: One mile long line of people wait in the heat to see Trump!
2

With just days to go in the campaign, Trump is whining about toilets
2

Trump Letter to the Debate Commission
2 3 4