I am planning a trip to DC for Trump's Inauguration with my wife and kids and was wondering if ANYONE had done this before? I am looking for tips etc. I have read hotels are expensive and limited and parking is limited as well. I am curious where should we park and how do we get into DC then? We have no problem standing on the parade route and a hotel we will probably get one in Virginia somewhere more than likely.
W

Trump election: Who will dress America's new first family?
Fri, 18 Nov 2016 - None of America's big designers have so far offered to dress the next President and First Lady.

Finding the right outfit for the big day can be a challenge and there are few days bigger than a US presidential inauguration. But America's biggest designers have been strangely reticent about bringing their best frocks and suits to Trump Tower. Indeed, some have been positively resistant. None more vocally than Sophie Theallet, a designer whose work has benefited from her association with Michelle Obama over the last eight years. 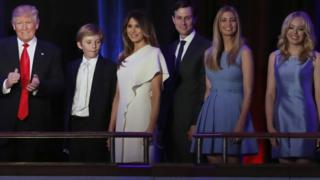 The Trump family on stage at Donald's victory speech​
Her open letter to her fellow designers, where she declares that she "will not participate in dressing or associating with the next First Lady", has become a lightning rod for an industry that vocally supported Hillary Clinton during the election. The New York Times Fashion Director, Vanessa Friedman, has ventured that Clinton's defeat and the arrival of the Trump family marks "possibly the end of fashion's seat at the power table."

During the campaign much was made of Mrs Clinton's relationship with Ralph Lauren, a brand built on a vision of US heritage that harks back to a time when America was great. Whereas the designer was apparently comfortable being associated with Mrs Clinton's trouser suit obsession, the jumpsuit Mrs Trump wore on election night was was bought off the rack, according to the brand. Michelle Obama has been a strong supporter of domestic designers and brands during her eight years as First Lady, mixing high fashion (Jason Wu, Maria Pinto) with High Street (J Crew, Target) to promote the industry and the values of Made in America.

Her choice of outfits gained her a reputation as a consummate diplomatic dresser and saw designers willing to offer up their finery to her. Given the prestige associated with dressing the First Lady, it is notable that Mrs Trump has bought many of her most notable outfits at retail and has been associated with European designers so far - think of the infamous Gucci (Italy) pussycat bow blouse from the debates, or the Roksanda Ilinic (Serbia via UK) dress she wore for her Republican convention speech.

Designer Who Dressed Michelle Obama Refuses to Dress Melania Trump
November 18, 2016 | A fashion designer who dressed first lady Michelle Obama said Thursday that she refuses to dress the incoming first lady Melania Trump because of the “rhetoric of racism, sexism, and xenophobia unleashed by her husband’s presidential campaign,” the Huffington Post reported Friday.

In an open letter posted on her Twitter page, Sophie Theallet wrote: “The Sophie Theallet brand stands against all discrimination and prejudice. Our runway shows, ad campaigns, and celebrity dressing have always been a celebration of diversity and a reflection of the world we live in. Theallet said that while “it is not wise to get involved in politics” since her company is “family owned,” her “bottom line is not just about money.” “We value our artistic freedom and always humbly seek to contribute to a more humane, conscious and ethical way to create in this world,” Theallet wrote. “As an immigrant myself in this country, I have been blessed with the opportunity to pursue my dreams in the USA. Dressing the First Lady Michelle Obama for the past 8 years has been a highlight and an honor. She has contributed to having our name recognized and respected worldwide,” Theallet wrote.

Mrs. Obama’s “values, actions and grace have always resonated deeply within me,” Theallet added. “As one who celebrates and strives for diversity, individual freedom and respect for all lifestyles, I will not participate in dressing or associating in any way with the next First Lady. The rhetoric of racism, sexism, and xenophobia unleashed by her husband’s presidential campaign are incompatible with the shared values we live by,” Theallet wrote. “I encourage my fellow designers to do the same,” she added. “Integrity is our only true currency.”

Odium said:
I am planning a trip to DC for Trump's Inauguration with my wife and kids and was wondering if ANYONE had done this before? I am looking for tips etc. I have read hotels are expensive and limited and parking is limited as well. I am curious where should we park and how do we get into DC then? We have no problem standing on the parade route and a hotel we will probably get one in Virginia somewhere more than likely.
Click to expand...

DC has a good metro system. You don't want to drive there.

Metro - Home page
You must log in or register to reply here.

America has expressed its 'right'.

S
'CRIME OF THE CENTURY!' Trump issues furious statements lashing out at Pence and Mitch McConnell for his election loss
17 18 19

What is the most gutsy thing that you have ever done?
2

the Congressional Progressive Caucus has 100 members. what if they all ran for Senate? that's the kind of political revolution we need, my friends