The Basilians didn’t just happen by the Vatican and drop in on Pope Francis. Five Basilian priests were in Rome at the culmination of a bicentennial pilgrimage through France, ending in Rome. All this year Basilians in Canada, the United States, Mexico and Colombia have been celebrating their 200th anniversary — celebrations that will be capped off with a 200th birthday Mass at St. Basil’s Church, on the campus of the University of St. Michael’s College at the University of Toronto Nov. 21.

On their bicentennial pilgrimage, Storey, Fr. Laejandro Estrada, Fr. Pedro Mora, Fr. Morgan Rice and Fr. John Huber celebrated Masses at the College Sacré Coeur in Annonay and at the 13th-century chapel of St. Basile more than 500 km south of Paris. After meeting with Francis, the Basilians celebrated a Mass of thanksgiving in St. Peter’s Basilica, where they read out the names of every novice, priest, lay associate and Basilian in formation for priesthood.

Basilian history didn’t just start with a few teaching priests holed up in rural France. The Basilians risked their lives, refusing to bend to a Napoleonic conception of the French Church as somehow separate from the pope. They were papists from the beginning.

“Ordinarily, to say you’re a papist and a Catholic would be ridiculous,” said Storey. “But today it becomes politically charged.”

The Basilians are papists, they know who they are and they’re happy with who they are, said the Canadian leader of the order. 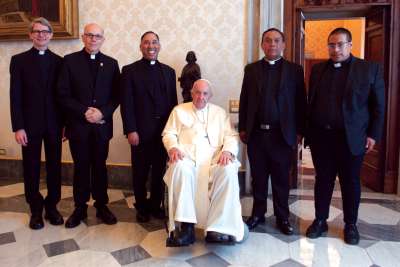 The Basilian Fathers are praying for the Pope’s knee — not just because Pope Francis’ trip to Canada next month hangs in the balance and not merely because they are papists, loyal to His Holiness and the magisterium. The Pope personally asked the Basilians to pray for his knee. In a sort of ex...

That's kind of cool. I wonder if there will be other articles written about them.
If your path demands you to walk through hell, walk as if you own the place.
You must log in or register to reply here.

Rome catacombs with newly restored frescoes to reopen to public.

One Last Defense of Harry Potter

Why Does The Vatican Protect This Bastard?

A Raid Now Isn't A Raid

A moment ago
Hellbilly

*We As A Nation, Are No Better Than Venezuela*
2 3