What are you reading?

Currently, The Lost City of Z: A Tale of Deadly Obsession in the Amazon by David Grann

In 1925, renowned British explorer Col. Percy Harrison Fawcett embarked on a much publicized search to find the city of Z, site of an ancient Amazonian civilization that may or may not have existed. Fawcett, along with his grown son Jack, never returned, but that didn't stop countless others, including actors, college professors and well-funded explorers from venturing into the jungle to find Fawcett or the city. Among the wannabe explorers is Grann, a staff writer for the New Yorker, who has bad eyes and a worse sense of direction. He became interested in Fawcett while researching another story, eventually venturing into the Amazon to satisfy his all-consuming curiosity about the explorer and his fatal mission. Largely about Fawcett, the book examines the stranglehold of passion as Grann's vigorous research mirrors Fawcett's obsession with uncovering the mysteries of the jungle. By interweaving the great story of Fawcett with his own investigative escapades in South America and Britain, Grann provides an in-depth, captivating character study that has the relentless energy of a classic adventure tale.
Click to expand...

In April of 1925, a legendary British explorer named Percy Fawcett launched his final expedition into the depths of the Amazon in Brazil. His destination was the lost city of El Dorado, the &#8220;City of Gold,&#8221; an ancient kingdom of great sophistication, architecture, and culture that, for some reason, had vanished. The idea of El Dorado had captivated anthropologists, adventurers, and scientists for 400 years, though there was no evidence it ever existed. Hundreds of expeditions had gone looking for it. Thousands of men had perished in the jungles searching for it. Fawcett himself had barely survived several previous expeditions and was more determined than ever to find the lost city with its streets and temples of gold.

The world was watching. Fawcett, the last of the great Victorian adventurers, was financed by the Royal Geographical Society in London, the world&#8217;s foremost repository of research gathered by explorers. Fawcett, then age 57, had proclaimed for decades his belief in the City of Z, as he had nicknamed it. His writings, speeches, and exploits had captured the imagination of millions, and reports of his last expedition were front page news.

His expeditionary force consisted of three men--himself, his 21-year-old son Jack, and one of Jack&#8217;s friends. Fawcett believed that only a small group had any chance of surviving the horrors of the Amazon. He had seen large forces decimated by malaria, insects, snakes, poison darts, starvation, and insanity. He knew better. He and his two companions would travel light, carry their own supplies, eat off the land, pose no threat to the natives, and endure months of hardship in their search for the Lost City of Z.

They were never seen again. Fawcett&#8217;s daily dispatches trickled to a stop. Months passed with no word. Because he had survived several similar forays into the Amazon, his family and friends considered him to be near super-human. As before, they expected Fawcett to stumble out of the jungle, bearded and emaciated and announcing some fantastic discovery. It did not happen.

Over the years, the search for Fawcett became more alluring than the search for El Dorado itself. Rescue efforts, from the serious to the farcical, materialized in the years that followed, and hundreds of others lost their lives in the search. Rewards were posted. Psychics were brought in by the family. Articles and books were written. For decades the legend of Percy Fawcett refused to die.

The great mystery of what happened to Fawcett has never been solved, perhaps until now. In 2004, author David Grann discovered the story while researching another one. Soon, like hundreds before him, he became obsessed with the legend of the colorful adventurer and his baffling disappearance. Grann, a lifelong New Yorker with an admitted aversion to camping and mountain climbing, a lousy sense of direction, and an affinity for take-out food and air conditioning, soon found himself in the jungles of the Amazon. What he found there, some 80 years after Fawcett&#8217;s disappearance, is a startling conclusion to this absorbing narrative.

The Lost City of Z is a riveting, exciting and thoroughly compelling tale of adventure.
Click to expand...

I'm about halfway through it and I must say it is quite interesting and very well written.

Think-I-know-it-all leftists and populists really should read this one....Real economics, using real modern day examples and scenarios...I'm a little more than halfway through it.

Can't wait to crack this one.

[ame=http://www.amazon.com/How-Clone-Perfect-Blonde-Science/dp/1594740089]Amazon.com: How to Clone the Perfect Blonde: Using Science to Make Your Wildest Dreams Come&#133;[/ame]

My Grandfather flew B-24's in Europe during WWII so I really enjoyed this one:
"The Wild Blue : The Men and Boys Who Flew the B-24s Over Germany 1944-45" Stephen Ambrose.

I'm currently reading The Left Hand of Darkness by Ursula K. Le Guin. I did take a brief interlude from it to read the Tao Te Ching (presumably) by Lao Tzu.

Currently reading [ame="http://www.amazon.com/Science-Liberty-Democracy-Reason-Nature/dp/0060781505"]The Science of Liberty: Democracy, Reason, and the Laws of Nature[/ame]

The Mission Song by John Le Carre. This is my "keep in the truck so I have something to read when I'm waiting for an appontment or stuck in traffic or something" book

Not remotely his best work, FYI.

Still reading too many at once: still working through Manchester's 'Glory and the Dream,' excellent excellent history, also finishing 'The Modern Mind,' by Peter Watson, great book on the ideas that made the 20th century, Jeremey Waldron's 'Law and Disagreement,' light reading is John Douglas', 'Mind Hunter, on the FBI's elite serial crime unit,' and always lots of poetry.

Next thinking about 'Philosophy, Politics, Democracy: Selected Essays' by Joshua Cohen or 'Rise and Fall of Communism,' by Archie Brown.

Great read thus far, as all of Beevor's books are.

Now that I'm back in a forum site, I'm re-reading:

Author is "a proctologist by training and trade, he realized he was treating the wrong end of most of his patients."

It, TRULY IS, available at amazon.com..

What are you reading?

I'm currently reading "Robinson Crusoe," for the first time, I'm embarrassed to admit. I have decided to make this summer my - "Read all the books my ridiculous English Lit. program skipped so that I could take courses that studied Oprah books or other "non-canon" literature."

I also have a 1-year old son - which means I occasionally need something to read while watching him splash in the baby pool or tackle my poor dogs. So I'm reading the "Twilight" series. Don't judge me! Its trash...but I know that my 14-year old self would have LOVED it.

I'm debating what else to start...I'm thinking about "The Heretic's Daughter," has anyone read that?
B

HUGGY said:
What are you reading?

The Beach House by James Patterson. So far, so good. 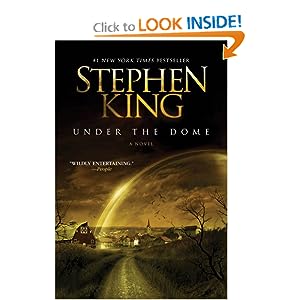 The first thing readers might find scary about Stephen King's Under The Dome is its length. The second is the elaborate town map and list of characters at the front of the book (including "Dogs of Note"), which sometimes portends, you know, heavy lifting. Don't you believe it. Breathless pacing and effortless characterization are the hallmarks of King's best books, and here the writing is immersive, the suspense unrelenting. The pages turn so fast that your hand--or Kindle-clicking thumb--will barely be able to keep up.
Click to expand...

"Why Evolution is True" Jerry A. Coyne

I am reading this stupid message board

Moved on to The Lost Symbol by Dan Brown.
You must log in or register to reply here.

Rooting out the violence among peaceful protests

why do most blacks support a party that loves Margaret Sanger?
2 3 4