Were Most Of America's Founding Fathers - Christians

elektra said:
thou shall not steal, murder, certainly that is shitty law
Click to expand...

Thou shalt not Steal. Thou Shalt not Murder. Are good laws.

Thou shalt not bear false witness. Lying in court or under oath should be illegal. Lying to your buddies about the fish you caught shouldn't.

The rest aren't laws.
I do not go gentle into that good night. I rage.

elektra said:
explain how it is biased, biased against what?
Click to expand...

The 1st commandment says "Thou Shalt Have No Gods Before Me". If you are not Judeo-Christian, that is biased.
I do not go gentle into that good night. I rage.

elektra said:
thou shall not steal, murder, certainly that is shitty law
Click to expand...

Those are called “no brainers” every society knows that

Taxes are the price we pay to live in a civilized society…….Oliver Wendell Holmes

elektra said:
Trump You have not established that there is such a group called Trump's Christians.
Click to expand...

NFBW: The Trump Christians are those that were promised Federal Government worldly power if they supported him to become the Republican nominee starting in IOWA.

There was a “power” meeting before the GOP primary in IOWA between Trump and all the nation’s top right-wing Christian leaders. These Christian’s are Trump’s Christian’s: 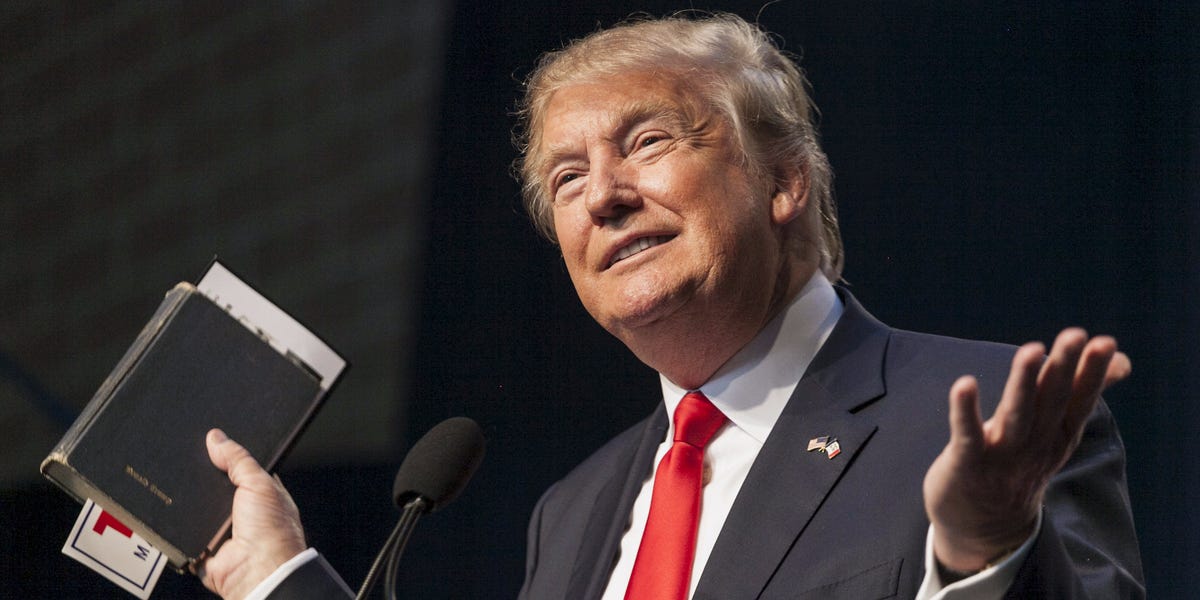 TRUMP: If I'm president, 'Christianity will have power' in the US

"Christianity is under tremendous siege," Donald Trump told his supporters in Iowa.

www.businessinsider.com
But Trump unequivocally embraced the evangelical Christian community throughout the start of his Saturday speech in Sioux Center, Iowa.​
​
"I'm a true believer. And you're many true believers — I hope all — is everybody a true believer in this room? I think so. But Christianity is under tremendous siege," Trump told supporters at Dordt College, a Christian liberal-arts school.​
​
The real-estate mogul lamented that Christians do not wield as much political influence in the US as they could.​
​
"The power of our group of people together, I mean, if you add it up ... it could be 240, 250 million. And yet we don't exert the power that we should have. Now, I think some of the churches are afraid of their tax status, to be honest," he said.​
​
"But you know the fact is that there is nothing the politicians can do to you if you band together. You have too much power. But the Christians don't use their power," Trump said. "We have to strengthen. Because we are getting — if you look, it's death by a million cuts — we are getting less and less and less powerful in terms of a religion, and in terms of a force," he continued.​
​
Trump then complained that big department stores do not say "merry Christmas" during the holidays.​
​
"When they don't want to say 'merry Christmas' in department stores anymore. I won't shop at places that don't say 'merry Christmas.' Guess what? I don't too much shopping," he said to applause. "No, no, it's true. When I see these stores, and they have a red wall and they have nothing on it. They don't want to say 'merry Christmas' anymore. I say, 'Why don't you say merry Christmas?'"​
​
Trump vowed to change the department-store situation when it comes to wishing people "merry Christmas."​
​
"I'll tell you one thing: I get elected president, we're going to be saying 'merry Christmas' again. Just remember that," he said. "And by the way, Christianity will have power, without having to form."​
​
He added: "Because if I'm there, you're going to have plenty of power. You don't need anybody else. You're going to have somebody representing you very, very well. Remember that."​
​
NFBW: Do you really think there is no group that Can be referred to as Trump Christians?

elektra said:
Start a thread, based on whatever premise you think you are addressing.
Click to expand...

Who said I am addressing a premise.

I’m curious as to why you posted that paragraph back in 2014 but you spend your time avoiding an answer on the subject of this thread. IF you think Jefferson was a Christian. if you don’t want to answer I understand. good day!

elektra said:
Trump the Republican? No, not really, how long did Trump belong to the Republican party, a few minutes before he ran? Your idea that Trump is a Republican is really naive.
Click to expand...

I was hoping you were not absurd.

Yes four in ten Catholics are opposed to legal abortion. Many of them are loud and militant about it

DriftingSand said:
I came across a couple of Youtube clips not long ago that were truly enlightening (for me at least). Like most products of the Public School (fool?) System I was kept in the dark concerning the USA's Christian roots. If we (young, impressionable students) were told anything we were told that Jefferson and Franklin were deists but not Christians.

I've come to find out that the two least Christian founders were still sympathetic to and allied with the many devout Christians who helped create the great nation of the United States of America and signed her important, founding documents.

Anyway, please watch these very short videos and let everyone know what you think.

Generally most people were "Christian" at that time. It was pumped into people right from their birth. Difficult to go against the grain. As for Founding Fathers, it would have been something they'd almost be expected to believe in, as a society thing. It's like networking.
"These are my principles. If you don’t like them I have others." Groucho Marx and partisan hacks all over America.

elektra said:
Nationalism? How so, explain.
Click to expand...

frigidweirdo said:
Generally most people were "Christian" at that time.
Click to expand...

What studies have you examined?

Belonging to a church, and being Christian were two very different things.

You firstly have the people doing the statistics. Where did they get them from? Did they literally go around rural America, into the frontier lands and find out how many people went to church? I doubt it.

What about people who didn't have time to go to church because they were working all the time? Or people who lived too far from a church? Or people who made their own churches that weren't acknowledged?

"In 1776, only about 17 percent of the country were church members, compared to about 65 percent today, said Stark, who has tallied church membership as a percentage of the population over the past 250 years using church records and census figures."

So, he went through church records and census figures.

The census back then was... well... unreliable.

"The Census is controversial; up to one-third of all U.S. residents do not respond to repeated reminders. "

"The Census Bureau estimates that in 1970 over six percent of African Americans went uncounted,"

"In the 1850s, census planners suppressed information about slavery due to pressure from Southern lawmakers."

"The results of the 1920 census were ignored and no reapportionment took place, as rural lawmakers feared losing power to urban areas."

"For the first six censuses (1790–1840), enumerators recorded only the names of the heads of household and a general demographic accounting of the remaining members of the household."

"in 1850, the census included inquiries on social issues, such as taxation, churches, pauperism, and crime. "

I can't imagine church records survived in a lot of places, and perhaps weren't very reliable either.

"Beginning in 1850, all members of the household were named on the census."

And again, these numbers weren't asking people if they were Christian. They were records of things that pointed to them being church going people.
"These are my principles. If you don’t like them I have others." Groucho Marx and partisan hacks all over America.

NotfooledbyW said:
Yes four in ten Catholics are opposed to legal abortion. Many of them are loud and militant about it

Start a thread, based on something real

NotfooledbyW said:
I was hoping you were not absurd.
Click to expand...

You are why cant i be

NotfooledbyW said:
Who said I am addressing a premise.

I’m curious as to why you posted that paragraph back in 2014 but you spend your time avoiding an answer on the subject of this thread. IF you think Jefferson was a Christian. if you don’t want to answer I understand. good day!
Click to expand...

If you think he is not, go ahead and start a thread on the subject

rightwinger said:
Those are called “no brainers” every society knows that

Secular laws are superior to Biblical Laws
Click to expand...

Are laws are based on biblical laws

WinterBorn said:
The 1st commandment says "Thou Shalt Have No Gods Before Me". If you are not Judeo-Christian, that is biased.
Click to expand...

So, where is that part of our constitution?

elektra said:
So, where is that part of our constitution?
Click to expand...

It isn't. What IS a part our constitution is "Congress shall make no law respecting an establishment of religion, or prohibiting the free exercise thereof...".
I do not go gentle into that good night. I rage.

I was taught Franklin was a Quaker. Quakers are christians. I learned both of these facts in public school.

On the other hand, who is the "atheists" founding father?
I was taught that some fouders had strange and radical ideas about god and faith, but I have yet to find the atheists amongst them.

Who is the public school claiming is an atheist? Which public schools systems are teaching this?
Click to expand...

What is an atheist? Church pews are full of atheists. A person who really believed in God could not form an insurrection. It is impossible to label the founders of any nation to be Christians. They could have been religiously Christians but I doubt any leader believes in the God of the Bible. Overthrowing authority is Satanic to the core.

ding said:
It matters not which faith system you follow as long as you are genuine in your faith.
Click to expand...

It’s entirely possible that some of the founding fathers didn’t believe in God but never publicly stated as much.

In the time and place they lived in doing so would be almost literally committing suicide.

But even if every one of them were devout Christians, they *clearly* did not intend for Christine doctrine to be the law of the land.

Plus, times change. There isn’t a society on earth today that has the same values it had back in the 18th century. The USA is no exception.
Nobody’s right if everybody’s wrong
-Buffalo Springfield

Are users of faith happy with the response to Donald Sterling?

Is it God or Man who creates tornadoes?

I love my Muslim neighbor!
2

The NEWER Official Discussion Thread for the creation of Israel, the UN and the British Mandate
104 105 106