Trump is failing to decrease regulations by the 70%

Trump is failing to decrease regulations by the 70% he promised. The last time I checked it was 20% reduction...Does this make you mad as a liberterian that he is going back on his promise to you?

To put things in perspective Matthew.....
How long did it take for you to come to the realization that you wanted a Hacadictoffme?
OP

Cut the federal criminal law book in half and legalize pot would be good.

When's the last time government regulations have decreased at all?

20% In seven months is quite impressive. It illustrates just how much more would be done if it were up to him and not reliant on Congress. Further to this, don't forget, he has a hiring freeze on government employees, and deep budget cuts to some divisions. It's called taking stock and taking a hold on the debt which has spiralled out of control.

Not to mention, negotiating lower costs to the taxpayer for major purchases at all levels of government need.

If America is economically stable, jobs are expanding and businesses booming, many problems go ahead, even those red herrings some in the media keep perpetuating.
H

all Trump needs do is NOT add any more rules and regulations and by sheer NOT doing anything he will be so much better than Obama.

These figures come from the first-ever Small Business Regulations Survey, conducted by the National Small Business Association, which of course makes it its business to reduce the regulatory burden on small businesses.
Among other conclusions, the survey found that 44 percent of businesses spend at least 40 hours a year dealing with federal regulations,
and 29 percent spend at least that much on state and local rules.
Three-quarters of business owners say that they have spent time reading proposed rules at least once, and of these, not quite two-thirds discover that more than half the time, the rules they've read wouldn't apply to them.
About 40 percent of respondents claim that they have held off making a new investment because of a regulation at some point in the past.

Twenty-two percent of the business owners found the Obamacare's regulations somewhat burdensome, and 43 percent found it very burdensome. Yet the overwhelming majority of the respondents — 82 percent of them — have 20 or fewer employees. And if a business owner needs to know one thing about the Affordable Care Act, it's this: if you have fewer than 50 employees, the Affordable Care Act does not apply to you, at all.
The $83,000 Question: How Much Do Regulations Really Cost Small Businesses? 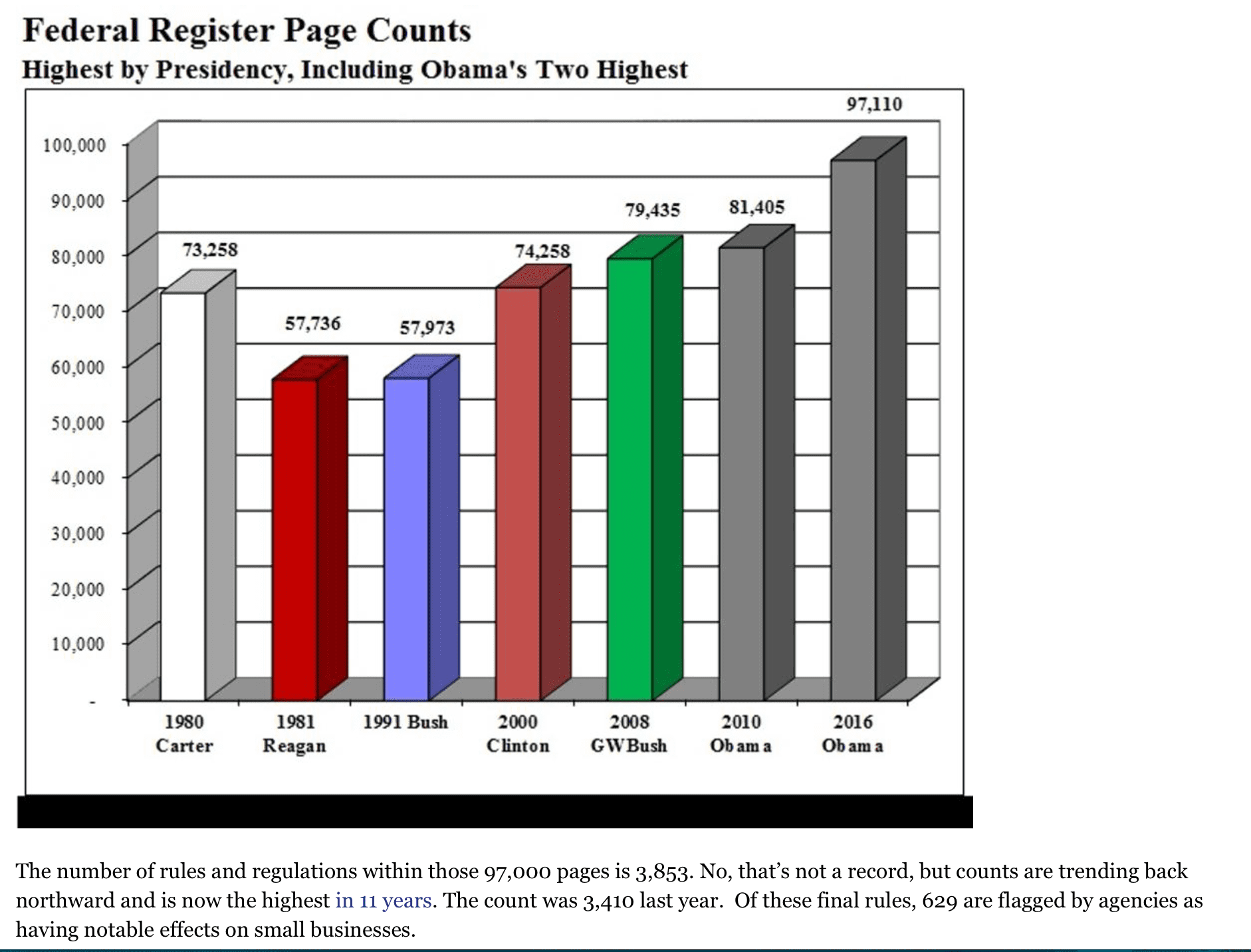 ScienceRocks said:
Does this make you mad as a liberterian that he is going back on his promise to you?
Click to expand...

As a libertarian, I am happy that he at least took a crack at it. I still want more, but I will take what I can get.
You must log in or register to reply here.

How to save the USA

L
Covid relief bill for all. including the trump nuts, and capital rioters

The Left Has A Pedophilia Problem, And It’s Out In The Open
6 7 8

Why Did I Have To Learn So Many Useless Things In School?
2

K
99.999% of fully vaccinated Americans have not died from breakthrough Covid-19 cases

A moment ago
krichton
K

Isn't it great when celebrities go full retard and put it on video?

Thanks to Team Biden, America could soon be on the verge of economic disaster
2 3 4